Freeze trouble to some insects 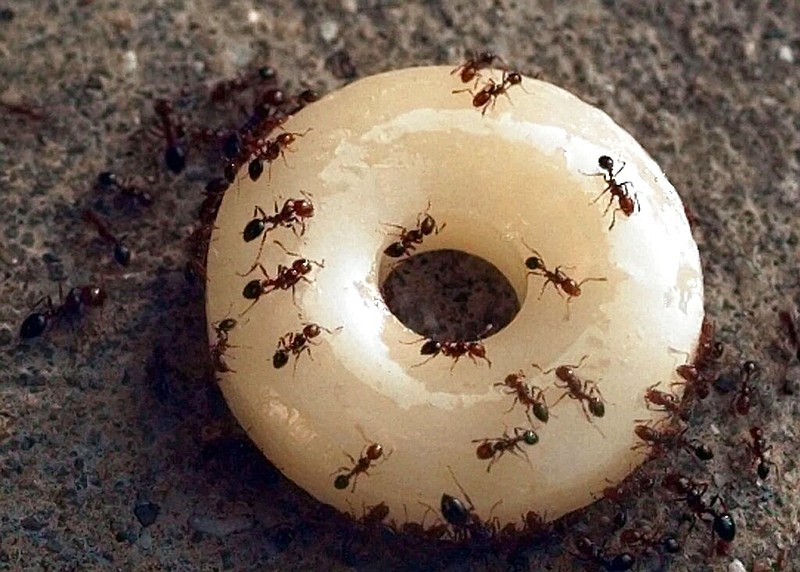 Fire ants converge on a piece of candy in Dallas in this August 1997 file photo. (AP/Eric Gay)

A week of record-low temperatures may leave its mark on Arkansas' fire ant populations, but don't look for the cold to have reduced fly or tick numbers, Kelly Loftin, extension entomologist for the University of Arkansas System Division of Agriculture, said Friday.

In general, Loftin said that "insects that are endemic to our region have evolved various mechanisms to survive cold winters." However, invasives that originate from warmer climates don't have those means for survival.

"Imported fire ants are a good example of an exotic species that can be adversely impacted by extreme cold temperatures," he said. "This pest ant has expanded its range about as far north as it can under normal winter conditions. And north Arkansas is the northern limit of its range.

"Although imported fire ants are native to South America, they survive most Arkansas winters," Loftin said. "However sustained cold can cause a temporary population reduction."

He said that a decade ago, when parts of the state sustained seven days below freezing, "Arkansas' fire ant population experienced a 70 percent reduction in the number of fire ant colonies."

But you can't keep fire ants down for long.

"About 1½ years later, fire ants returned to the prior population level," he said. "Fire ant colonies associated with sidewalks, parking lots, foundations, and other areas tend to survive simply because these structures serve as heat sumps thus preventing colonies from freezing."

Ticks are pretty good at finding protected places to ride out the freezing weather.

"For example, if we have a warm spring, we will see active ticks in March or April," he said. "And during warm spells during winter months you may see an occasional active lone star or American dog tick in January or February. Likewise if temperatures remain cold in the spring, ticks will not become active as early."

Don't count on a week of freezing temperatures to knock out flies.

"The house fly range is worldwide including the Arctic, so obviously we wouldn't expect to see much winter mortality," Loftin said, adding that "our most important livestock flies have different mechanisms to survive cold winters.

House flies and horn flies near cattle survive cold temperatures as larva or pupae under manure piles and other protected breeding material.

The face fly is a pest with a different overwintering strategy as a hibernating adult. Introduced from Europe into Nova Scotia, Canada, around 1950, face flies hibernate in church steeples, attics, barns and other protected areas.

The effects of the deep freeze on row crops pests are uncertain, said Ben Thrash, extension entomologist for the Division of Agriculture.

"We can safely say the redbanded stink bugs and southern green stink bugs will be knocked back for the next several years," he said. "I think many of our native species will be relatively unaffected."

However, the cold's effects on insects that migrate to Arkansas isn't known yet.

"Insects like corn earworm and fall armyworms do overwinter here in Arkansas, the cold should have killed them here, but many of our most damaging corn earworm populations migrate from places like the lower Rio Grande Valley in Texas and south Louisiana," Thrash said. "I'd bet we will still see these insects, but they may just be delayed in getting here."

"I would like to put some data together sometime to see if there are any trends I can pick out with weather and certain species," he said. "Other things like how wet our spring is can also have major effects on our insect populations by promoting weed growth."

To learn about extension and research programs in Arkansas, visit https://uada.edu/