OPINION | GAME ON: It takes grit to survive this dungeon crawler 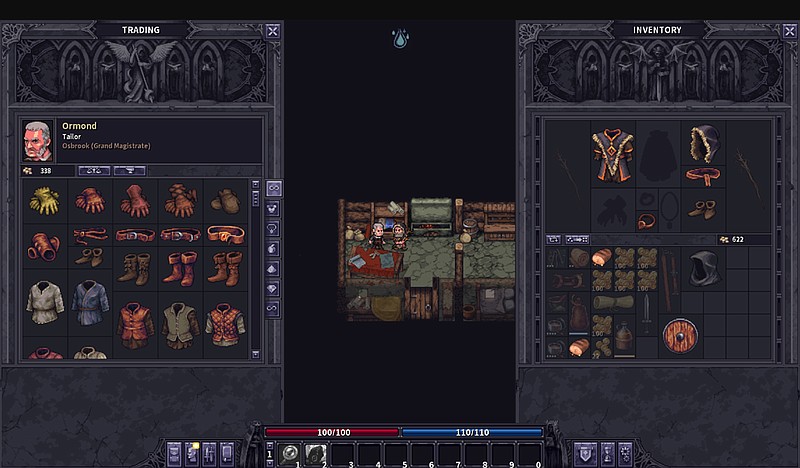 "Stoneshard" is a gritty, grindy medieval role-playing-game roguelike with a lot of promise.

In Early Access now for a year, it has added a lot of content — enough to get a serious feel for what the game promises to deliver — and so far I like what I see. "Stoneshard" is a top-down, turn-based dungeon crawler with gorgeous pixel graphics.

You play as a mercenary fulfilling contracts in a fantasy world piled high with wildlife, bad humans and inhuman monsters. Contracts range from the simple to the serious: Go find certain herbs in the forest, run bandits out of a keep, purge a crypt of its resident necromancer and walking corpses.

After an introductory dungeon experience, players will choose from a handful of pre-made Level 1 characters, each with a unique trait and some initial knowledge in various skills, such as swords or fire magic. Characters have five ability scores — Strength, Agility, Perception, Vitality and Willpower. Each score affects several combat and noncombat abilities. Strength increases melee damage, blocking ability, limb and armor damage, and so on, while Agility increases the chance to dodge and counter attacks and disarm traps.

What "Stoneshard" seems to really get right is the fragility of the average adventurer. And indeed, at the start your chosen adventurer is pretty average. The injury system in "Stoneshard" is unmatched by perhaps any system other than a tabletop RPG experience. Each body part (limbs, torso, head) has its own health status. Damage to one will affect maximum overall hit points, and each can pick up lasting wounds such as bleeding or broken bones. A broken bone must be splinted and a bleeding injury bandaged to staunch the blood.

All these injuries increase your pain stat, which reduces combat effectiveness and can be treated with various herbs or simpler remedies, such as booze. But then booze adds intoxication, which can also be cured with various medicines. But a medicine might increase hunger and thirst significantly or have other side effects, such as negatively affecting Sanity or Morale.

This kind of grittiness makes every combat encounter potentially lethal. A bleeding wound left untreated continues to hemorrhage hit points every turn. But bandaging it leaves your character open to attack, and each step in the process (bandage, then drink, then anti-intoxicant, etc.) means taking another attack on the chin.

The "save" system also contributes to the difficulty. Currently, the game can be saved only at an inn, using a rented room, meaning a lot of progress can be lost during lengthy adventures away from town. In one of my play-throughs, I successfully cleared a fortress of bandits, taking almost no damage, but then triggered two spike traps on the way outside and bled out.

Every action in the game is one turn, and time moves only when you do. Swap weapons? Walk east? Drink some water? Each of those is a turn that advances time and enemy movements. Staying alive often means employing the best cheese strategy possible, such as attacking an enemy from afar with a damaging skill, then walking away and maintaining distance as it chases you while your skill cooldown resets. It's important to note that a lot of the game -- more than half, I'd say — has not been released yet.

The area the player can explore, which includes two towns and a number of fortresses and crypts, is just the start of the adventure. "Stoneshard's" road map includes a mobile base in the form of a caravan, a global map and several major cities, along with a more fully fleshed-out world of competing factions and global threats. The next big update, "City of Gold," is expected in early summer.

"Stoneshard" is still a little early in its development, but the promise is already there. I'm sure veterans of the game, who have mastered its mechanics, can trivialize most of its encounters, but I failed a dozen times to even clear the tutorial dungeon, and I frequently bit off more than I could chew as a novice adventurer.

A tip to remember is that there's no shame in running away from fights you can't win.

The musical score for "Stoneshard" is top-notch, giving a sense of urgency to major fights and dread while exploring dungeons. I'm excited to see what comes next for "Stoneshard" from indie developer Ink Stains.

Print Headline: It takes grit to survive this dungeon crawler