Riding out pandemic with the kids, parents turn to musical theater 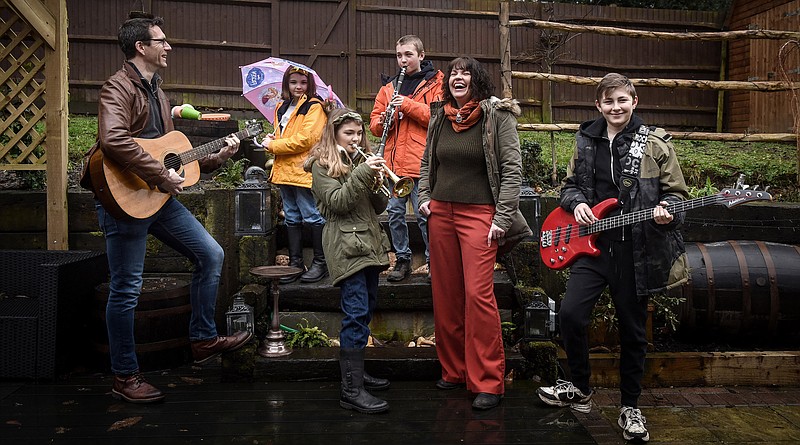 LONDON — The family of six is lined up in front of microphones, ready to perform. The stage: their living room, complete with flowery curtains and family photos. The costumes: for the children, pajamas and bathrobes. The song: Bonnie Tyler's 1983 raspy-voiced power ballad "Total Eclipse of the Heart," tweaked for the pandemic era.

Meet the Marshes — Ben, Danielle, and their four children, Alfie, 14; Thomas, 13; Ella, 11; and Tess, 9 — a family from the English town of Faversham that has gained unexpected fame for their revamped, tongue-in-cheek cover tunes about life in the time of covid. This six-voice choir, with its sweet harmonies and the occasional wobbly note, is creating songs that dramatize the mundane moments of lockdown life, from too much screen time to the horrors of remote learning.

In their version of "One Day More," from the musical "Les Miserables," the parents groan about grocery shopping online during the first lockdown as the children lament: "Our grandparents can't Skype / we're brokenhearted," and "Watch our daddy drink / see our mummy sigh."

And with England crawling through a third national lockdown, they felt the time was ripe for "Total Eclipse":

Used to be bright eyes

Struggling to tell the days apart

It racked up more than 2 million views on YouTube in two weeks.

"We feel a little bit like we can put things into words that sometimes other people wouldn't say — or struggle to say," said Ben Marsh, the father, during a Zoom interview from his home, adding that they hoped to bring people some "fun and family."

In a time when there has been little cause for celebration, the Marshes are some of the many people around the world who have embraced music as a way to boost morale or income, and to cope with a pandemic that has confined many people inside. During the first wave, Italians sang from their balconies, mariachi bands in Mexico played in the streets, and the percussion of people banging pots to celebrate frontline workers became a nightly soundtrack in New York and other cities.

The Marshes have not limited themselves to song; their performances have included moments of bickering, dance — captioned "interpretive angst dance" — and dramatic flourishes that have amused an audience around the world.

"This is the first thing that made me not just smile but laugh out loud," said one fan online who had been depressed about Germany's extending restrictions.

"Can you adopt me?" another joked.

The fame is new, but the singing isn't. Ben Marsh, 44, and Danielle Marsh, 43, who both work at the University of Kent, met as students at Cambridge, where they sang in low-budget university productions. Reworking lyrics was a family affair even pre-pandemic.

"We're always singing songs," Alfie said. "We're in a car, and one of us will say, this'll be a good one to do. It's quite a regular thing."

The difference is those earlier spoofs were mainly for their own entertainment. Then the pandemic hit.

In late March 2020, the family was searching for ways to celebrate birthdays that suddenly had to go remote, including that of Danielle Marsh's mother. Their gift, they decided, would have to go virtual.

"There was no schoolwork; there was no nothing," she said. "That's when the music became a focus for us all."

Ben Marsh, who writes most of the lyrics, uploaded their "One Day More" parody to Facebook, and within a day, they were online sensations.

Invitations for virtual appearances arrived from Jimmy Kimmel and "Good Morning America." Fans drew comparisons to "The Partridge Family" and the von Trapps of "Sound of Music" fame.

On that last comparison, Danielle Marsh would like to set the record straight. "I'm definitely no nun," she said. "I can't make dresses out of curtains."

Not everybody has been pleased with the lyrical decisions. "I can use Zoom," Granddad reportedly grumbled, after the musical ribbing on his lack of Skyping prowess.

So now they're famous, but are they cool? Well, no, Ben Marsh said. "I think if we tried to do 'cool' it would all fall apart."

But at a time when "so few can sing together in one place," the family members hope to use their sudden fame, which he called "bewildering and incredible," to do some good.

They said they are donating the proceeds from guest appearances to the World Health Organization Covid-19 Solidarity Response Fund, which supports efforts to end the pandemic, and Save the Children. But recently they also decided to take a chance by encouraging people to get vaccines, a departure from their more comedic fare.

"We knew we were sticking heads above the parapet," Ben Marsh said. But after hearing stories of vaccine fears from friends and others, "it felt like it was territory worth wading into."

How did they deliver the message? Try replacing "Hallelujah" in Leonard Cohen's iconic song with this (sung by Tess, in fuzzy pajamas, as her father strums the guitar):

The Marsh parents are still grappling with all the attention and what they'll do going forward. They say they want the option to "shut everything down" and return to obscurity. (In perhaps an ominous sign, the cat soiled an archive of newspaper articles Ben Marsh was carefully saving for posterity.)

But they also want to leave their options open. "Nobody's job is secure in the post-pandemic world," Marsh said.

For now, while they added a new laptop to mix music, the process of songwriting remains much the same. Someone, typically Ben Marsh, will offer an idea, which is subject to the children's veto. (They shot down a parody of "Oklahoma!" to be titled "Oh Corona!")

Then they experiment to find the right harmonies, before recording after dinner.

[RELATED: Pandemic star was ready to be born]

Beyond the fame, the online record of their time together has become something of a time capsule. And there have been other upsides.

"I would have never spent this much time with my 14-year-old," Danielle Marsh said. "We wouldn't have had to be together like this."

Still, the children cannot wait to trade musical renown — and endless days at home — for some normalcy. The government has signaled that it hopes to open schools March 8; they can't wait.

"I really want to go back to school, and I want to see my friends in person instead of on a screen," said Tess, the family's self-proclaimed diva.

Until then, they're stuck in place, singing to an equally captive audience. Cue "Total Eclipse:"

Once upon a time we could travel abroad,

Now we barely get in the car.

There's nothing we can do —

We're totally fixed where we are.