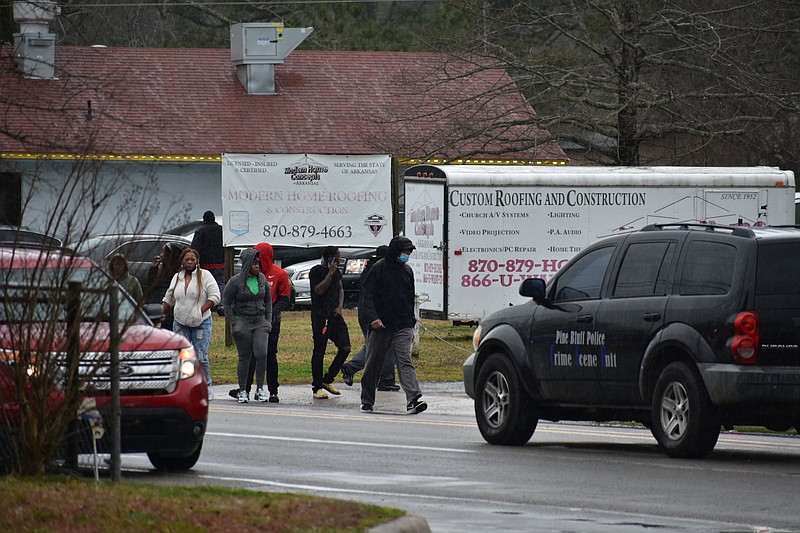 Bystanders walk down Sulphur Springs Road, across from the campus of Watson Chapel Junior High School, on Monday following a shooting at the school that a left a 15-year-old in serious condition. (Pine Bluff Commercial/I.C. Murrell)

A 15-year-old male was listed in "very serious" condition and another was arrested after a shooting at Watson Chapel Junior High School on Monday.

Both the victim and suspect were students at the school, Pine Bluff Police Chief Kelvin Sergeant said during a news conference at 1 p.m. Neither individual was named, but the suspect was described as a 15-year-old Black male.

Sergeant said officers responded to a call of the shooting at 9:59 a.m. The first officers arrived three minutes later.

Officers located a "single male juvenile" who had suffered a gunshot wound inside a building down the hallway from the main office of the school, Sergeant said. The victim was transported to Jefferson Regional Medical Center and transferred to Arkansas Children's Hospital in Little Rock.

The district posted on Facebook at 10:46 a.m. that all students were safe and secure and that the incident was isolated.

Students were changing classes at the time of the incident, which was not an active shooter situation, Sergeant said. But he added the school and Pine Bluff Police Department followed active shooter protocol.

An active shooter, by Federal Bureau of Investigation definition, is somebody who randomly enters any type of a public place and claims more than three victims, Pine Bluff Police Det. David DeFoor said.

"This guy wasn't an active shooter, somebody who just goes somewhere, they're mad and trying to get a body count and just goes in and starts shooting anybody and everybody they possibly can," DeFoor said. "This wasn't that. This was two people who apparently had an issue with each other, directed only at those two."

The suspect was located hiding behind a house in the vicinity of the school by the Arkansas Department of Correction's canine team and arrested by correction department officials, Sergeant said. He was transported to the Pine Bluff Police headquarters and is held at the Jack Jones Juvenile Detention Center, pending filing of formal charges.

"Our thoughts are prayers are with the young man who was shot this morning and his family," Jefferson County Prosecuting Attorney Kyle Hunter said. "... A decision will have to be made in the next 48 hours as to whether to have a probable cause hearing in juvenile court or in adult court. A decision hasn't been made at this time but will be made within the next 36 to 48 hours."

A motive has not been established for the shooting, but Sergeant said police believe it was a targeted incident rather than a random act.

Superintendent Guess said two officers were on campus at the time of the shooting. They are not school resource officers, Guess said, but they are hired by the school district.

One of the officers works as a licensed deputy with the Jefferson County Sheriff's Office, Guess said.

"Both of them are armed and able to engage any intruder if necessary," Guess said.

A resource officer who previously worked on campus returned to street work with Pine Bluff Police due to a shortage of officers, Guess said.

The district does not have standalone metal detectors, but Guess said district officials "will certainly discuss" installing some after Monday's incident.

"We will discuss with the sheriff [and] the police chief what measures they think we need to take," Guess said.

Students were released from campus to their parents and guardians shortly after 11 a.m., according to the district. Chaplains responded to the scene Monday to help students and faculty members cope with any distress, Sergeant said.

Junior high classes will be held virtually today, but staff members will be on campus, Guess said. Sergeant said more officers would be placed at the campus if students returned.

"The principal felt like the students needed some time to process -- if that's the right word -- this tragedy," Guess said. "There were a lot of kids on the junior high campus. I guess they all probably heard the shot. I'm sure it was a very loud gunshot, and there were three of them. And then, the incident occurred in the hall where they had to evacuate the building. And the kids knew these young men. So, [Principal Uyolanda] Wilson felt like it would be better if they worked virtually from home [today] and return Wednesday."

Guess said leaders from surrounding schools offered extra counseling to his district. The Pine Bluff Faith Community Coalition will meet with staff members this morning to provide additional support, as will counselors from other Watson Chapel campuses.

"Many of Chapel's students attend PBFCC churches in the city," coalition President Jesse C. Turner said. "Situations like this compel and demand all clergy to respond."

Monday was the first day in two weeks students reported to campus. Two snowstorms and bitter cold temperatures made icy roads difficult to travel and overstressed the local water system, which sustained leaks and breaks and lowered the water pressure across Pine Bluff, halting food preparation and making sanitation unusable in Watson Chapel and other school districts.

"This was a tragedy on many levels," Guess said. "But it's also a tragedy for Ms. Wilson, who considers those students to be her responsibility and their safety in her hands. And I feel the same way. I feel this is a tragic event."

Pine Bluff police released a statement at 4:15 p.m. Monday correcting a false report issued at 2:54 p.m. that the victim had died. "Bad information was released. The hospital will keep us updated directly to prevent further erroneous information," police said. 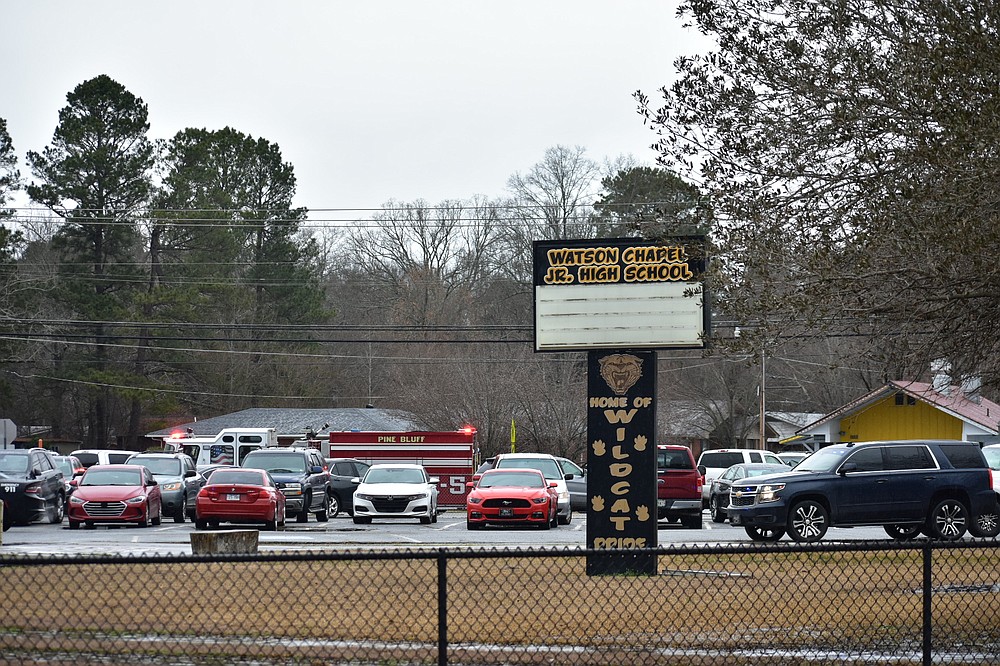 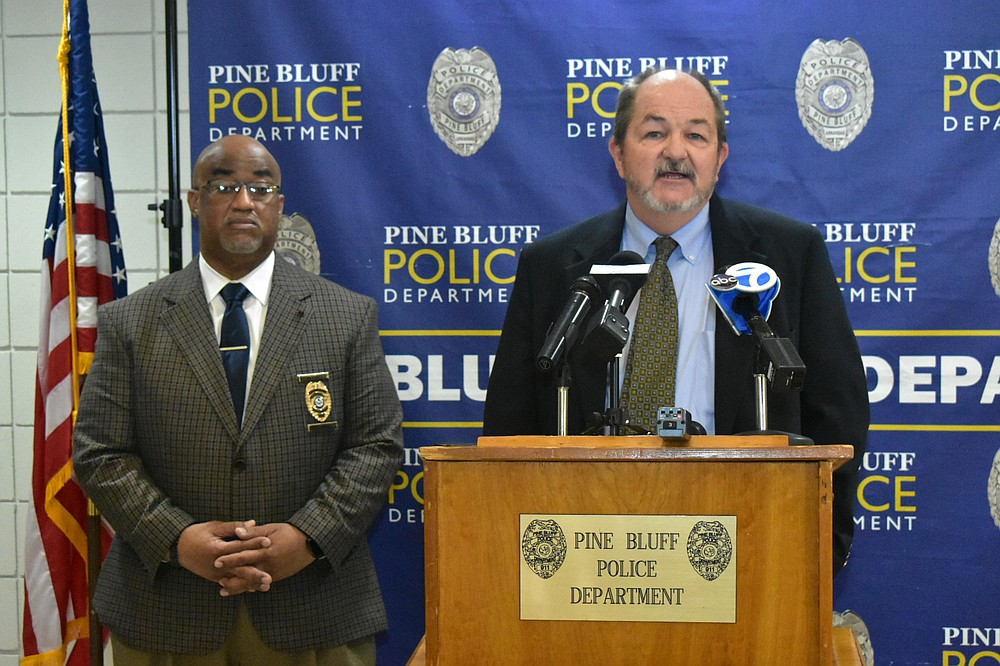 Jefferson County Prosecuting Attorney Kyle Hunter, right, tells local the media his office had not yet decided whether to charge a 15-year-old suspect in a shooting at Watson Chapel Junior High School as a juvenile or adult during a news conference on Monday, at the Pine Bluff Police Department headquarters. Also pictured is Pine Bluff Police Chief Kelvin Sergeant. (Pine Bluff Commercial/I.C. Murrell) 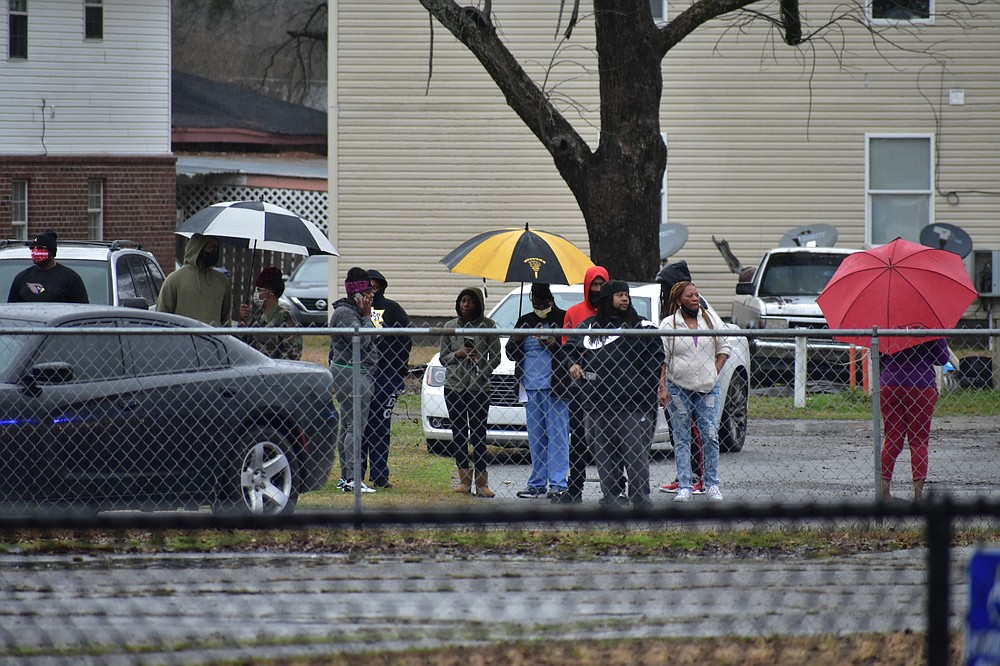 Bystanders look on from Sulphur Springs Road after a report of a shooting at Watson Chapel Junior High School on Monday. (Pine Bluff Commercial/I.C. Murrell) 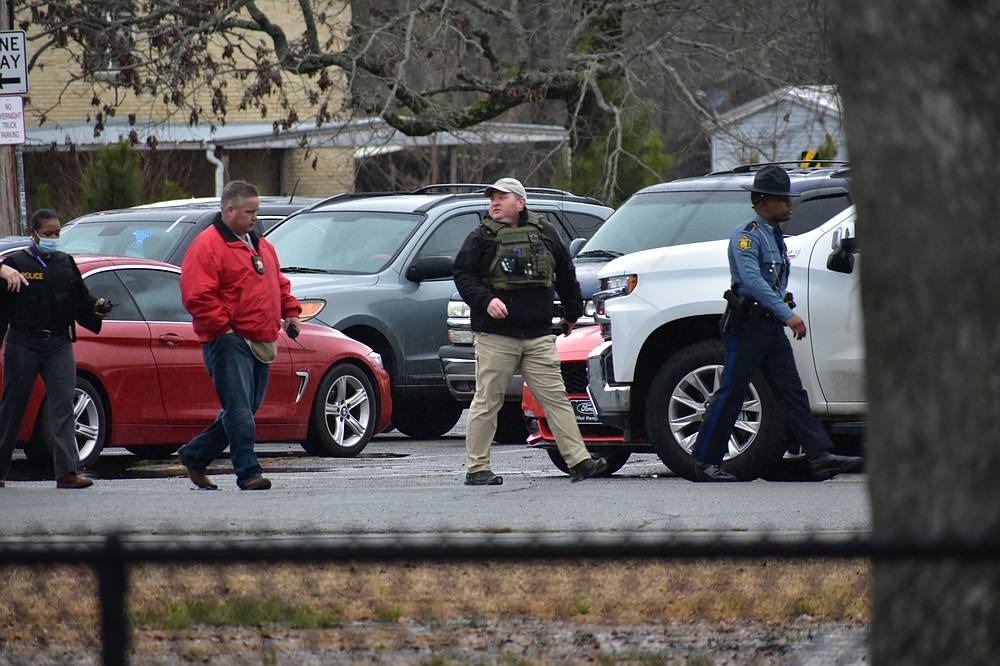 Law enforcement personnel pace the campus of Watson Chapel Junior High School on Monday, after responding to a call of a shooting that left a 15-year-old boy in serious condition. (Pine Bluff Commercial/I.C. Murrell)
ADVERTISEMENT