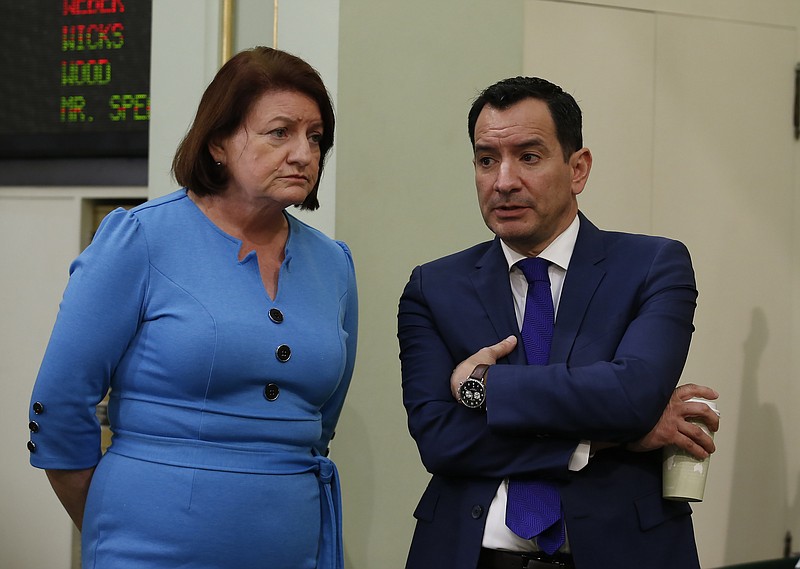 FILE — In this Feb. 19, 2020, file photo, Senate President Pro Tem Toni Atkins, of San Diego, left, and Assembly Speaker Anthony Rendon, of Lakewood, are shown at the Capitol in Sacramento, Calif. California's public schools could get $6.6 billion from the state Legislature if they return to in-person instruction by the end of March, according to a new agreement announced Monday, March 1, 2021, between Gov. Gavin Newsom and the state's legislative leaders. (AP Photo/Rich Pedroncelli, File)

SACRAMENTO, Calif. -- California's public schools could tap into $2 billion from the Legislature if they return to in-person instruction by the end of March, according to a new agreement announced Monday between Gov. Gavin Newsom and the state's legislative leaders.

California, the most populous state, has 1,037 public school districts, more than 6.1 million students and about 319,000 teachers.

[Video not showing up above? Click here to watch » https://www.youtube.com/watch?v=ayE_X6KgFBU]

Most public school classes have not been held in-person since March of last year because of the coronavirus. Many districts have struggled to reach agreements with teachers' unions on the best way to return students and staff to the classroom.

Newsom, who could face a recall election later this year spurred by his handling of the pandemic, had been at odds with legislative leaders on the best way to encourage school districts to return students to the classroom. Monday's announcement marked a turn, with Newsom, Senate President Pro Tempore Toni Atkins and Assembly Speaker Anthony Rendon praising each other for reaching an agreement. All are Democrats.

The deal sets aside $6.6 billion for schools, with $2 billion for schools that return to in-person instruction by March 31. The remaining $4.6 billion, which is not contingent on a return to classrooms, will be distributed among schools to help with learning loss through actions such as targeted interventions for vulnerable students or extending the school year and summer school options.

Newsom cast the reopening of schools as essential to getting California's economy back on track and as a move toward gender equity, as mothers have shouldered much of the burden of taking care of kids at home.

"You can't reopen your economy unless you get your schools reopened for in-person instruction," he said.

California school districts are controlled locally, but the state can incentivize them to act with money. Newsom declined to answer when asked whether he's considered trying to mandate they return should some districts choose not to reopen.

The officials said testing is required for schools in regions that fall under the most restrictive level -- known as the purple tier. But school districts that have already reopened or have plans to reopen in March would be exempt from testing requirements, the officials said.

Jeff Freitas, president of the California Federation of Teachers, said the plan doesn't meet every benchmark the union sought but does make progress from prior plans. The prioritization of vaccines for teachers -- 10% of the state's allocation with a minimum of 75,000 per week -- is "a huge victory," he said. Newsom announced the focus on teacher vaccinations last month but the plan writes it into state law.

"The biggest thing I take away from here is that we are providing vaccines for educators," Freitas said.

Meanwhile, thousands of Chicago Public Schools students returned to school on Monday morning, the second -- and largest -- wave of students to go back to classrooms after almost a year of remote learning because of the coronavirus pandemic.

Next Monday, another 18,500 students -- sixth, seventh and eighth grades -- who opted for in-person learning in the nation's third-largest school district will be allowed back into their schools.

On Monday, Mayor Lori Lightfoot and Chicago Public Schools CEO Janice Jackson welcomed students back to Hawthorne Elementary School in the Lakeview neighborhood on the city's North Side.

"This is exactly what we fought for," said Lightfoot, in an apparent reference to the contentious negotiations with the Chicago Teachers Union that delayed the reopening of schools. "This is the moment that we knew would be possible and important in the lives of our young people. ... That's why this giving parents an option to come back in-person for their students was so important."

Information for this article was contributed by Don Babwin of The Associated Press. 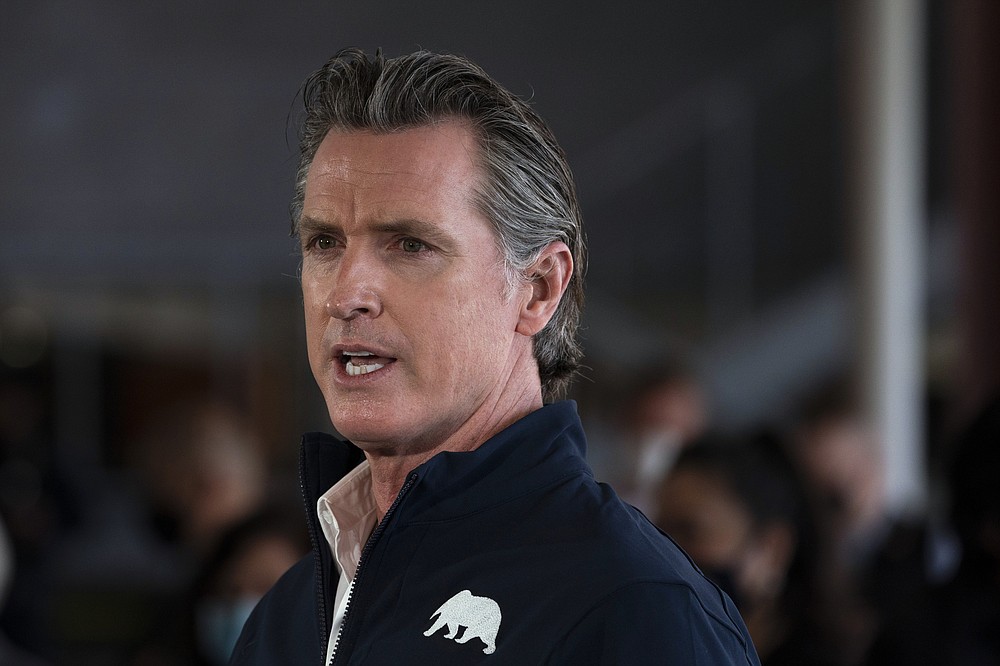 FILE - California Gov. Gavin Newsom speaks during a news conference on the campus of California State University of Los Angeles in Los Angeles, in this Tuesday, Feb. 16, 2021, file photo. California's public schools could get $6.6 billion from the state Legislature if they return to in-person instruction by the end of March, according to a new agreement announced Monday, March 1, 2021, between Gov. Gavin Newsom and the state's legislative leaders. (AP Photo/Jae C. Hong, File) 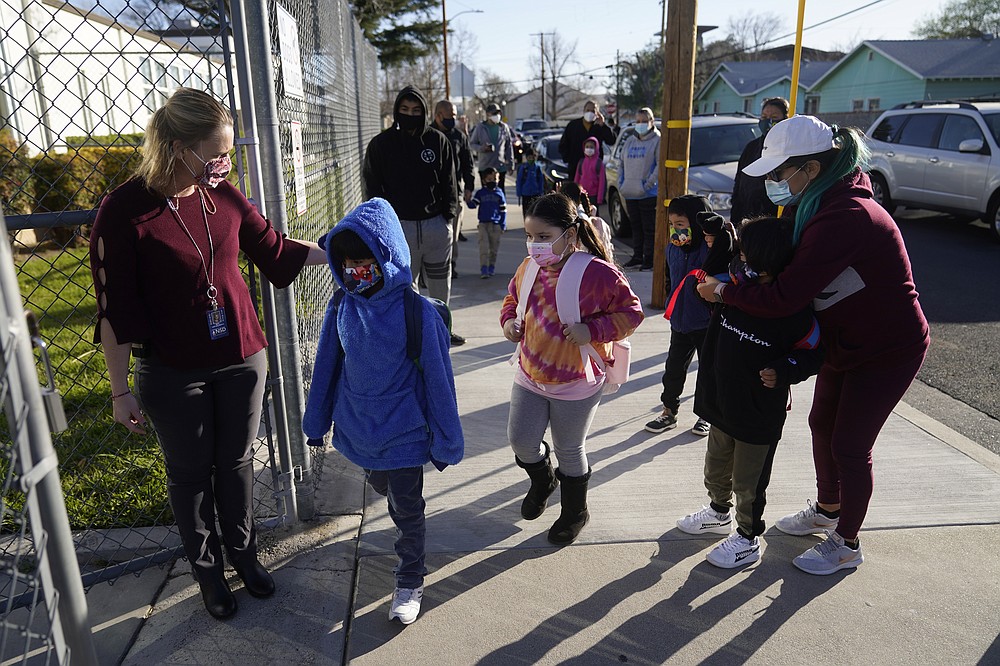 FILE - In this Feb. 25, 2021, file photo, Assistant Principal Janette Van Gelderen, left, welcomes students at Newhall Elementary in Santa Clarita, Calif. California's public schools could get $6.6 billion from the state Legislature if they return to in-person instruction by the end of March, according to a new agreement announced Monday, March 1, 2021, between Gov. Gavin Newsom and the state's legislative leaders. (AP Photo/Marcio Jose Sanchez, File)
ADVERTISEMENT