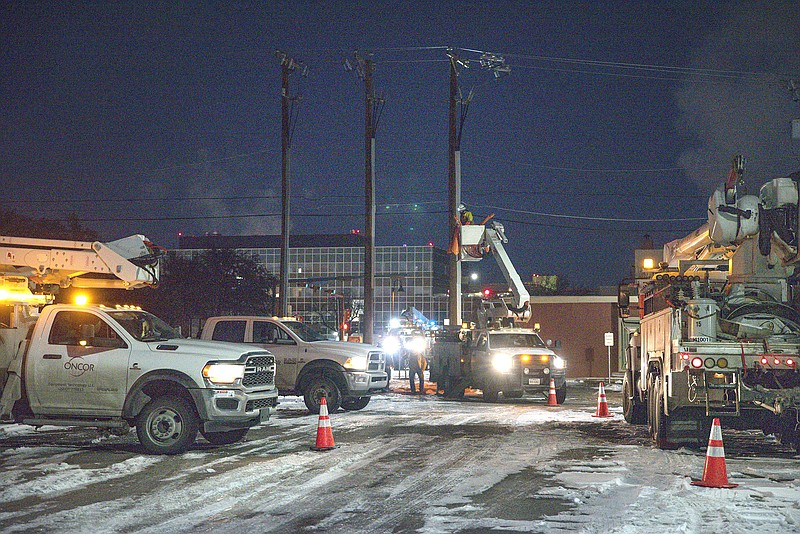 An Oncor Electric Delivery lineman crew works on repairing a utility pole that was damaged by the winter storm that passed through Texas Thursday, Feb. 18, 2021, in Odessa, Texas. (Eli Hartman/Odessa American via AP)

The largest power generation and transmission cooperative in Texas has filed for bankruptcy protection after power failures that caused a national energy crisis during February's winter freeze.

Brazos Electric Power Cooperative has filed for Chapter 11 in the U.S. Bankruptcy Court for the Southern District of Texas, according to a statement. It listed both estimated assets and liabilities of $1 billion to $10 billion.

Brazos, which serves 16 distribution member cooperatives and one municipal system that cater to more than 1.5 million Texans across 68 counties from the Texas Panhandle to Houston, said Monday that it was a "financially robust, stable company" before the severe cold weather that hit Texas in md-February.

Much of Texas' power grid collapsed, followed by its water systems. Tens of millions of people huddled in frigid homes. Others fled for safety. The state, long suspicious of regulation and outside help, was left to seek aid from other states and humanitarian groups as many of its 29 million people struggled for survival.

Brazos said it received excessively high invoices from the Electric Reliability Council of Texas -- the state's grid operator -- for collateral and for the purported cost of electric service. The invoices were required to be paid within days. As a cooperative, Brazos' costs are passed through to its members and retail consumers served by its members. Brazos decided that it won't pass on the council's costs to its members or the consumers.

"Let me emphasize that this action by Brazos Electric was necessary to protect its member cooperatives and their more than 1.5 million retail members from unaffordable electric bills as we continue to provide electric service throughout the court-supervised process," Clifton Karnei, executive vice president and general manager of Brazos, said in a statement.

Brazos said it will continue to supply power to members as it restructures the cooperative while under bankruptcy protection.

Griddy charges $10 a month to give people a way to pay real-time wholesale prices for electricity instead of a fixed rate, therefore passing the costs straight on to consumers. But when temperatures plummeted well below freezing last month, wholesale prices spiked and Griddy customers were left with sky-high electricity bills.

The council shifted about 10,000 Griddy customers to other utilities Friday. Griddy said the council "took our members and have effectively shut down Griddy." Griddy was barred from participating in the state's power market Feb. 26 because of nonpayment, according to a market notice seen by Bloomberg News.

"We have always been transparent and customer-centric at every step. We wanted to continue the fight for our members to get relief and that hasn't changed," Griddy said.

The Brazos bankruptcy is likely to be one of many after four million homes and businesses went without heat, light and water during the deep freeze. The disaster caused as much as $129 billion in economic losses. The state's broader market set a record for the most expensive week of power in U.S. history. The effect on individual companies is only starting to emerge, with some racking up huge losses while oil and gas producers saw their output halted.

DeAnn Walker, chairwoman of the Public Utility Commission, is the highest-ranking official to step down in the aftermath of the power failures.

Gov. Greg Abbott appointed Walker to the commission in 2017, and she is one of two commissioners who used to work in his office. She is also a former attorney and executive at CenterPoint Energy, one of Texas' largest electricity retailers.

Abbott, a Republican, blamed the power failures on the electric council. But the three-member commission appointed by Abbott has oversight authority over the council.

Information for this article was contributed by Eduard Gismatullin and Rachel Morison of Bloomberg News (WPNS), and by Michelle Chapman and Jim Vertuno of The Associated Press.