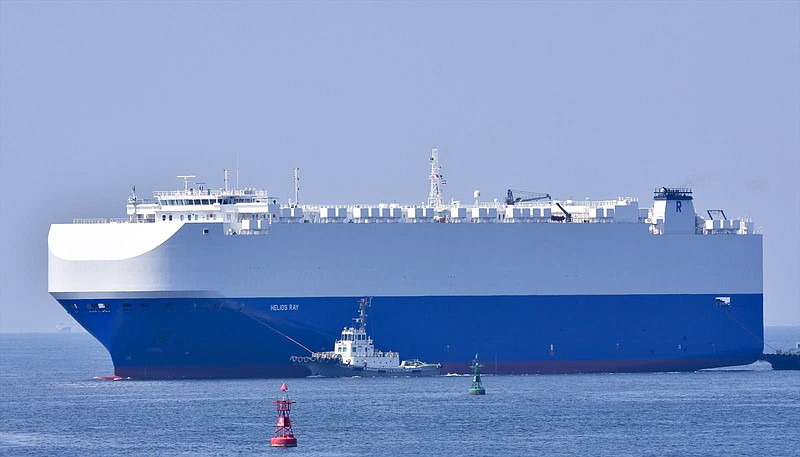 In this Aug. 14, 2020, photo, the vehicle cargo ship Helios Ray is seen at the Port of Chiba in Chiba, Japan. An explosion struck the Israeli-owned Helios Ray as it sailed out of the Middle East on Friday, Feb. 26, 2021, an unexplained blast renewing concerns about ship security in the region amid escalating tensions between the U.S. and Iran. (Katsumi Yamamoto via AP)

JERUSALEM -- Israeli Prime Minister Benjamin Netanyahu on Monday accused Iran of attacking an Israeli-owned ship in the Gulf of Oman last week, an explosion that further spiked security concerns in the region.

Without offering any evidence, Netanyahu told Israeli public broadcaster Kan that "it was indeed an act by Iran, that's clear."

"Iran is the greatest enemy of Israel, I am determined to halt it. We are hitting it in the entire region," Netanyahu said. Iran promptly dismissed the charges.

The blast struck the Israeli-owned MV Helios Ray, a Bahamian-flagged roll-on, roll-off vehicle cargo ship, as it was sailing out of the Middle East on its way to Singapore on Friday. The crew was unharmed, but the vessel sustained two holes on its port side and two on its starboard side just above the waterline, according to American defense officials.

The ship came to Dubai's port for repairs Sunday, with the blast reviving security concerns in Mideast waterways amid heightened tensions with Iran.

The explosion recalled the tense summer of 2019, when the U.S. military accused Iran of attacking several oil tankers in the Gulf of Oman with limpet mines, designed to be attached magnetically to a ship's hull. The gulf leads through the narrow Strait of Hormuz, a vital passage for the world's oil supplies. Tehran has denied the accusations that it was behind the limpet mine attacks.

It remains unclear what caused Friday's blast on the Helios Ray. The vessel had discharged cars at various ports in the Persian Gulf before the explosion forced it to reverse course. Over the weekend, Israel's defense minister and army chief both indicated they held Iran responsible for what they said was an attack on the vessel.

Iran responded to Netanyahu's statement saying it "strongly rejected" the claim that it was behind the attack. In a news briefing, Foreign Ministry spokesman Saeed Khatibzadeh said Netanyahu was "suffering from an obsession with Iran" and described his charges as "fear-mongering."

Khatibzadeh also accused Israel of taking "suspicious actions in the region" against Iran in recent months to undermine the 2015 nuclear deal, without elaborating, and vowed Iran would respond.

"Israel knows very well that our response in the field of national security has always been fierce and accurate," he said.

Overnight, Syrian state media reported a series of airstrikes near Damascus that it linked to Israel, saying air defense systems had intercepted most of the missiles. Israeli media reports said the airstrikes were on Iranian targets in response to the ship attack.

Israel has struck hundreds of Iranian targets in neighboring Syria in recent years, and Netanyahu has repeatedly said Israel will not accept a permanent Iranian military presence there. Iran and its Lebanese proxy Hezbollah have provided military support to Syrian President Bashar Assad in the more than decadelong Syrian civil war.

Iran has sought to pressure the U.S. to lift sanctions on Tehran as President Joe Biden's administration considers options for returning to negotiations with Iran over its nuclear program. Biden has said repeatedly the U.S. would return to the nuclear deal between Tehran and world powers that former President Donald Trump withdrew from in 2018 only after Iran restores its full compliance with the accord.

Iran said Sunday that it would reject an early meeting with the United States and European signatories to the deal because of their "recent positions and actions."

But in comments that reflected the administration's belief that Iran's rejection of early talks is more posturing than a closed door, Psaki said, "We remain ready to reengage in meaningful diplomacy to achieve a mutual return to compliance with JCPOA commitments," referring to the Joint Comprehensive Plan of Action, the formal name of the nuclear deal.

Psaki said the administration would consult "at every level" with European partners, Russia and China on the best way forward.

"We do view this, though, as a part of a diplomatic process to determine the way forward, and that's what we'll be engaging in from the present on," she said.

Information for this article was contributed by Ilan Ben Zion, Isabel DeBre and Nasser Karimi of The Associated Press; and by Loveday Morris and Karen DeYoung of The Washington Post. 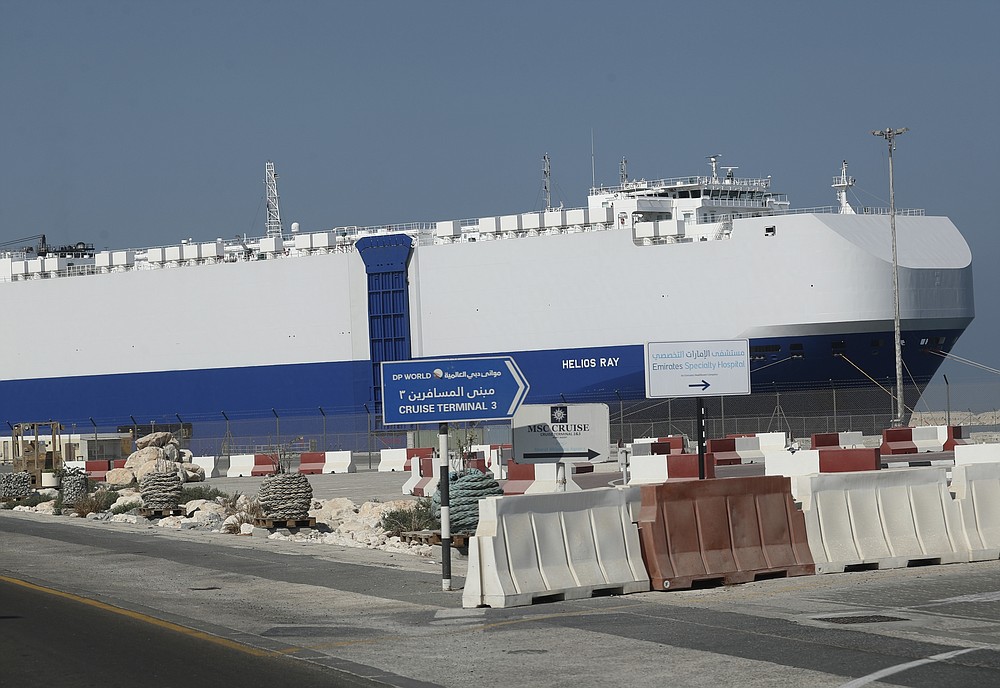 The Israeli-owned cargo ship, Helios Ray, sits docked in port after arriving earlier in Dubai, United Arab Emirates, Sunday, Feb. 28, 2021. The ship has been damaged by an unexplained blast at the gulf of Oman on Thursday. (AP Photo/Kamran Jebreili)
ADVERTISEMENT