States let down guard in spite of expert warnings 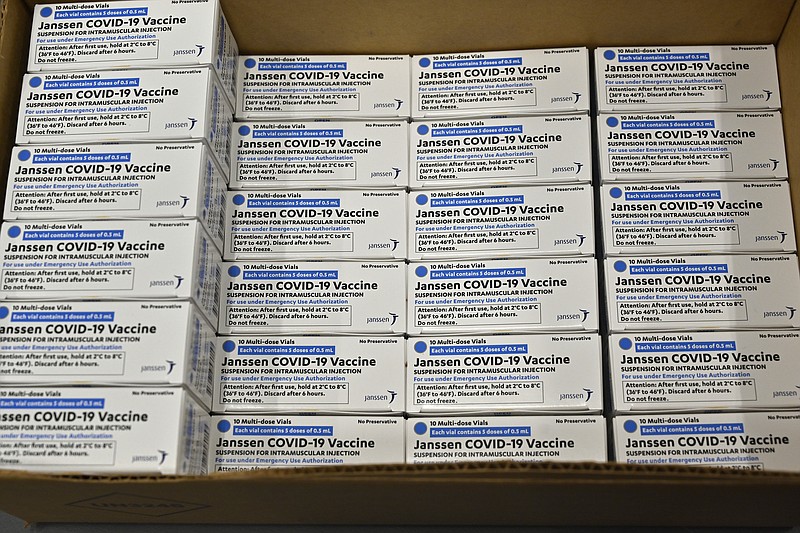 MISSION, Kan. -- With the U.S. vaccination drive picking up speed and a third shot on the way, states eager to reopen for business are easing coronavirus restrictions despite warnings from health experts that the outbreak is far from over and that moving too quickly could prolong the misery.

In Missouri, where individual communities get to make the rules, the two biggest metropolitan areas -- St. Louis and Kansas City -- are relaxing some measures. The town of Lawrence, home to the University of Kansas, now lets establishments stay open until midnight.

"I think that people are excited to put this past them and be able to start to get back to their ways of doing things," Lee said.

The push to reopen comes as covid-19 vaccine shipments to the states are ramping up. Nearly 20% of the nation's adults -- or more than 50 million people -- have received at least one dose of vaccine, and 10% have been fully inoculated 2½ months into the campaign to snuff out the virus, according to the Centers for Disease Control and Prevention.

Johnson & Johnson shipped out nearly 4 million doses of its newly authorized, one-shot vaccine Sunday night to be delivered to states for use starting today. The company says it will deliver about 16 million more doses by the end of March and a total of 100 million by the end of June.

That adds to the supplies being distributed by Pfizer and Moderna and should help the nation amass enough doses by midsummer to vaccinate all adults. The White House is encouraging Americans to take the first dose available to them, regardless of manufacturer.

But the efforts come with strong warnings from health officials against reopening too quickly, as worrisome coronavirus variants spread.

On Monday, the head of the CDC, Dr. Rochelle Walensky, warned state officials and ordinary Americans not to let down their guard, saying she is "really worried about reports that more states are rolling back the exact public health measures that we have recommended."

"I remain deeply concerned about a potential shift in the trajectory of the pandemic," she said. "We stand to completely lose the hard-earned ground that we have gained."

Cases and hospitalizations have plunged since the end of January, and deaths have also dropped sharply, but they are still running at dangerously high levels and have even risen slightly over the past several days.

The vaccine is contributing to a decrease in severe cases and deaths among older people, and is "quickly becoming a bigger contributor" nationally, Justin Lessler, an expert in infectious diseases at Johns Hopkins University, said in an email.

"I suspect we will see it overtake natural infection as the biggest driver of immunity late spring earliest, more likely midsummer," Lessler said.

Dr. Amesh Adalja, an infectious disease specialist at Johns Hopkins, said he believes states and cities have leeway to ease some restrictions because hospitals no longer are at capacity in most communities. But "I do think that masks are likely going to need to be kept in place for some time until we get more of our vulnerable populations vaccinated," he said.

"It is important for restaurants who are increasing their capacity to remember that we are still in a pandemic and to continue to follow some of those rules," Adalja said.

The Biden administration wants to see all three vaccines distributed evenly, while also acknowledging that the easy-to-handle Johnson & Johnson vaccine will be used in pop-up mobile sites and locations without freezer storage capacity.

States are hoping that the surging vaccine supply will help tamp down new infections.

In Massachusetts, Gov. Charlie Baker lifted restaurant capacity limits entirely. Theaters can open at 50% capacity, with a maximum of 500 people. And capacity limits across all businesses have been raised to 50%.

Las Vegas on Monday became the latest of the nation's largest school districts to return children to classrooms. Pre-K children to third-graders will go back two days a week, with other grades to be phased in by early April.

Iowa Gov. Kim Reynolds recently lifted mask requirements and limits on the number of people allowed in bars and restaurants.

And in California, Gov. Gavin Newsom and legislative leaders reached an agreement aimed at getting most children back in classrooms by the end of March. Under the deal announced Monday, school districts could receive up to $6.6 billion if they reopen by March 31.

The U.S. ranks fourth in the world, behind Israel, the United Arab Emirates and Britain, in the number of doses administered relative to the population, according to data compiled by the University of Oxford.

President Joe Biden fell well short of his goal of setting up 100 new federally operated mass-vaccination sites by the end of February, with just seven up and running.

White House vaccination coordinator Jeff Zients also acknowledged that scheduling of vaccination appointments "remains too difficult in too many places." But he said the White House is working with states to improve scheduling systems and is exploring federal support for call centers to make it easier for people to get appointments. 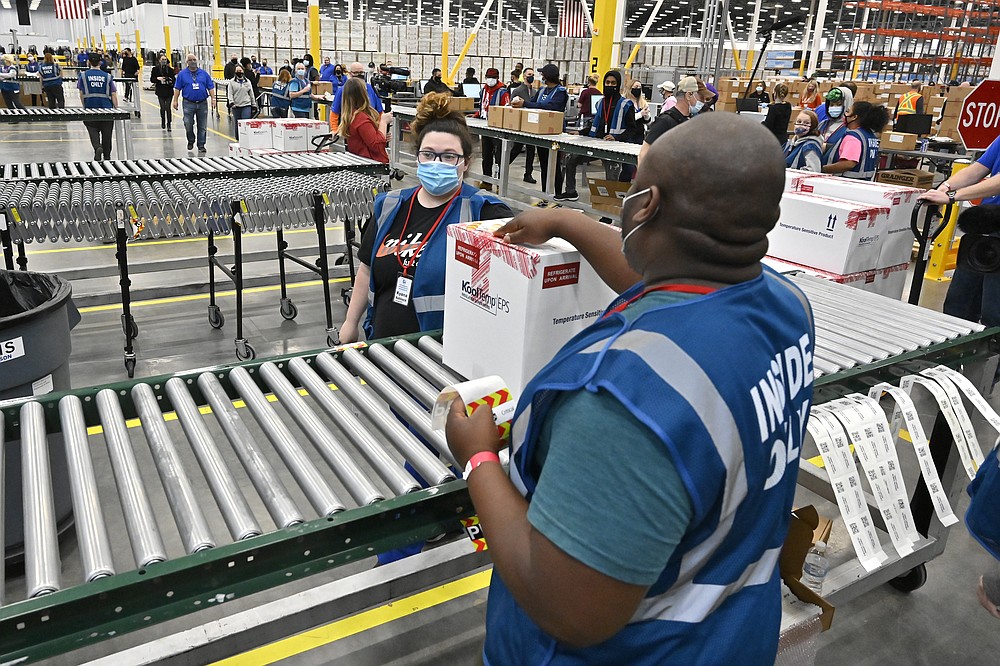 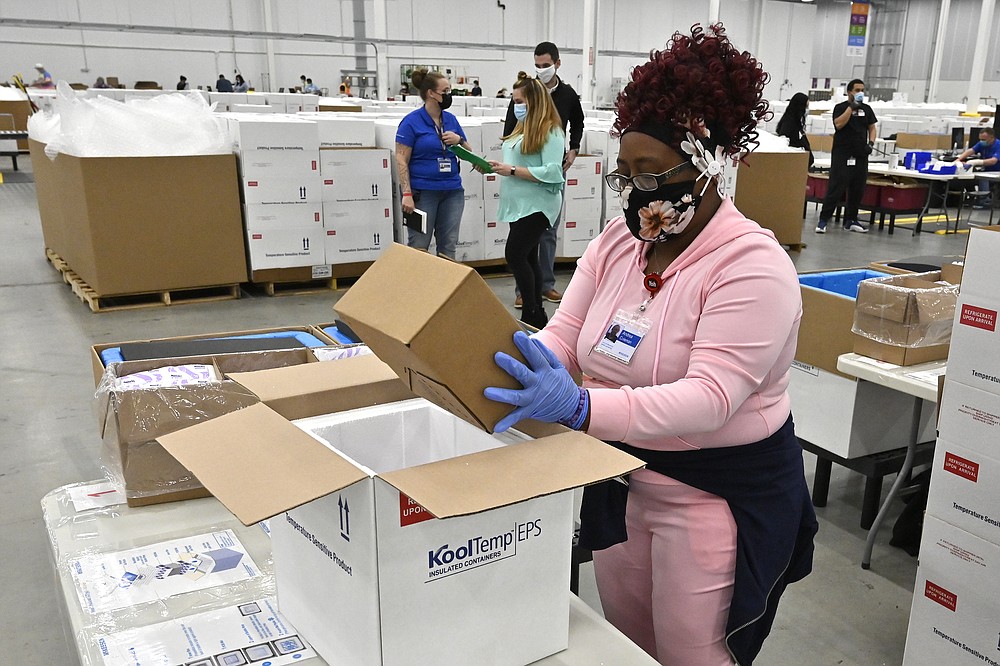 An employee with the McKesson Corporation packs a box of the Johnson and Johnson COVID-19 vaccine into a cooler for shipping from their facility in Shepherdsville, Ky., Monday, March 1, 2021. (AP Photo/Timothy D. Easley, Pool) 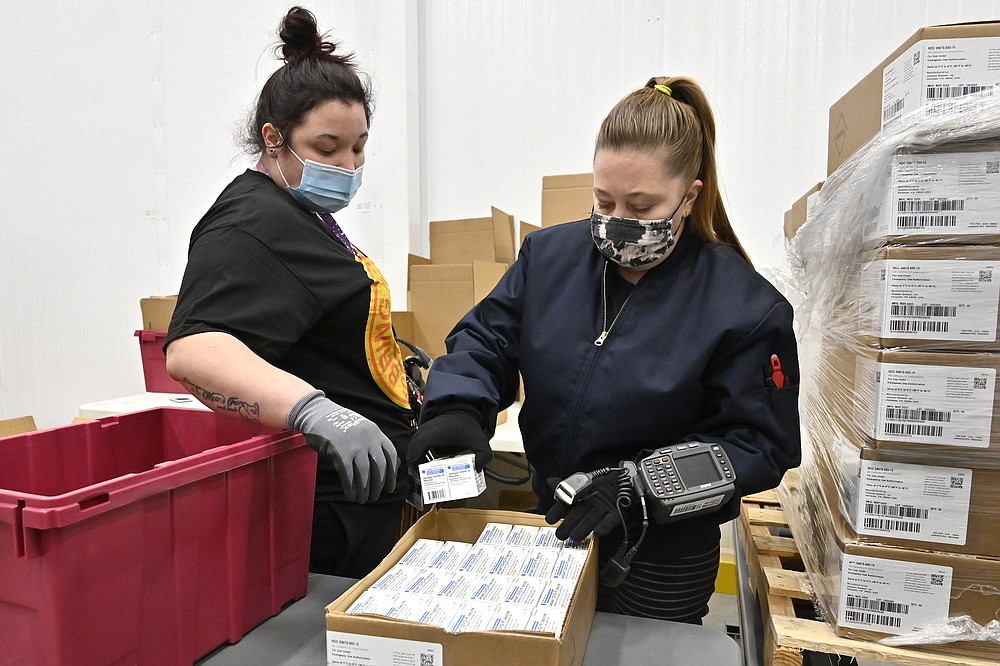 Employees with the McKesson Corporation scan a box of the Johnson & Johnson COVID-19 vaccine while filling an order at their shipping facility in Shepherdsville, Ky., Monday, March 1, 2021. (AP Photo/Timothy D. Easley, Pool) 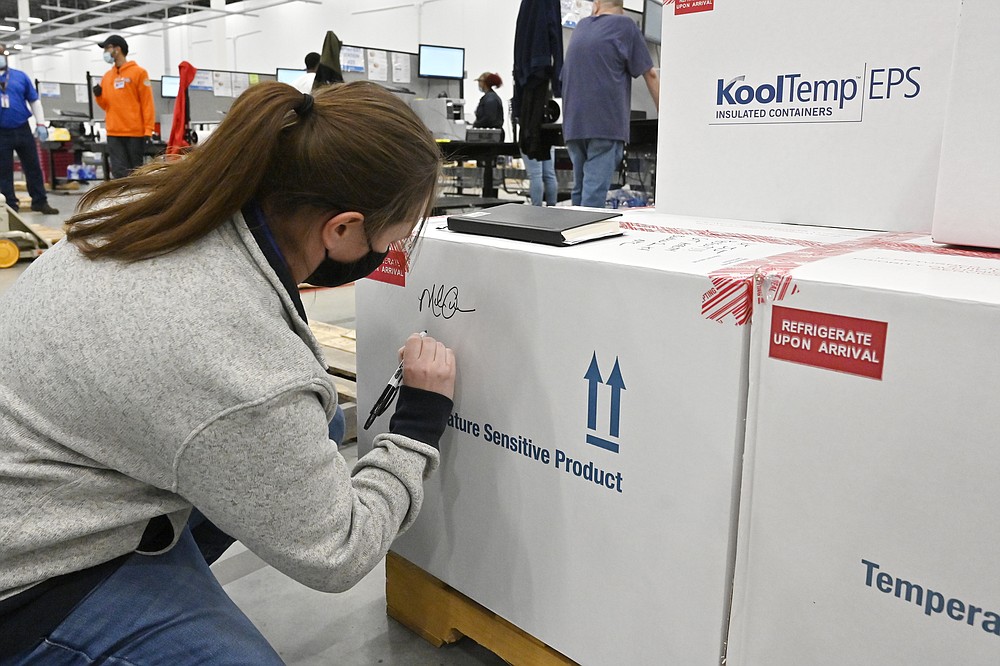