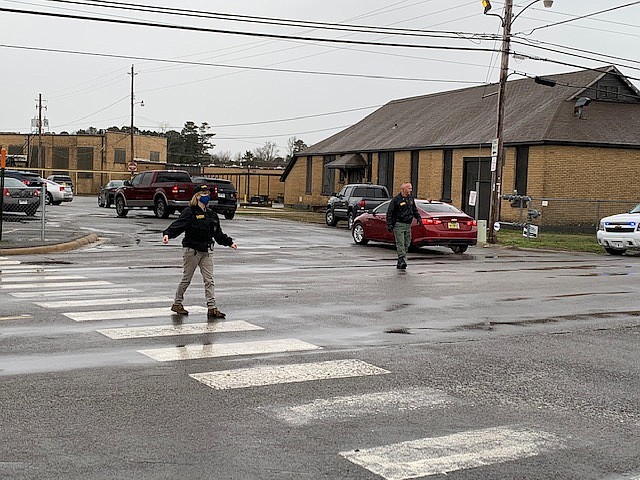 Authorities work near the scene of a shooting at Watson Chapel Junior High School in Pine Bluff on Monday.

The 15-year-old victim in an on-campus shooting at Watson Chapel Junior High School has died, his mother announced Wednesday on social media.

Daylon Burnett died Wednesday, two days after he was shot in a hallway near the school library.

“Y’all my boy got his wings at 5:35 p.m.,” Keisha Lee wrote Wednesday on Facebook, posting a photo of her with her son.

“Our thoughts and prayers are with his family and friends,” the district posted.

Hours earlier, the suspect in Burnett's shooting was charged with battery in the first degree, though Jefferson County Prosecuting Attorney Kyle Hunter had told District Court Judge Kim Bridgforth that if the victim died, new charges would reflect that.

A teenage suspect accused of shooting a fellow student Monday at Pine Bluff’s Watson Chapel Junior High School was ordered to be held on a charge of first-degree battery during a probable-cause hearing Wednesday morning.

District Court Judge Kim Bridgforth found probable cause for the charge and ordered that Thomas Quarles, 15, be held in lieu of $1 million bail, granting the request of Jefferson County Prosecuting Attorney Kyle Hunter.

Quarles is accused of shooting Daylon Burnett, another 15-year-old male, in a school hallway in front of the library. Burnett is listed in “critical care” in the intensive care unit at Arkansas Children’s Hospital, Hunter said.

The suspect and victim are students at the junior high school, authorities have said.

According to the affidavit, Pine Bluff police officers responded to a shooting at the campus at 9:59 a.m. Monday. An officer said in a report Hunter read that “she was met by various school staff” and directed to the location of the shooting. One of the nurses was administering aid to Burnett when the officer arrived.

“The victim was breathing,” Hunter read in the report. “There was a slight pulse as the nurse was applying pressure to the back of the victim’s head.”

Officers found two .380-caliber shell casings next to the victim, according to the report. Officers then began clearing the school for potential gunmen, and a female student allegedly told a detective that Quarles shot the victim.

The detective stated she knew Quarles from “prior encounters,” according to the affidavit that Hunter read, and police obtained a description of him and what he was wearing — khaki pants and a hooded sweatshirt.

Quarles was reportedly last seen leaving campus and heading to Sulphur Springs Road before he was arrested. A Jefferson County sheriff’s office investigator and the Arkansas Department of Correction K-9 search team sought him on foot, and when the K-9 search team reached East Greenway Drive, a K-9 officer advised authorities of an individual with a burgundy top with khaki pants running behind a house at the end of East Greenway Drive. An officer continued tracking north toward that street, and as the K-9 search team approached the east side of the residence, the teen was located behind an air conditioner unit.

Quarles, who was taken to the Jack Jones Juvenile Detention Center, where he is being held, and he and his mother told authorities they would hire a lawyer and declined to answer questions.

“Because of the seriousness of this act and the likelihood Mr. Quarles would leave the jurisdiction if he was let out, the condition of the victim in this case, the state is asking the court to set a bond of $1 million, and that he be held, pursuant to that bond,” Hunter told Bridgforth.

A return date to the courtroom for Quarles has been set for April 12, with the hearing to begin at 9 a.m.