Biden: Shots for all adults in May 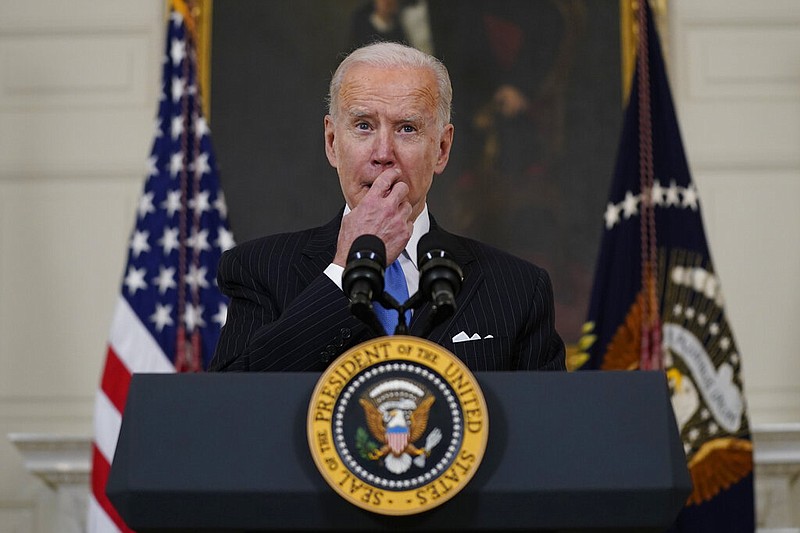 WASHINGTON -- President Joe Biden announced Tuesday that there would be enough doses of the coronavirus vaccine available for the entire adult population in the United States by the end of May, although he said it would take longer to actually inoculate everyone, and he urged people to remain vigilant by wearing masks.

Biden also said Tuesday that he would use federal authority to offer coronavirus vaccinations to K-12 teachers and child-care workers, with the aim of getting at least the first shot administered to all educators by the end of March.

[Video not showing up above? Click here to watch » https://www.youtube.com/watch?v=lgT6UKn4GyM]

Biden had previously said there would be enough doses for the adult population by the end of July. On Tuesday, he said the faster production of the vaccine was in part the result of an agreement by pharmaceutical giant Merck & Co. to help manufacture the new Johnson & Johnson coronavirus vaccine under an unusual deal brokered by the White House.

He said that agreement, along with other efforts by the government to help Johnson & Johnson produce more doses quickly, would substantially increase the supply of the new vaccine and ramp up the pace of vaccination just as worrisome new variants of the virus have been found in the United States.

"As a consequence of the stepped up process that I ordered, and just outlined, this country will have enough vaccine supply as a target for every adult in America by the end of May," Biden said. "By the end of May. That's progress. Important progress."

The arrangement, first reported by The Washington Post, comes just days after the Food and Drug Administration granted emergency authorization to the Johnson & Johnson vaccine.

Merck is an experienced vaccine manufacturer whose own attempt at making a coronavirus vaccine was unsuccessful. Biden described the partnership between the two competitors as "historic" and said it harks back to his vision of a wartime effort to fight the coronavirus.

"This is a type of collaboration between companies we saw in World War II," the president said.

Both Trump and Biden administration officials had explored enlisting Merck's help in manufacturing vaccines developed by either Pfizer or Johnson & Johnson. But Jen Psaki, White House press secretary, said the White House deserved credit for bringing the deal to fruition.

"There's a difference between conversations and it moving forward," she said. "I'm only conveying what got it across the finish line."

Just how quickly Merck will be able to ramp up is unclear. It will take months for the company to convert its facilities to manufacture and package a vaccine that it did not invent, according to two people familiar with Johnson & Johnson's operations who were not authorized to speak publicly. But one federal official with knowledge of the arrangement, who spoke on the condition of anonymity, said the administration hoped the deal would eventually double the doses that Johnson & Johnson could have manufactured on its own.

Although company executives have promised that the firm will catch up this spring, Johnson & Johnson has been running behind on its manufacturing targets as it tries to ramp up at its new plant in Baltimore. Its initial shipments of doses, delivered this week to states, were manufactured at its plant in the Netherlands.

Under the new agreement, Merck will dedicate two of its facilities to production of the Johnson & Johnson vaccine.

One facility will provide "fill-finish," the final phase of the manufacturing process during which the vaccine is placed in vials and packaged for shipping. The other will make the "drug substance" -- the vaccine itself.

Psaki said that the federal government would invoke the Defense Production Act to help Merck obtain necessary supplies and equipment, and had also asked the Defense Department to strengthen Johnson & Johnson's manufacturing effort.

The Johnson & Johnson vaccine is the third to receive emergency authorization from the Food and Drug Administration -- after Moderna and Pfizer-BioNTech.

The pace of the nation's vaccination effort has been steadily accelerating. As of Monday, about 50.7 million people had received at least one dose of a covid-19 vaccine, including about 25.5 million people who had been fully vaccinated, according to Centers for Disease Control and Prevention.

This week, states will receive 3.9 million doses that were manufactured at a Dutch plant and bottled in Grand Rapids, Mich. Johnson & Johnson is expected to mass produce the vaccine at a new Baltimore plant operated by a company called Emergent BioSolutions. Catalent, a different firm, will bottle the doses.

The FDA's authorization for emergency use, granted late Saturday, covered the Dutch production lines and the Grand Rapids bottling operation. In about two weeks, federal regulators are expected to decide whether to amend that authorization to include the other plants, according to the two people familiar with Johnson and Johnson's operations. Until then, they said, supply will be uneven and limited.

Even with Merck, the two people familiar with Johnson & Johnson's operations said, retooling plants to produce the vaccine will be a laborious, monthslong process. By the time it is accomplished, demand for shots may have waned.

Meanwhile, Biden's plan to offer the vaccine to educators aims to remove one of the major barriers to reopening schools.

Teachers, who have resisted going back in many communities, have said they would be much more willing to return to school buildings if they are vaccinated first.

More than half the states have already put teachers into a high-priority bucket in their vaccination programs.

"Today I'm using the full authority of the federal government, I'm directing every state to do the same," Biden said Tuesday. "My challenge to all states, territories and the District of Columbia is this: We want every educator, school staff member, child-care worker to receive at least one shot by the end of the month of March."

He said that starting next week, the federal government will use its pharmacy program to prioritize educators for vaccines and allow them to sign up for appointments.

"I want to be very clear," he added. "Not every educator will be able to get their appointment in the first week. But our goal is to do everything we can to help every educator receive a shot this month."

The status of K-12 education varies widely across the country, with some children able to attend in-person classes five days a week since the fall and others learning at home for nearly a year. Overall, the recent trend is toward more in-person options, with several large districts beginning to open buildings this week.

The White House also appears set to announce the appointment of someone to lead the effort to reopen schools. Linda Darling-Hammond, president of the California State Board of Education who ran the education team for the Biden transition, appears to be under consideration for the job, according to officials with the American Federation of Teachers. An administration official declined to confirm that Darling-Hammond was the pick but said the idea of appointing a leader was under "strong consideration."

"Vaccinations are a key ingredient to reopening schools safely, and this is the administration taking the steps to ramp up vaccinations for educators, which is great news for everyone who wants in-school learning," she said.

During the presidential transition period, the Biden team considered a special program to prioritize teachers, but it was dissuaded by the urgency of vaccinating older people, who are most likely to get very sick and require hospitalization, according to one person familiar with the conversations.

The CDC has recommended that teachers be prioritized, suggesting that they be part of the second group eligible for the vaccine, behind health care workers and people in nursing homes and other senior settings.

But the CDC did not mandate it, and in its guidance for school districts said teacher vaccination is not a prerequisite for schools to reopen.

Now the White House is bypassing state decision-making and giving teachers direct access to vaccine supply under its control through its pharmacy program.

The Biden administration began deploying vaccines directly to retail pharmacies Feb. 11, starting with 1 million doses. That sum quickly doubled, and it has grown steadily since.

White House officials told governors Tuesday that the next wave of shipments to pharmacies would include 2.4 million doses. The initial locations, which included 6,500 stores, were selected in part to serve communities disproportionately affected by the virus, the administration said.

Until now, access to this program was governed by eligibility rules in each state, though the Biden administration said locations were chosen to prioritize hard-hit communities.

Biden's announcement included child-care workers, who have received far less attention than teachers have. Many of them have been working in-person through much of the pandemic.

Information for this article was contributed by Sheryl Gay Stolberg and Sharon LaFraniere of The New York Times; and by Laura Meckler, Isaac Stanley-Becker and Ashley Parker of The Washington Post.