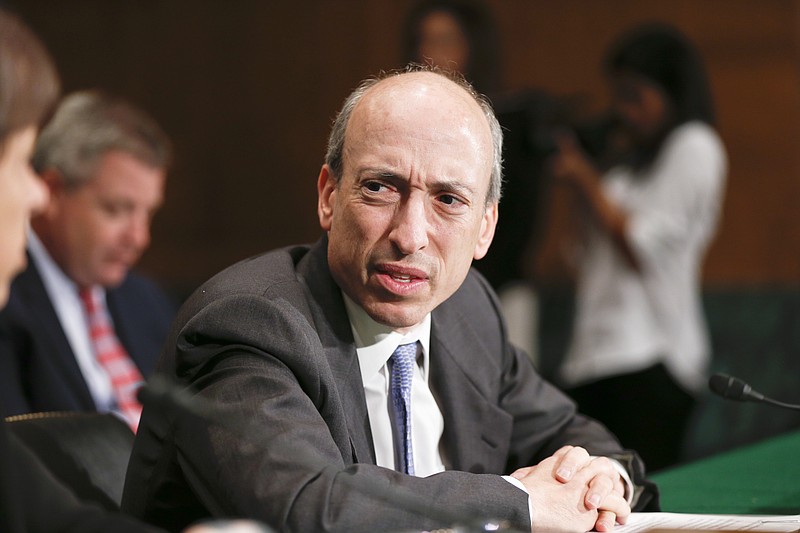 FILE - In this July 30, 2013, file photo, Gary Gensler testifies on Capitol Hill in Washington.President Joe Biden’s choice to head the Securities and Exchange Commission is coming before a Senate panel for his confirmation hearing, at a moment when a roiling stock-trading drama has spurred clamor for tighter regulation of Wall Street. Gensler, a chairman of the Commodity Futures Trading Commission during the Obama era, has experience as a tough markets regulator during the financial crisis (AP Photo/J. Scott Applewhite, File)

Two nominees for President Joe Biden's team of Wall Street regulators appeared before the Senate Banking Committee for a joint hearing on their nominations Tuesday.

Gary Gensler, tapped to head the Securities and Exchange Commission, and Rohit Chopra, in line to lead the Consumer Financial Protection Bureau -- are expected to take a tough line against the financial services interests they would oversee.

Their aggressive approaches likely will draw some pushback from Republicans. But both have won Senate confirmation by wide margins for other regulatory posts -- Gensler in 2009 as chairman of the Commodity Futures Trading Commission, and Chopra in 2018 for a seat on the Federal Trade Commission.

Gensler, testifying by video, was asked about the roiling stock-trading drama involving GameStop shares that has spurred clamor for tighter regulation of Wall Street. The trading frenzy in shares of the struggling video-game retailer lifted their price 1,600% in January, though they later fell back to earth after days of wild price swings.

"At the core it's about protecting investors," Gensler said. Among the issues to be examined, he said, is the use of "behavioral" technology in stock-trading apps.

"What does it mean when you have behavioral prompts to get investors to do more transactions? We're going to have to study that and think about it," Gensler told the panel.

The GameStop episode prompted lawmakers to raise concern about the business model of Robinhood, the online trading platform that hosted a wave of trading in GameStop. Critics have accused Robinhood of trying to lure people with little or no experience trading stocks by including features on its trading platform that resemble gaming apps -- like showering users' screens with virtual confetti when they make a trade. Lawmakers have asked whether Robinhood is doing enough to communicate the risks to its estimated 13 million users.

If confirmed to the SEC post, Gensler said, he would work to strengthen transparency and accountability in the markets. That will enable people "to invest with confidence and be protected from fraud and manipulation," he said.

Gensler has shown receptiveness to new financial technologies and cryptocurrency. As a professor at Massachusetts Institute of Technology's Sloan School of Management, he has focused research and teaching on public policy as well as digital currencies and blockchain, the global running ledgers of digital currency transactions.

With a background of having worked for nearly 20 years at Goldman Sachs, the Wall Street powerhouse investment bank, Gensler surprised many by being a tough regulator of big banks as head of the Commodity Futures Trading Commission chairman during the 2008-09 financial crisis. He imposed oversight on the $400 trillion worldwide market for the complex financial instruments that helped spark the 2008-09 crisis. Gensler pushed for stricter regulations that big banks and financial firms had lobbied against, and he wasn't afraid to take positions that clashed with the Obama administration.

Biden's nominee to run the federal consumer watchdog agency indicated Tuesday that if confirmed he would restore more aggressive enforcement actions against companies and banks that largely faded during the Trump administration.

Chopra, currently a Democratic commissioner on the Federal Trade Commission, would be the third permanent director of the decade-old Consumer Financial Protection Bureau, which was created in the aftermath of the 2008 financial crisis.

Republicans have been critical of the bureau from the onset, arguing that its structure grants too much power to one person, its director. The bureau is also not subject to the annual congressional budget process, instead receiving all its funds from the Federal Reserve.

Chopra said in his Senate confirmation hearing Tuesday that he plans to "work with [senators] to build a new bipartisan consensus" for the bureau.

But he also signaled he wants to return the agency to its former self. During the Trump administration, the bureau drastically scaled back its enforcement actions, both in number and size, and it relegated concerns, such as fair lending, to a much smaller position inside the bureau.

Chopra said, if confirmed, he would likely return the bureau to aggressively fine and penalize companies for bad behaviors.

"Economically it does not make sense that you rip someone off and don't have to pay a penalty for it," Chopra told senators. "Restitution is a critical part of the CFPB's work."

A former consultant at McKinsey & Co. before the financial crisis, Chopra is a veteran of the bureau, working there in its early days as the bureau's top official on student loan issues. He is considered a staunch ally of Sen. Elizabeth Warren, D-Mass., who proposed the idea for the bureau long before the 2008-2009 recession. He is also well liked by the consumer advocacy groups that often oppose banks in regulatory matters.

Information for this article was contributed by Marcy Gordon and Ken Sweet of The Associated Press and by Tory Newmyer of The Washington Post.