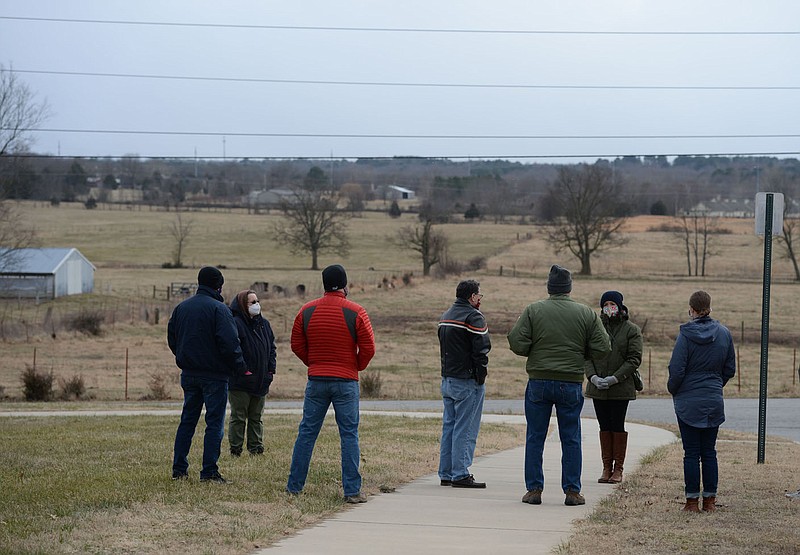 Architect Alli Quinlan (second from right) leads a tour Jan. 15, 2021, of land considered for annexation and rezoning for Fayetteville city staff and City Council members east of Crossover Road and the Botanical Garden of the Ozarks in Fayetteville. The City Council accepted the land for annexation Tuesday but held off on an associated plan for development for the site. (File photo/NWA Democrat-Gazette/Andy Shupe)

FAYETTEVILLE -- The city gained 59 acres into its regulatory authority Tuesday, but an associated plan to develop the land was held.

Two items associated with the proposed Chandler Crossing subdivision east of Zion and Crossover roads came before the City Council. The first item was to annex 59 acres of farm land in Washington County into the city. The second item was a planned zoning district to develop the entire property, including an additional 23 acres already in city.

The council held off on a vote over the planned zoning district outlining development for the project. It will be back on the council's March 16 agenda.

The Chandler Crossing plan includes 370 residential lots south of Zion Road and Hilton Creek, which runs through the property and feeds Lake Fayetteville. It also includes a commercial area on about 6 acres on the east side of Crossover Road. A third piece includes 36 acres of open space, including the area nearest to the creek.

Annexing the land subjects it to more development regulations compared to the county, Development Services Director Jonathan Curth said. The county has stormwater standards, and being within a mile of the city, the land also would be subject to the city's subdivision standards, he said.

With the annexation, the land will become subject to those two regulations, plus the city's regulations on tree preservation, landscaping, water quality, building and energy codes, exterior lighting and streamside protection, Curth said.

Seven people from the public spoke on the annexation, some who live on the county side and some from within the city.

Joseph Robertson, from the county side, said the annexation map encircles a dozen homes in the county and excludes a one-way bridge on Zion in bad repair. Leaving the area out of the city means keeping maintenance and responsibility out of the city's jurisdiction, he said.

"I would ask that you would deny this particular annex so that they would go back and rework it and make it to include everything that should be in the city," he said.

One resident shared two videos of severe flooding in the area, which council members were able to see via the online format on Zoom. A number of residents expressed skepticism the annexation would help the flooding issues, considering the floodprone areas included parts in the city.

Council Member Sloan Scroggin, one of the representatives of that part of town, said it appeared improperly constructed detention ponds away from the property were contributing to the flooding and needed to be addressed. Regardless, putting the Chandler Crossing property in the city's jurisdiction will serve residents better than letting it stay in the county, he said.

"I think some people think we're voting between no development and this development," Scroggin said. "Something's going to get built here, and hopefully we use our design standards and we actually give this PZD a good look."

Turk said it appeared the most valuable part of the land -- the commercial piece next to Crossover Road -- is already in the city. The city should do what it can to fix the existing flooding problems before doing anything else in the area, she said, and she worried about the potential impact to existing wetlands and prairie mounds at the site.

Turk also introduced a measure to kick off an effort to improve the water quality at Lake Fayetteville, restoring it to a more natural state and making it swimmable. Discussion went past 9:30 p.m.

Fayetteville’s City Council held off on a decision to approve a contract dealing with land for a new parking deck downtown. The deck would be northwest of Dickson Street and West Avenue and would replace the 290 spaces lost once the parking lot west of the Walton Arts Center becomes the civic green space of the planned cultural arts corridor.

The deal involves property owners Ted Belden, Greg House and Farmers & Merchants Bank, which operates the train bank. Mayor Lioneld Jordan said the bank’s board will meet March 9 to consider signing the contract. The item will come back to the council March 16.