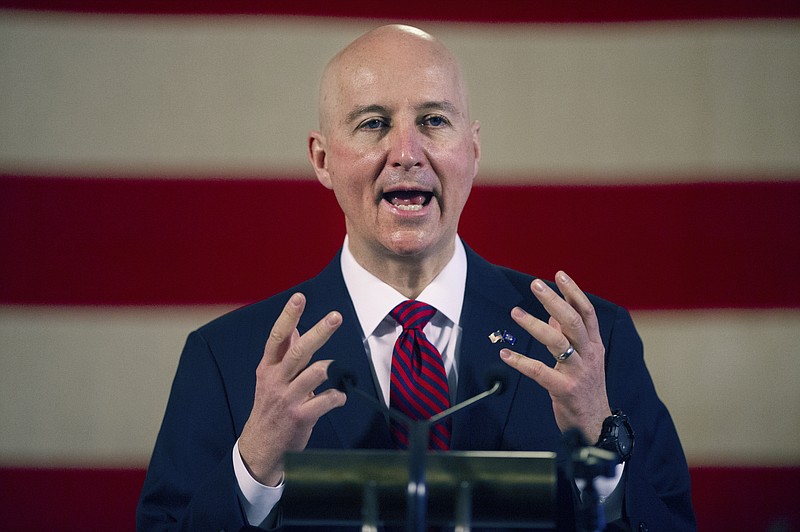 FILE - In this Feb. 26, 2021 file photo, Nebraska Governor Pete Ricketts speaks during a news conference at the Nebraska State Capitol in Lincoln, Neb. The Biden administration's plan to funnel more coronavirus aid into states with greater unemployment has irked governors with lower jobless rates, even though many have economies that weren't hit as hard by the pandemic. "You're penalizing people who have done the right thing," said Gov. Ricketts, a Republican whose state has reported the nation's lowest unemployment rate over the last several months. (Kenneth Ferriera/Lincoln Journal Star via AP)

LINCOLN, Neb. -- The Biden administration's plan to funnel more coronavirus aid into states with greater unemployment has irked governors with lower jobless rates, even though many have economies that weren't hit as hard by the pandemic.

The $1.9 trillion relief bill working its way through Congress allocates extra money to larger, mostly Democratic-run states with higher unemployment rates, while rural Midwestern and Southern states that tend to have Republican governors and better jobless numbers would benefit less.

"You're penalizing people who have done the right thing," said Nebraska Gov. Pete Ricketts, a Republican whose state has reported the nation's lowest unemployment rate over the past several months. "That's not the way you want to approach any sort of government program."

Ricketts was one of 22 governors -- 21 Republicans and one Democrat -- who have criticized the change in the pandemic relief proposal. Under previous coronavirus packages signed by former President Donald Trump, aid was distributed by population. If the new funding formula is approved, states including California, New York and New Jersey would each see a boost of more than $2 billion, while Iowa, Missouri, Nebraska and Ohio would all see aid reductions greater than $500 million. Georgia and Florida would see losses of more than $1.2 billion.

Many of the Republican-led states have taken a more hands-off approach to the pandemic to try to keep businesses open, while Democratic states argued that tighter mandates were necessary to save lives and help their economies over the long term.

The White House defended President Joe Biden's distribution plan, saying it targets money to areas where it will have the biggest impact.

"President Biden's rescue plan is focused on quickly getting help to the people and communities that need it most," said Michael Gwin, director of White House rapid response.

Iowa State University economist David Swenson said the White House's approach makes some sense because the states with the highest unemployment rates are generally the ones that relied more on industries battered by the pandemic, such as tourism.

"If proportionally more people are unemployed in Las Vegas and California and other places that are entertainment destinations, then it would make sense to send money to those places instead of Iowa and Nebraska," Swenson said.

Critics argued that many of the hardest-hit states had higher jobless rates even before the pandemic began.

"Some states just have naturally lower unemployment rates," said Ernie Goss, an economist at Creighton University in Omaha. "That's one of the problems with doing it that way."

Goss said it might make more sense to distribute aid to states that saw the biggest increases in unemployment during the pandemic. But he cautioned that the unemployment rate is still an incomplete measure of any state's economy, because it doesn't count people who have stopped looking for work.

Ohio Republican Lt. Gov. Jon Husted said his state's jobless rate is likely unreliable because of unemployment fraud. He said Ohio has made multiple efforts to return people to work safely, but the new funding formula would cost his state about $800 million in federal aid.

Iowa Gov. Kim Reynolds, a Republican, said the funding formula "punishes states that took a measured approach to the pandemic and entered the crisis with healthy state budgets and strong economies."

Arkansas Gov. Asa Hutchinson, a Republican who vice chairs the National Governors Association, last month raised concerns about using unemployment when he and other governors met with Biden.

"That's really a disincentive for economic growth and people working," Hutchinson said after the meeting.

On Tuesday, Senate Majority Leader Charles Schumer, D-N.Y., said the Senate will move forward as soon as today on the coronavirus relief bill and pledged, "We'll have the votes we need to pass the bill."

Schumer's comments at a news conference Tuesday came even as moderate Senate Democrats maneuvered to limit some of the expenditures in the bill, over objections from liberals who insisted they'd already made concessions on Biden's first major legislative proposal.

Biden urged Senate Democrats on a private lunchtime call Tuesday to stay united behind the bill, arguing it's broadly popular with the public and controversial only on Capitol Hill, according to two Democrats who spoke on condition of anonymity to recount the private comments.

Meanwhile, Senate Minority Leader Mitch McConnell, R-Ky., said he hoped that "in the end Senate Republicans will unanimously oppose it, just like House Republicans did" when the legislation passed the House on Saturday with no GOP votes.

"This is a wildly expensive proposal largely unrelated to the problem," McConnell said. "We think this package should have been negotiated on a bipartisan basis... . Instead the new administration made a conscious decision to jam us."

Senate Democrats are pushing the sprawling legislation forward under a process called "budget reconciliation" that allows it to pass with a simple majority, instead of the 60 votes required for most major legislation. With the Senate split 50-50 between Democrats and Republicans, that means Democrats can succeed only if they stay united and Vice President Kamala Harris breaks the tie.

Democrats and the Biden administration want to complete the legislation ahead of a March 14 deadline when emergency unemployment benefits will expire for millions of Americans unless Congress acts to extend them.

If the Senate takes an initial procedural vote to open debate on the bill on Wednesday, final passage could come at the end of the week after a lengthy amendment process. The legislation would then likely need to go back to the House for final passage.

Amendments are expected from all sides, with Sen. Bernie Sanders, I-Vt., pledging a vote to restore a $15 minimum wage that the Senate parliamentarian ruled was not allowed in the bill under the rules of budget reconciliation.

Republicans are teeing up amendments aimed at dividing Democrats. And moderate Senate Democrats are eyeing changes of their own that, if adopted, could create problems for the bill among liberals in the House.

Biden took to Twitter to signal he wouldn't budge from his demand that lawmakers add a fresh $1,400 payment to the $600 that millions of individuals received from a December relief measure. That new installment comprises nearly a quarter of the overall bill's cost.

"The fact is that $600 is not enough. The Senate needs to pass the American Rescue Plan and finish the job of delivering $2,000 in direct relief," Biden wrote.

Biden's bill would also increase the existing $300 weekly federal unemployment benefit to $400 per week and extend it through August. But a handful of moderate Democrats want to keep the benefit at $300 per week, while others -- such as Finance Chairman Ron Wyden, D-Ore. -- hope to extend it through September instead of August. Discussions were ongoing about both the timing and the level of the benefit.

"I've been at $300 ... it's kind of hard to explain you're getting a bump-up now," said Sen. Joe Manchin, D-W.Va., suggesting the higher $400 figure would reduce incentives for people to rejoin the workforce just as increasing vaccinations are poised to help the economy reopen.

"We want people to get back to work," Manchin said. "It'd be awful for the doors to open up and there's no one working, you got a lot of customers, no one working. That's the problem."

Manchin's proposal was running into opposition from liberals in both chambers.

"It's going to be a challenge for progressives if the package gets watered down," Jayapal said.

Asked if Democrats are open to "targeting" certain aspects of the bill as moderates are proposing, Schumer said: "We want to get the biggest, strongest, boldest bill that can pass. And that's what we're working to do."

Biden did not take questions from senators when he called into their weekly lunch Tuesday, instead using the opportunity to make the case for them to unite and pass his bill.

"This is real important that Democrats stick together, and let's get this done for the American public," Kaine said, summarizing the president's message. "The public really needs it. This plan is composed of the right elements. It's popular. Republicans like it. Republican mayors and governors like it. The bill will be chock full of things that Republicans have asked for. So, you know, let's do it."