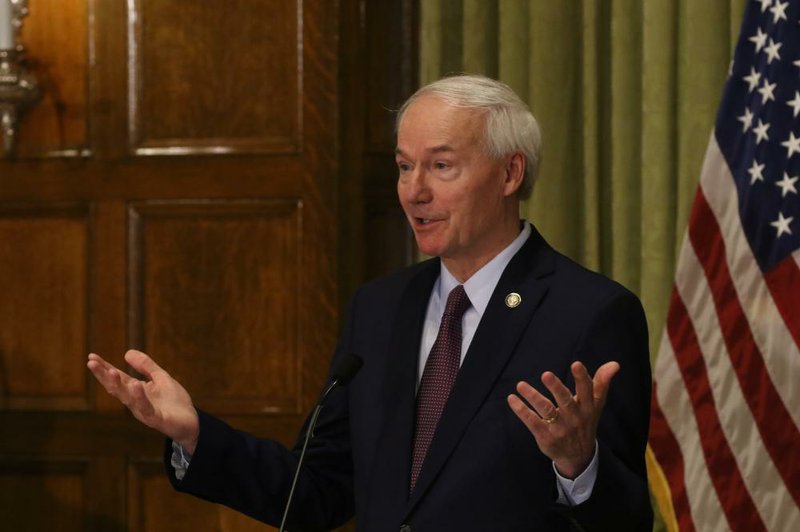 Arkansas Gov. Asa Hutchinson on Tuesday extended eligibility for the coronavirus vaccines to workers at poultry plants and other food manufacturing sites -- expanding the population of those now allowed to receive the shots by about 49,000 people.

The Republican governor also said the more-transmissible variant of the virus discovered in the United Kingdom had been identified for the first time in Arkansas.

[Video not showing up above? Click here to watch » https://www.youtube.com/watch?v=zT3lTsvtnWs]

Health Secretary Jose Romero said he learned of a test result confirming the variant case Monday. He declined to provide other details, such as what part of the state the person lives in, citing health privacy concerns.

Hutchinson also said an increase in production will lead Arkansas' weekly allotment of the Moderna vaccine and the one from Pfizer and BioNTech to increase by enough to provide initial shots next week to 2,500 to 3,000 more people compared with what the state was allocated for this week.

That would bring the state's total allocation of initial doses of those vaccines to more than 65,000.

The state is also expected to receive 24,400 doses this week of the one-shot Johnson & Johnson vaccine that was cleared for emergency use by the U.S. Food and Drug Administration on Saturday.

The announcements came as the state's count of coronavirus cases rose by 440, the second daily increase in a row that was smaller than the one a week earlier.

The state's death toll from the virus, as tracked by the state Department of Health, rose by four, to 5,254.

At his weekly news conference on the pandemic, Hutchinson cited the number of cases and deaths among workers in the food processing industry as reasons for making them the latest group to become eligible for the vaccine.

Like employees of schools and child care centers and people age 65 and older, they fall under the state vaccination plan's Phase 1-B that began in January.

Several other types of "essential priority workers," including grocery store employees, postal workers and workers at other types of factories, are also listed under Phase 1-B but are not yet eligible for the shots.

Health care workers, first responders, and residents and workers at long-term-care facilities fall under Phase 1-A of the effort, which began in December.

"We look back on the history of our cases and where we had early spikes in cases, breakouts, as well as deaths, and we had a real jeopardy with those that were in the food processing industry," Hutchinson said.

He added that employees of the plants work "close in proximity to each other."

"They're obviously an essential worker, but in addition, they're an exposed worker because of that, and we wanted to move them in," Hutchinson said.

The Food and Environment Reporting Network, an investigative reporting nonprofit organization, is keeping a count of worker infections during the pandemic and, as of Tuesday, reported that the virus had infected at least 57,512 meatpacking workers and killed 284.

Data show that there were 52 outbreaks in Arkansas meatpacking plants, with 6,792 cases and 22 deaths.

Hutchinson said companies will be arranging clinics for their employees. The workers can also get the shots at pharmacies and other locations, he said.

Health Department spokesman Gavin Lesnick said workers can use their company badge or letterhead at pharmacies to confirm their eligibility.

Springdale-based Tyson Foods, the nation's largest meat-producing company, has encouraged all of its workers to get the vaccine and is working with medical partners and state health officials to offer vaccinations at its plants.

The company plans to begin administering the shots to thousands of its processing workers, including those in Arkansas, as vaccine supplies are made available.

"We're proud to soon offer our team members convenient access to the vaccine, and we appreciate the state of Arkansas recognizing the essential role they play in feeding the world," Tyson spokesman Derek Burleson wrote in an email Tuesday.

In preparation for the state's approval, Tyson surveyed workers at several locations to see who would be interested in the vaccine. Of the 1,102 workers at Tyson's Berry Street plant in Springdale, Burleson said more than 80% of them signaled that they want a vaccination.

The company said Monday that it would vaccinate thousands of its plant workers in Iowa, where about 13,000 are employed by Tyson, and offer doses in Kentucky, Missouri and North Carolina.

It has also agreed to compensate workers for up to four hours of regular pay if they are vaccinated outside of their normal shifts by an outside clinic or medical provider.

Simmons Foods, a poultry and pet foods manufacturer based in Siloam Springs, has been encouraging workers to get vaccinated and is expecting the distribution of vaccine to its company care clinics soon.

"We look forward to doing our part," Simmons spokesman Lainie Button wrote in an email Tuesday.

Meatpackers began giving vaccinations to workers as states approved and allocated supplies for them. Over the weekend, JBS, owner of Pilgrim's Pride, said it will vaccinate 8,500 workers at locations in eight states.

To curb the spread of the virus, some of the largest food companies invested hundreds of millions in worker health and safety measures, as well as bonus incentives for workers with good attendance during the pandemic.

Industry giants such as Tyson, JBS and Smithfield have all faced lawsuits related to the coronavirus.

In response to Hutchinson's announcement, organizers of a vaccination clinic planned for Saturday at Arkansas State University's First National Bank Arena in Jonesboro said they had added food manufacturing workers to the categories of people who will be able to receive shots at the event.

Shane Speights, dean of the New York Institute of Technology College of Osteopathic Medicine at ASU, said last week that organizers are hoping to give initial shots to about 3,500 people.

Hutchinson said the state appeared to be on track to vaccinating at least 70% of the people in Phase 1-B by sometime in April, when he hopes to move to Phase 1-C, if not before.

He said about half of Arkansans age 70 and older had received at least one dose of vaccine as of Tuesday, and almost a quarter had been fully vaccinated.

"I think it shows some resistance to the vaccine that we need to overcome," he said.

To make the vaccines more available in rural areas, Hutchinson said the Health Department this week will start holding vaccination clinics through its local health units in each of its five public health regions in the state.

The clinics will target counties with low vaccination rates, he said.

Starting next week, Hutchinson said the state plans to have a toll-free number that people will be able to call to find out where the clinics will be held.

More information about the clinics will be posted on the Health Department's website, healthy.arkansas.gov, he said.

Lesnick said 37,818 Arkansans age 65-69, who became eligible for the shots last week, had received at least one vaccine dose and 13,108 had received two doses.

Phase 1-C of the state's vaccine plan includes other types of essential workers, such as those working in food service, construction and finance, as well as people age 16-64 with medical conditions putting them at greater risk of severe complications from covid-19.

News of Arkansas' first case of the United Kingdom coronavirus variant came just a few days after Hutchinson lifted almost all of the Health Department's directives aimed at slowing the spread of covid-19.

Hutchinson said Friday that the state's mask mandate will remain in place until at least the end of March, after which it will be lifted if certain targets are met.

He said Tuesday that knowing that the variant was in Arkansas wouldn't have changed his decision to lift the directives because he "presumed it was here at the time."

"So while the variant's presence is always a factor that should be considered, the most important factor to me is the level of community spread, the number of cases, but also the hospitalizations, and we have set very specific criteria that we would have to meet before the mask mandate would become a guideline," Hutchinson said.

Hutchinson said Friday that the mandate will be lifted if less than 10% of the state's coronavirus tests are positive over a rolling seven-day period and at least 7,500 tests are being conducted each day.

If fewer than 7,500 tests are being conducted a day, the mandate will be lifted if fewer than 750 patients with covid-19 are in hospitals.

The Health Department reported Tuesday that just 5.8% of the polymerase chain reaction, or PCR, and antigen tests of Arkansans were positive in the seven-day span ending Monday, down from a peak of 18.9% during the week that ended Jan. 2.

Romero said the presence of the variant "simply reminds us that we need to use the mask, regardless of whether it's a mandated issue or not."

He said it also reinforces the need for people to take the vaccines, which he said are effective against the variant.

The U.S. Centers for Disease Control and Prevention's website listed 44 states besides Arkansas where the variant had been identified as of Tuesday.

The site, which was updated Tuesday, had not yet added Arkansas to the list.

According to the Health Department, the total number of vaccine doses delivered or allocated to Arkansas or providers in the state participating in federal programs topped 1 million Tuesday.

Pharmacies, hospitals and other providers participating in the effort coordinated by the state had received 975,910 doses, up by 73,890 from the total as of a day earlier.

In addition, Walmart, Walgreens, CVS and pharmacies belonging to the Community Pharmacy Enhanced Services Network had been allotted a total of 91,070 doses through federal programs, an increase of 3,510 from a day earlier.

The doses those providers reported having administered rose by 955, to 43,647.

According to the CDC, 431,866 Arkansans, or 14.3% of the state's population, had received at least one vaccine dose as of Tuesday.

Nationally, 15.6% of people had received at least one vaccine dose and 7.9% had received two doses, according to the CDC.

Within Arkansas, the percentage of residents age 16 and older who had received at least one vaccine dose ranged from 21% in Woodruff County to 4.2% in Miller County.

Tuesday was the fifth day in a row when the number of coronavirus patients in the state's hospitals was lower than the day before.

The number of the state's virus patients who were on ventilators also fell for the fifth straight day, going from 84 Monday to 80.

The cases that were added to the state's tallies included 225 that were confirmed through PCR tests.

The other 215 were "probable" cases, which include those identified through antigen tests.

The number of cases that were considered active rose by 12, to 4,254, as 424 Arkansans were newly classified as having recovered.

Among prison and jail inmates, the Health Department's count of cases rose by three.

The state's death toll grew by eight, to 4,265, among confirmed cases and fell by four, to 989, among probable cases.

Deaths among probable cases can be reclassified as being among confirmed cases after the results of PCR tests come in, Health Department officials have said.

Among nursing home and assisted living facility residents, the state's count of virus deaths grew by six, to 1,987.

The number of people who have ever been hospitalized in the state with the virus grew by 31, to 14,795.

The number of the state's virus patients who have ever been on a ventilator with the virus rose by three, to 1,519.