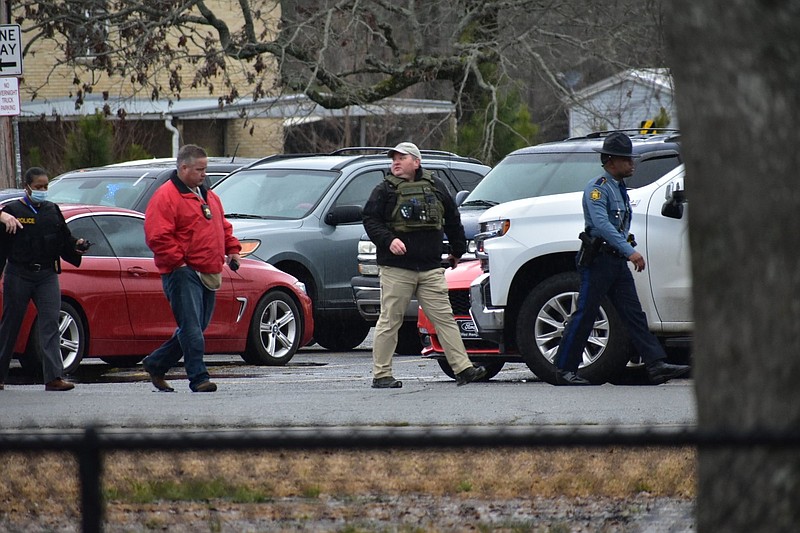 Watson Chapel Junior High School in Pine Bluff will conduct classes virtually for the second day in a row today in the aftermath of the campus shooting Monday that left a ninth-grade student seriously wounded.

Another student attending the school remains in custody under suspicion of carrying out the shooting. He was arrested Monday after the incident. The victim and the suspect are both 15, according to the Pine Bluff police chief.

The suspect, who has not been identified, is scheduled to appear before District Judge Kim Bridgforth this morning, according to Toni Perkins, information clerk and victim advocate with the Jefferson County prosecuting attorney's office.

In a phone interview Tuesday, Perkins noted that whether the suspect will be formally charged as an adult will be determined later, "after they have the entire case file on hand," she said. "But they will have that option because he is being seen in probable cause court."

During a news conference after Monday's shooting, Jefferson County Prosecuting Attorney Kyle Hunter said a decision on whether to have the suspect appear in juvenile or adult court for the probable cause hearing would be forthcoming.

When asked if having the suspect appear in district court today indicates that prosecutors will seek to charge the individual as an adult, Perkins said, "Well, that gives them the option."

"If they're seen in probable cause in an adult court, then he has both options," she said. "If they only [see] him in juvenile court, it would have to be actually transferred from juvenile to circuit court."

Jerry Guess, the superintendent of the Watson Chapel School District, said in a Tuesday phone interview that counselors were present at the junior high school Tuesday to work with the staff.

"There will be counselors on the campus all week long," Guess said. "We've got very generous offers from other school superintendents to send their counseling staffs."

Educators have been reporting to the school to teach virtually, but students will remain at home to receive virtual instruction. Students are expected to return for in-person instruction Thursday, according to Guess.

"[Monday] was a very traumatic day for the staff," Guess said. "And there were some staff members that needed some time to talk."

Students were told that they could go to the campus Tuesday if they chose to, Guess said, but he added, "I don't think many junior high kids came, if any."

Security personnel at the school consists of two armed individuals, both employees of the school district, according to Guess. One is a sworn officer who works under the auspices of the sheriff's office. Another security guard carries a weapon and "largely patrols the exterior of the buildings," Guess said.

Guess did not immediately respond when asked in an email after the interview if one or both of the security officials were present at Watson Chapel Junior High School on the morning of the shooting.

Pine Bluff Police Chief Kelvin Sergeant said Monday that a school resource officer was not present at the junior high school when the shooting occurred.

Sergeant said authorities believe the incident was "a targeted incident, as opposed to a random incident."

Watson Chapel Junior High School serves grades 7-9. The campus entered an active-shooter protocol when the shooting happened, according to the police chief. No other individuals were hurt in the shooting.

Students were released to their families beginning around 11 a.m. Monday after the incident.

The suspect was found hiding near a house in the neighborhood of the junior high school and was arrested by a dog team from the Arkansas Department of Corrections, Sergeant said.

On the morning of the shooting, the junior high school was resuming in-person classes after an extended period of virtual learning because of back-to-back snowstorms that hammered Arkansas last month and because of weather-related water utility problems affecting Pine Bluff.

The victim was taken Monday to Arkansas Children's Hospital in Little Rock for treatment, according to Sergeant.

A Pine Bluff police spokesman, Lt. David DeFoor, did not respond Tuesday when asked about the victim's status.