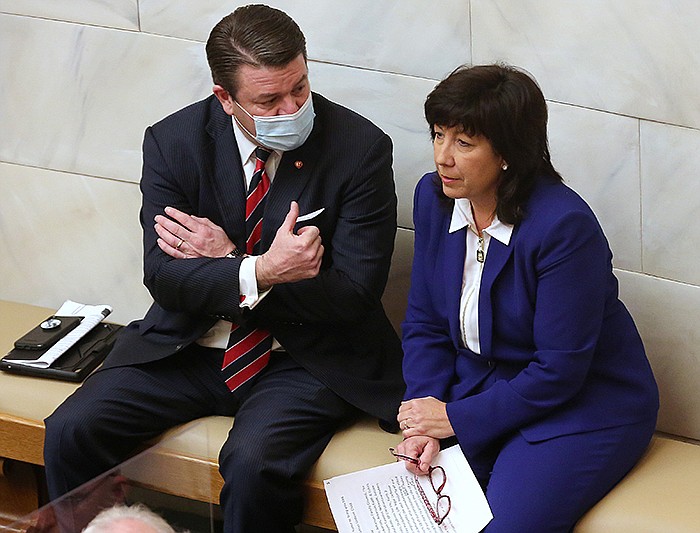 The Arkansas House of Representatives voted Wednesday to send a bill to Gov. Asa Hutchinson that would ban nearly all abortions in the state.

Hutchinson told reporters Wednesday that he had not yet made a decision on whether he would sign Senate Bill 6, which prohibits all abortions except those performed to protect the life and health of the mother. A spokeswoman later said that he would announce his decision next week.

The ban does not include exceptions for cases of rape and incest, provisions that Hutchinson, an anti-abortion Republican, has previously expressed support for.

The governor could sign the bill or allow it to become law without his signature. If he chooses to veto the bill, the Legislature could vote to override the veto with a simple majority in both chambers.

The House voted 76-19 in favor of the bill after overwhelming support from the Senate last month. Both chambers voted mostly along party lines.

"It is the will of the people of Arkansas to save the lives of unborn children and to help women in this state," said Rep. Mary Bentley, R-Perryville, the lead sponsor of SB6 in the House.

The House's decision was made after about 50 minutes of tense and at times emotional debate.

Proponents of Arkansas' bill and of anti-abortion measures in other states aim to trigger the U.S. Supreme Court to reconsider its long-standing precedent in Roe v. Wade, the 1973 ruling that found unconstitutional a Texas law that prohibited abortions except to save the life of the mother.

Mississippi has already asked the U.S. Supreme Court to review its law banning abortion after 15 weeks, and the South Carolina governor last month signed into law a bill prohibiting an abortion if a fetal heartbeat is detected, with few exceptions.

Rep. Ashley Hudson, D-Little Rock, said the lawmakers behind SB6 are misleading constituents, as there's no guarantee the U.S. Supreme Court would add Arkansas' bill to their docket, and the addition of Justice Amy Coney Barrett last year doesn't mean the state would be successful in defending the bill because Barrett has expressed support for legal abortion in cases of rape and incest.

"That is not defending life. That is the opposite, because what we are doing now is gambling with our constituents' lives, telling them something that we know is not true," Hudson said.

State law currently allows abortions up until the 20th week of pregnancy.

Under SB6, a doctor convicted of performing an illegal abortion could face up to 10 years in prison. Women who receive abortions would not be subject to criminal penalties.

Democratic lawmakers who spoke against SB6 on Wednesday noted that the bill does not make exceptions for severe fetal anomalies that mean the baby will not survive at birth.

Rep. Julie Mayberry, R-Hensley, spoke in support of the bill by detailing her own experience raising a daughter with spina bifida, a spinal condition that occurs early in a pregnancy.

"Legally, I could have aborted her, but before the doctor even got that information out there to just make sure that we knew, we stopped him, and the conversation ended there, and I'm so very grateful," Mayberry said. "I wouldn't change anything. She's made me a better person."

She also recounted the experience of a friend whose baby died shortly after birth but whose organs were donated, saving the lives of two other children.

Rep. Megan Godfrey, D-Springdale, recalled the difficult decisions of friends who chose to end pregnancies because the child would not live outside the womb.

"Those moms chose to lovingly terminate their pregnancies based on the intimate details of what was best for their babies, their families and their bodies," Godfrey said. "I cry every time a bill like this is brought before us that dismisses their pain and criminalizes their choice."

In response to Democratic lawmakers who objected to the bill not allowing abortion for children who become pregnant as a result of rape or incest, Rep. Cindy Crawford, R-Fort Smith, said the child being as young as 12 could fall under the exception for protecting the life of the mother. Hudson countered that the bill didn't say that explicitly.

The bill will face a legal challenge if it becomes law, the American Civil Liberties Union of Arkansas said in a statement Wednesday.

"This abortion ban is plainly unconstitutional and we stand ready to challenge it and any effort to block Arkansans from care or dictate their personal medical decisions. We will be seeing the state of Arkansas in court again," the organization said.

The bill has the support of traditional anti-abortion advocates, including Arkansas Right to Life, the Arkansas Family Council and the Catholic Diocese of Little Rock, though one Republican senator asked sponsor Sen. Jason Rapert, R-Conway, to pull back the bill and include exceptions for rape and incest. Rapert did not, and Sen. Missy Irvin, R-Mountain View, later voted for the bill.

An attorney for the National Right to Life Committee, which has not taken a position on the bill, said in a letter sent to Hutchinson in January that SB6 could backfire and set the anti-abortion movement back if the Supreme Court fails to overturn Roe v. Wade.

There were 2,963 abortions performed in Arkansas in 2019, according to the state Department of Health. 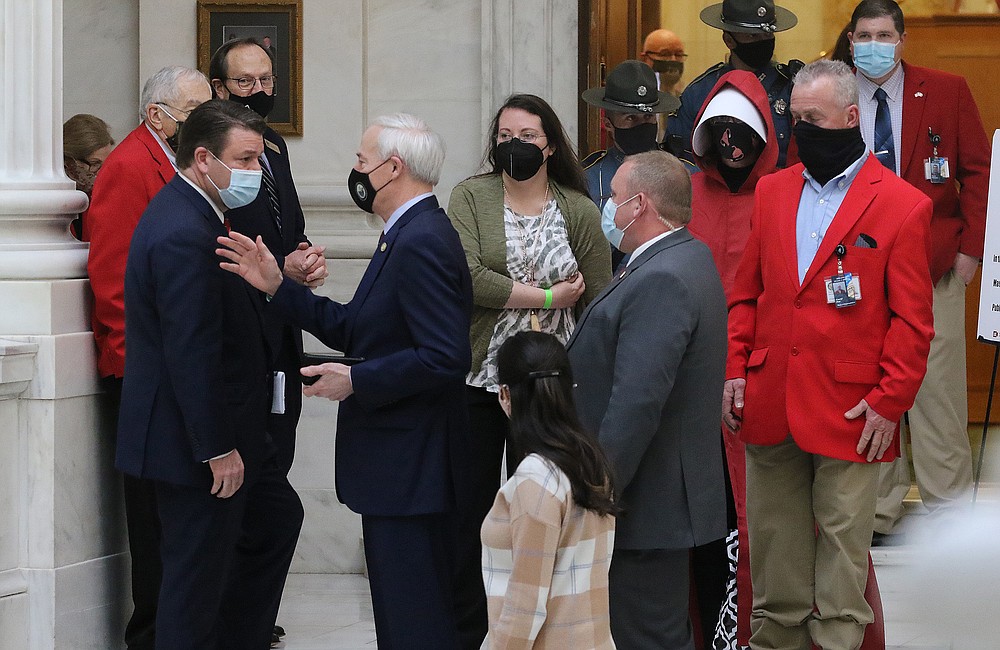 Sen. Jason Rapert (left), R-Conway, talks with Gov. Asa Hutchinson after passage of SB-6, a bill to abolish abortion in Arkansas, during the House session on Wednesday, March 3, 2021, at the state Capitol in Little Rock. .More photos at www.arkansasonline.com/34bill/.(Arkansas Democrat-Gazette/Thomas Metthe)