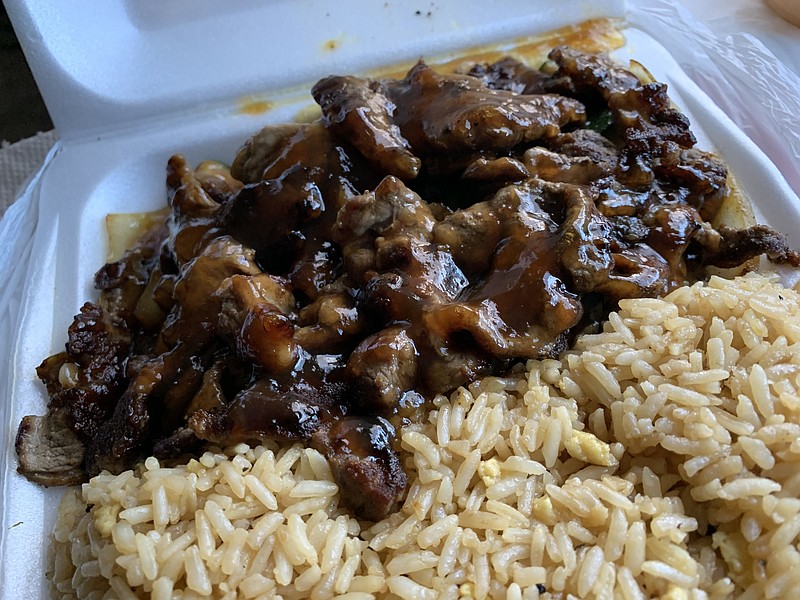 The Hibachi Yummy Beef to go from Bamboo Hibachi on Camp Robinson Road in North Little Rock was a bit more yummy than it was in the restaurant this time last year. (Arkansas Democrat-Gazette/Eric E. Harrison)

We ventured well into North Little Rock and west Little Rock for our takeout meals this week, feasting variously on beef, chicken, ham and seafood from restaurants and a food truck along the way.

As usual, we focused on locally owned operations, with a geographic radius that would — at least we hoped — get us home with hot dishes, and paid for all our food.

Our to-go experience at Bamboo Hibachi pretty much duplicated that for our dine-in review, one of the last we did before the pandemic, in March 2020. We noted then that the restaurant proclaims on Facebook that it "serves excellent quality Hibachi style food fresh made to order and quality Sushi at value pricing! and also generous portion," and that is true without hyperbole. And we noted at the time that Bamboo Hibachi packages everything to go, whether you're actually planning to take it out or eat it in the L-shaped dining room.

We were more thrilled this time around with our Hibachi Yummy Beef, because the chunks of beef were bigger, grilled crispier and better covered with a somewhat sweeter but still somewhat salty teriyaki sauce. The beef was served over the grilled vegetables — zucchini, onion, shredded carrot — which made it possible to get a bigger portion of beef than if the kitchen had tried to cram it in to the foam clamshell alongside, and we got so much fried rice that, though it was tasty, we had to abandon some of it.

Our six dumplings were once again crisp and enjoyable but without any dipping sauce, though we suppose we could have used the orange-y "yum yum" sauce that we presumed had come with the beef but we did not otherwise need.

HOW IT WENT: The dining room is open, so we dropped in and ordered and paid over the counter. Our food came out of the kitchen in the 10 minutes we were promised.

HOW IT'S GOING: There were at least six other customers, two in front of us, four behind us, most of them ordering to go. 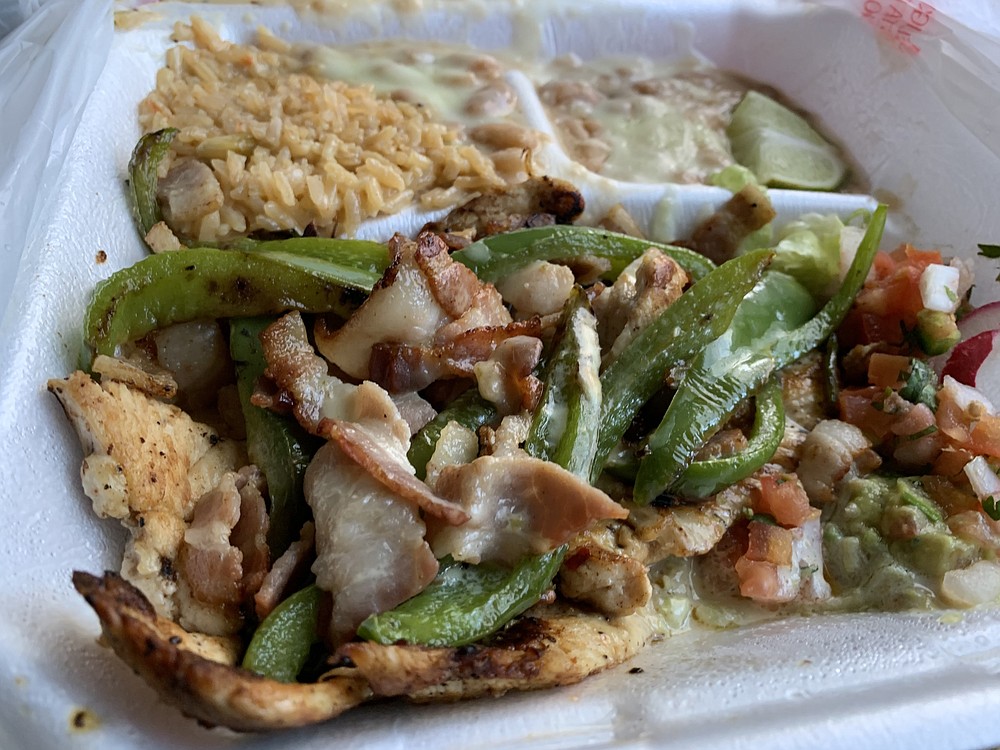 El Torito, which occupies several storefronts in a Bowman Road strip center, is one of the many combination grocery-bakery-taqueria combinations in the area, but pretty much the only one in this trendier part of west Little Rock. The taqueria portion is in one of the storefronts, separated from the rest of the store by a pair of swinging wooden doors. Most of the seating is in socially separated booths; a couple of tables are set, one on top of another, to keep the capacity around 66%.

We were hungry so we let our eye rest on the chicken entree portion of the menu, and in particular on the "special": grilled chicken breast with bell peppers, onion and chunks of bacon (!), topped with cheese dip, which, by the time we got home, had become thoroughly diluted with the meat and vegetable juices. However, it did keep the chicken, which could have been dry and unappetizing, pleasantly moist and tasty. The bacon was a nice flavor touch, though we would have liked it better if it had been a little more thoroughly cooked. The dish comes with moderately flavorful rice; firm, whole beans; and a side "salad" topped with very little guacamole.

The choriqueso, melted cheese and mild chorizo sausage, is purportedly a dip, but by the time we got it home it had cooled and coagulated such that we needed a knife and fork to eat it. Actually a bit of an advantage, though, since they didn't pack any chips with it.

HOW IT WENT: We ordered in person and paid at the store's Plexiglas-guarded front counter. Food came out quickly — as it almost always does at Mexican restaurants. We got two little plastic cups of salsa, one green and one red, but no chips. Staff couldn't have been more friendly.

HOW IT'S GOING: The dining room was as full as covid-limited capacity allowed, and if one more party had come in, we would have felt a little guilty occupying a whole booth while we waited for our order. 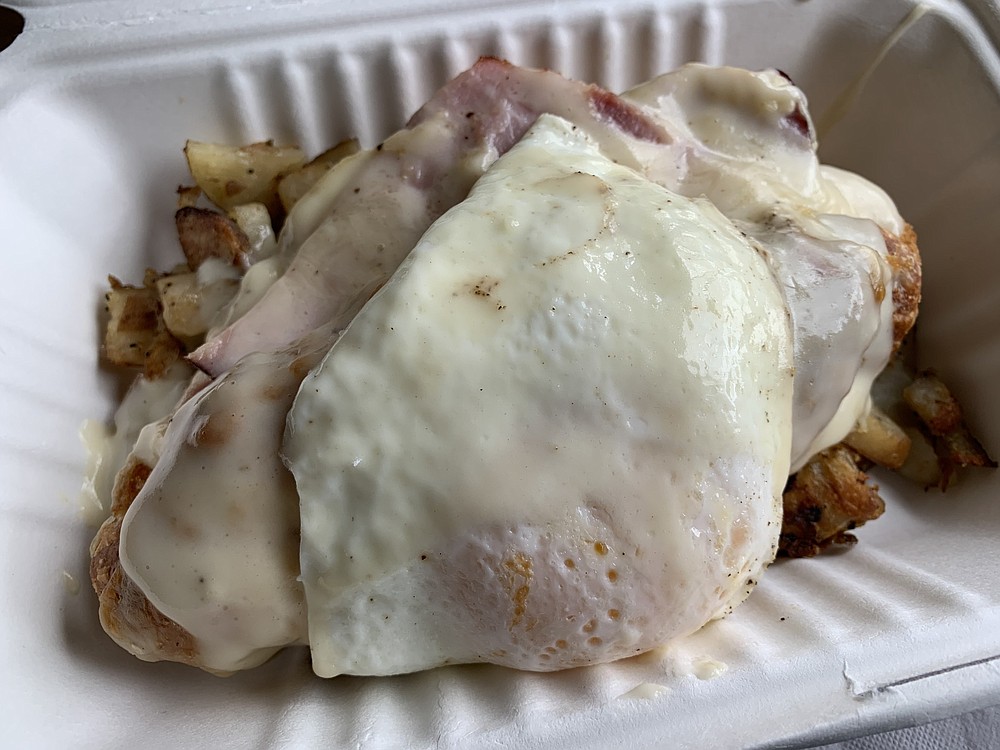 Adding a fried egg to the Croque Ducrot from The Croissanterie makes it a Croque Madame. (Arkansas Democrat-Gazette/Eric E. Harrison)

The Croissanterie operates as a bakery and a food truck with an in-"house" bakery. The Filling Station is one of the retail outlets where you can buy their pre-packaged croissants, and the food truck parks there on a semi-regular basis.

Our Croque Madame — we ordered, but didn't get charged for, the egg — was delectable, even though it wasn't still hot (see below): an open-face crusty croissant topped with ham, melted gruyere and bechamel, served on a bed of fried potatoes.

HOW IT WENT: The Filling Station advertised a Croissanterie Sunday brunch via Facebook, with service that was supposed to start 11 a.m. We arrived at 11:05 to find nearly a dozen folks patiently waiting for the co-owner to finish prepping and start taking orders, which didn't happen until 11:20. Once we placed ours it took only the promised 10 minutes for it to come out. Given that it was in an un-bagged, compostable clamshell, it would have been too much to expect it to be hot when we got it home, nor was it; we enjoyed it nonetheless, though we couldn't finish the chilly potatoes. 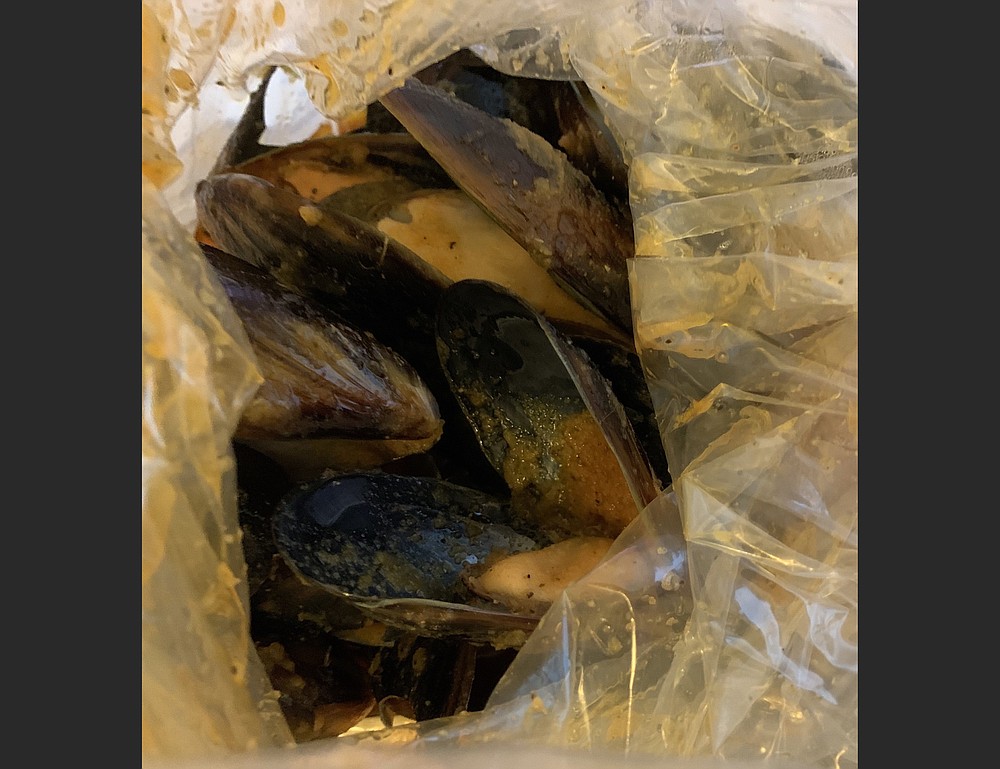 Juicy Seafood appears to be an outlet of a mini-chain (we've found one with the same name and a very similar setup in Savannah, Ga.), but we decided that doesn't disqualify it from our attention. The setup is pretty much the same as at Lulu's Seafood Kitchen and The Mighty Crab: The main draw is seafood (crab, shrimp, shellfish) boiled with potatoes and corn in various sauces with various spice levels in big, thick plastic bags in which it's served.

We stuck with our go-to order, the black mussels, a pound of which is reasonably priced and, with two potatoes and a corn cobette, provides a good-size meal. Ours certainly was. Our previous experience with the lingering aroma of garlic butter in our order from The Mighty Crab on South University Avenue convinced us to go with the less volatile lemon pepper sauce (though, we must say, even packaged inside two plastic bags and a paper sack, we still caught a whiff of it when we loaded it into the car). The mussels were firm and flavorful — there was more lemon pepper sauce in some shells than others — and so were the potatoes and corn.

The crab cakes, however, were a disappointment. First, though we won't swear to it, we strongly suspect that the "crab" meat is really surimi — the quasi-crab made from pollock. (The price also indicates as much.) Consequently, though the cakes were firm, well fried and well drained, a large portion of them were filler and they were comparatively flavorless. There was one bonus: The rectangular foam clamshell gave us a place to deposit our mussel shells.

HOW IT WENT: We ordered and paid in person. We were told it would take 10 minutes to process our order, but it took less than that. And we profited from our recent experience at The Mighty Crab and smartly donned the provided plastic bib and plastic gloves, resulting in a much less messy meal.

HOW IT'S GOING: The restaurant was busy on a Sunday night, both with dine-in customers and a lot of to-go orders. There were two awaiting pickup when we arrived, plus two customers waiting for their orders, and the phone rang several times with more.