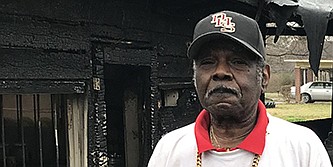 James Harold Jones, the owner of Jones Bar-B-Cue Diner in Marianna, stands by the restaurant‚Äôs pit area, which was destroyed by fire Sunday morning. The restaurant building itself was partially damaged, he said..Photo by Steve Higginbothom

The owner of an iconic Arkansas barbecue restaurant said he will have the place fixed up and reopened in about a month.

A fire Sunday damaged Jones' Bar-B-Q Diner in Marianna and destroyed the barbecue pit structure out back.

James Harold Jones, the owner, said he will build a metal building for the barbecue pit.

He said the back of the diner was damaged but not the dining area in the front, where his James Beard award hangs on the wall along with photographs of tractors and other decor. He said the kitchen had only water damage from fire hoses.

Jones' Bar-B-Q is "one of the oldest African-American-owned restaurants in America," according to the James Beard Foundation, which honored the diner with a America's Classics award in 2012.

The barbecue business has been in the Jones family since the 1910s. The current diner was constructed in 1964.

Jones said a crew was there Wednesday, "cleaning up the burnt stuff."

Two GoFundMe fundraisers for the rebuilding effort had brought in about $80,000 as of late Wednesday.

One was started by Jones' son.

And the other was started by the Arkansas Venture Center.

Also, Southern Restaurants for Racial Justice was sending Jones a $25,000 emergency grant, said Sarah O'Brien, a founder of a coalition of bakers, chefs and restaurant owners who work to benefit Black communities in the South, specifically Black-owned restaurants that are struggling.

There have also been some private donations, said Steve Higginbothom, a former state senator from Marianna who's helping Jones with the rebuilding effort.

Jones said he was cooking pork in the pit behind the restaurant when fat dripped onto the coals and caused a flame that shot up and caught the roof on fire. Jones had gone inside the diner. By the time he noticed the fire, it was out of control.

"The ceiling above was all wood," Higginbothom said. "All that burned ceiling fell down on top of everything."

The fire destroyed the pit structure, which was made of wood, tin and screen, Higginbothom said.

He said the pit will have to be totally rebuilt and the fireplace re-mortared.

Higginbothom said there were two pits behind the restaurant. He said Jones plans to rebuild with only one large concrete pit in the back and a portable metal pit on wheels.

Higginbothom said Jones burns hickory and pecan wood in a large fireplace behind the restaurant, then rakes the hot coals into barbecue pits.

Higginbothom said Jones had some insurance, "but it couldn't have been much." He said fundraising was necessary for Jones to rebuild.

"The response has been so overwhelming so quickly that immediately Monday morning we were able to contact an east Arkansas contractor who's very reputable who's already come in and cleaned up the debris and removed it from the area," Higginbothom said. "He's working with Mr. Jones to design a metal structure in the rear to enclose his cooking area."

"We're going to get him back in business in short order, I think," Higginbothom said.

Jones said screens on the old pit structure allowed some ventilation, along with three Whirlybirds on the roof, referring to a brand name of wind turbines.

Higginbothom said an electric ventilation system may be best in the new, enclosed metal building.

But he advised Jones against it. Ambience is important in barbecue places.

"It's like going back in time," Higginbothom said of getting cold canned drinks from an old refrigerator.

Jones' Bar-B-Q attracts visitors from all over the world, many of whom go to Memphis and then decide to drive 60 miles to the southwest to sample James Beard-winning Arkansas barbecue.

And depending on the number of customers, sometimes Jones runs out of meat.

According to Jones' Bar-B-Q's Facebook page: "Hours are 7 a.m. until the food runs out. There is NO MENU. All Jones BBQ Diner serves is a pork BBQ sandwich on Wonder Bread."

"What Mr. Jones and his family have done is make and sustain a homeplace for African-American barbecue, which is another way of saying American barbecue," said John T. Edge, director of the Southern Foodways Alliance, an institute of the Center for the Study of Southern Culture at the University of Mississippi. "The resilience of this business exemplifies the resilience of barbecue across time and space."

The only other Arkansas restaurant to win a prestigious James Beard award was Little Rock's Lassis Inn in 2020. It also won in the category of America's Classics.