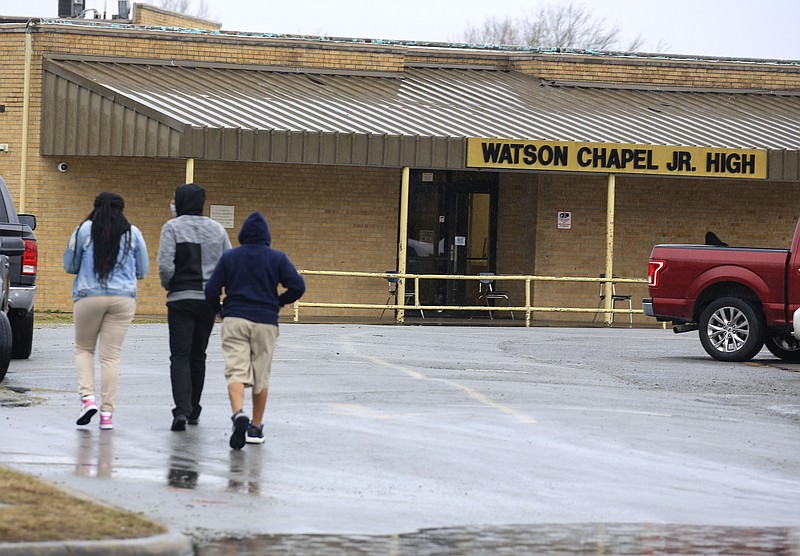 Daylon Burnett, 15, was seriously wounded by a gunman and had been transported Monday to Arkansas Children's Hospital in Little Rock. In a Facebook post Wednesday evening, his mother wrote, "Y'all my boy got his wings at 5:35 [p.m.]"

In a statement issued on Facebook, the Watson Chapel School District wrote, "Our thoughts and prayers are with his family and friends."

Another student, 15-year-old Thomas Quarles, was identified during a probable-cause hearing Wednesday morning as the suspect in the shooting. Quarles was arrested Monday shortly after the shooting, but authorities had not publicly identified him prior to the hearing.

Prosecuting Attorney Kyle Hunter said during Wednesday morning's hearing that authorities were seeking a first-degree battery charge, but noted that the state would seek a homicide charge if Burnett died.

The suspect's appearance during the open proceeding of District Court -- as opposed to the closed proceedings of juvenile court -- for the purposes of the probable-cause hearing suggests prosecutors will seek to charge Quarles as an adult when formal charges are filed.

Authorities believe the shooting was a targeted incident and not a random act, Sergeant said Monday.

The probable-cause affidavit is based on statements of Pine Bluff Police Department detective Keith Banks, according to a copy of the document obtained from the prosecuting attorney.

Referring to Banks' affidavit, Hunter told the judge that officers responded Monday morning to a reported shooting at the junior high school.

One officer reported that when she entered the building by the principal's office, she was met by school employees and shown to where the shooting had occurred in a hallway in front of the library.

A school nurse was administering medical aid to Burnett, who was breathing and had a slight pulse as the nurse applied pressure to the back of his head, Hunter told the judge.

Two .380-caliber shell casings were found next to Burnett, he said.

As officers cleared the school searching for gunmen, a student told detective Tamina Smith that Quarles shot Burnett, according to the affidavit.

Police obtained a description of Quarles' clothing and learned he was last seen leaving toward Sulphur Springs Road, Hunter said.

A member of a canine search team from the Arkansas Department of Correction encountered a person in a burgundy shirt and khaki pants running beside a house at the end of East Greenway Drive, Hunter said.

As the canine search team approached the east side of a residence, the person was seen crouching behind an air conditioning unit, he said, and the person was identified as Quarles.

"He was instructed to lay on the ground and was taken into custody without incident," Hunter said.

A black Ruger LCP handgun was found in Quarles' right front pocket, along with a lighter in his left pocket and a black cellphone on the ground. The items were taken as evidence, Hunter said.

After Quarles was transported to the Police Department and advised of his rights along with his mother, they asked for a lawyer, Hunter told the judge, and questioning ended.

According to the affidavit, Quarles was then transported to the Jack Jones Juvenile Justice Center.

Hunter said that because of the seriousness of the act, the likelihood that Quarles would leave the jurisdiction and "the condition of the victim in this case," the state was requesting the $1 million bail.

Guess wrote that additional security would be provided by the Pine Bluff Police Department and the Jefferson County sheriff's office.

"The Junior High staff have been on site all week delivering virtual instruction to our students and working to prepare for the return of students to the campus," Guess wrote. "We think it is imperative that all students take advantage of the many, many professionals who will be present to provide counseling and guidance to our students as they return to school."

According to Guess' statement, counselors from other district schools, as well as private and public agencies, would be available. Local pastors, youth ministers and the Pine Bluff Police Department's chaplain unit also will be available.

"The events of this week have been tragic," Guess wrote. "It has been a traumatic week for our students and our staff. I truly believe that students and staff will work together in the coming days to the best benefit of us all."