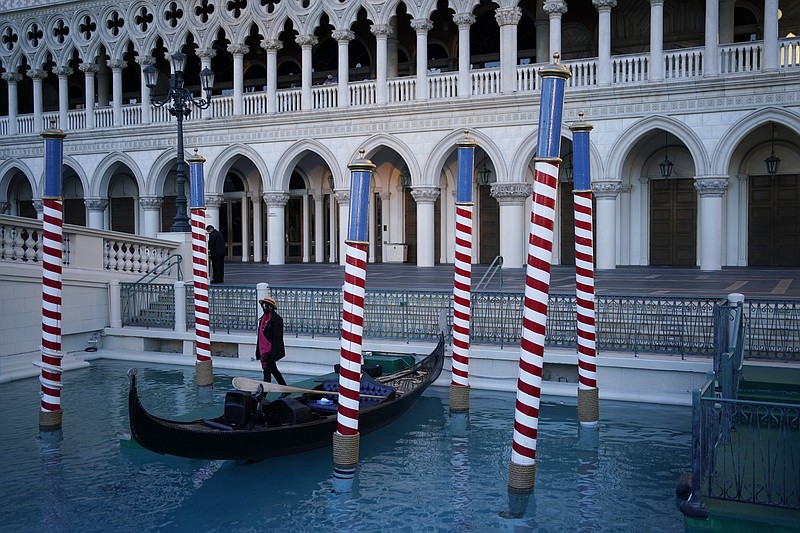 A gondolier stands by a boat near a quiet pedestrian walkway at the Venetian hotel and casino in Las Vegas, Feb. 4, 2021. The toll of the coronavirus is reshaping Las Vegas almost a year after the pandemic took hold. The tourist destination known for bright lights, big crowds, indulgent meals and headline shows is a much quieter place these days. (AP Photo/John Locher)

Las Vegas Sands is selling the iconic Venetian casino resort and its Sands Expo and Convention Center for $6.25 billion, withdrawing from gambling operations on the Las Vegas Strip after changing the nature of the casino business there and just about everywhere else.

The name of the Venetian, the expo center as well as the Palazzo, the Sands' luxury casino and resort that is part of the same complex, will remain, and the company's headquarters will stay in Las Vegas.

But the company led by Sheldon Adelson until his death this year will effectively cease U.S. operations. Under Adelson, the company's focus turned to Asia years ago, where revenue eventually outpaced even the operations on the Las Vegas Strip.

Under the two-part deal announced Wednesday, Vici Properties will buy the casino and resort and all assets associated with the Venetian Resort Las Vegas and the Sands Expo for $4 billion. And Apollo Global Management will acquire the operations of the Venetian for $2.25 billion.

The global pandemic broadsided Las Vegas, shuttering the Strip where Las Vegas Sands has been the biggest operator for years. Sales growth vanished last March as infections spread across the U.S. The company posted a quarterly loss of almost $300 million in January.

The sale comes just two months after the death of Adelson, who transformed the landmark Las Vegas casino that was once a hangout of Frank Sinatra's Rat Pack into a towering Italian-inspired complex.

Adelson reframed the target audience in Vegas, focusing on conventioneers and even families. He recognized that the real potential was not on the casino floor, as it was in the 1960s, but at the hotels, resorts and convention centers that surround them.

"Sheldon Adelson changed the Las Vegas market with his emphasis on conventions. He put a premium on that," said University of Nevada, Las Vegas history professor Michael Green.

Adelson's purchase of the Sands in 1989 came in a pivotal year in which the Mirage opened, kicking off an age of mega-resorts on the Strip, along with the death of two longtime casino owners with mob ties, Benny Binion and Moe Dalitz, the sunset of an era in which the city was linked to organized crime.

Green said Adelson's purchase did not at the time seem like a turning point, but it ultimately was.

After explosive growth in Las Vegas, Adelson turned his eye to Asia. The Sands expanded to Macao, the only place in China where casino gambling is legal, and where Adelson directed his company to build land where there wasn't any, piling sand up to create the Cotai Peninsula. Operations in Asia quickly outgrew those in the U.S.

The Sands said Wednesday that Asia is where the company's focus will remain.

"As we announce the sale of The Venetian Resort, we pay tribute to Mr. Adelson's legacy while starting a new chapter in this company's history," said Chairman and Chief Executive Officer Robert Goldstein. "This company is focused on growth, and we see meaningful opportunities on a variety of fronts. Asia remains the backbone of this company and our developments in Macao and Singapore are the center of our attention."

[Video not showing up above? Click here to watch » https://www.youtube.com/watch?v=ZfG3TVvmRdc]

Some industry analysts also expect the Sands will use the proceeds from the sale to push more aggressively into online gambling, something Adelson had once lobbied against.

"Its efforts thus far have lagged peers, and for it to get involved in the next great thing in gaming, the company would likely have to buy its way in, and now has a pot of money to do so," wrote JPMorgan analyst Joseph Greff.

Vici will enter a triple-net lease agreement with Apollo for the Venetian. The lease will have an initial total annual rent of $250 million and an initial term of 30 years, with two 10-year tenant renewal options.

The sale is expected to close by the fourth quarter.

Information for this article was contributed by Michelle L. Price of The Associated Press.