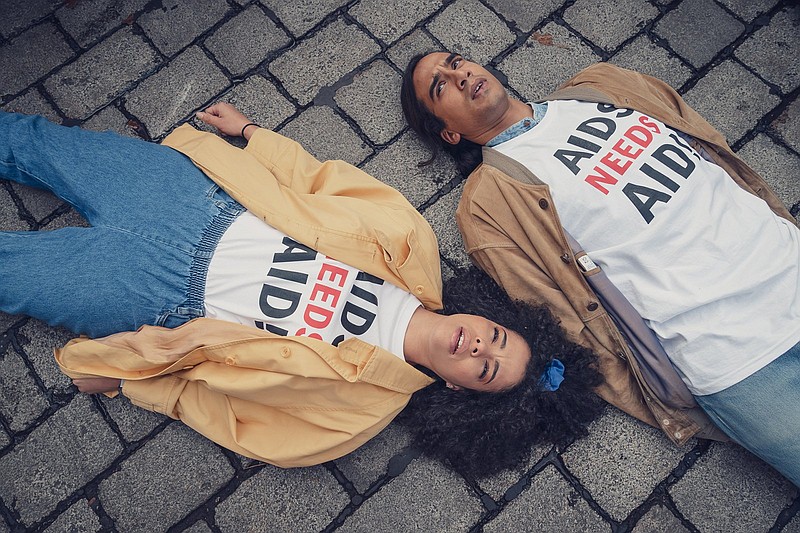 Already a smash in Britain, the five-episode limited series "It's a Sin" is now streaming on HBO Max. It's a marvel.

The story explores 10 years among a tight-knit group of young adults, mostly gay men, who meet in London in 1981. The city shines with sensual promise, like a revved-up combination of a magical forest out of Shakespeare and a never-ending coming-out party. Series creator Russell T Davies, who wrote the original Manchester, England-set 1999-2000 series "Queer as Folk," introduces his characters at the cruel, governmentally ignored dawn of the AIDS epidemic. We get to know them as they confront the even crueler loss of so many young lives throughout the years that followed.

But already I'm risking mischaracterization of what Davies, director Peter Hoar and a splendid cast of newcomers and seasoned veterans have accomplished with "It's a Sin."

Like Tony Kushner's "Angels in America," the show's sheer exuberance, the interplay, the sexual abandon before the clouds roll in — it all infuses Davies' narrative with an esprit that blessedly never feels like an easy set-up for the heartache to come.

The primary characters meet in drama school. Bright-eyed, eager Ritchie (Olly Alexander) comes from the Isle of Wight and a closeted home life without much real love going for it. Jill (Lydia West) eventually finds the elusive golden ticket of a steady paycheck, thanks to a chorus role in a "Les Miz"-y West End musical called "The French Revolution." She becomes the confidant and den mother to her friends and fellow roommates.

There's Roscoe (Omari Douglas), whose deeply religious Nigerian immigrant family cannot cope with Roscoe's sexuality. From Wales, the sweet, shy Colin (Callum Scott Howells) becomes a Savile Rowtailor shop apprentice and finds a mentor and friend in co-worker Henry (Neil Patrick Harris), while fending off the advances of the shop's predatory proprietor. The life Henry lives with his (unseen) longtime lover is a life utterly foreign to Colin, barely out of the closet even among friends.

Others, including Ritchie's sometime lover Ash (Nathaniel Curtis), become part of the bustling, joyous communal flat known as "The Pink Palace." There's a lot of sex in "It's a Sin." The main characters are still teenagers at the start, figuring themselves out and finding their newfound families in a city big enough to hold everyone.

Davies shows us so many different types of discovery and heartache here, and he has a sharp, loving eye for lives lived fully, theatrically — in an increasingly dangerous present tense. The emblems of the Thatcher era are everywhere, in pop culture (Ritchie gets a job on what appears to be '80s-era "Doctor Who"), and in politics. Stephen Fry portrays a conservative MP who becomes Roscoe's down-low lover. In "It's a Sin," which takes its title from the Pet Shop Boys song, the characters afflicted with AIDS-related illness early on become nearly invisible — confined to hospital isolation wards, whisked away by shame-stricken family members to die anywhere but among friends in London.

Your heart may break at regular intervals watching this series. Yet the writing and the performances are so beautifully sustaining, with such easy-breathing changes in mood and focus, by the end you're simply grateful to have spent time with such good company.

Some critics have found a suspect marginalization of Davies' Black and brown characters. Though West is quite perfect in the role, Jill serves as de facto observer rather than fully realized participant. I'm not sure about the final episode's focus on Ritchie's mother (Keeley Hawes, also excellent; everyone is), which takes the story in a direction that may have needed another episode to fully work through.

Small matters. If you too were a young adult in the early '80s, you may find "It's a Sin" working a special kind of bittersweet magic, whatever your own story. In one scene, set at a funeral, there's a standoff between the dead person's arrow-straight, willfully uncomprehending family and his supportive, defiant, out-and-proud friends. I attended a small-town Minnesota funeral, a long way from the Twin Cities, that was painfully similar to the one depicted by Davies, and "It's a Sin" brought it all back — the gulf between a dead man's early years, in one place, and his adulthood and authentic personhood in another.

Davies has said in interviews that he deliberately left AIDS out of "Queer as Folk," because he didn't want those characters to be defined by loss and grief. With "It's a Sin," he has now reckoned fully with what the '80s were like for him, and the people he knew and loved. The show is about people, not positions, but it's about people who learn the price of taking a position, a stand, as well as people who pay the higher price of not doing so. All this without cant and speechifying. Plus it's really funny and truly moving.