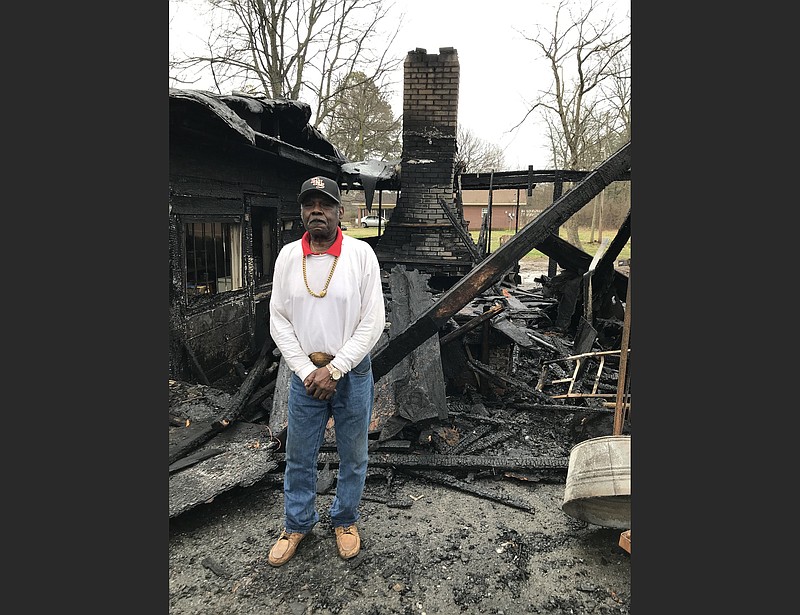 James Harold Jones, aka “Mr. Harold,” stands in the fire-damaged pit area of his Jones Bar-B-Q Diner in Marianna on Sunday. Locals and fans from across the country are contributing to the rebuilding of the award-winning establishment. (Special to the Democrat-Gazette/Steve Higginbothom)

In case you missed this earlier in the week, James Harold Jones says he was smoking pork in the pit behind his Jones' Bar-B-Q Diner in Marianna on Sunday morning when fat dripping onto the coals caused a flame that shot up and caught the pit-area roof on fire. The blaze destroyed the pit area and damaged the main building; the only harm to the kitchen was water damage from fire hoses and the front dining area is reportedly unharmed. Jones tells Democrat-Gazette reporter Bill Bowden he plans to construct a metal building for the pit area and repair the rear of the main building.

In 2012, the restaurant became Arkansas' first to win a prestigious James Beard Award, in the America's Classics classification. (Little Rock's Lassis Inn received one in the same category in 2020.) The family business has been around since about 1910; in the current building since 1964. It opens at 7 a.m. until the food — only a $3.50 pulled pork sandwich with Jones' signature sauce on Wonder Bread — runs out, which is sometimes as early as midmorning and almost always before noon.

A family-created GoFundMe page (tinyurl.com/ryz9s8fa) seeking initially to raise $10,000 toward repairs had more than exceeded that — $13,065 — by our Tuesday morning deadline. A second page, created by the Arkansas Venture Center (tinyurl.com/689d4sjh), a Little Rock-based nonprofit, as of our Tuesday morning deadline had raised another $34,400 (out of a $50,000 goal) with all proceeds going directly to the family. And The New York Times reports that Southern Restaurants for Racial Progress is providing a $25,000 emergency grant.

In the wake of Gov. Asa Hutchinson's relaxing of restrictions last week on — among other things — restaurant capacity, we received reports that some restaurants that had expanded to full capacity were packed to the walls over the weekend, pandemic notwithstanding. Meanwhile, food blog The Mighty Rib was corralling comments from area restaurants via social media, most of which insisted that they will remain at limited capacity — 50%-66% — or restrict their service to takeout only, for the sake of protecting customers and staff. Among the more prominent places on the list: Trio's, Leo's Greek Castle, The Faded Rose, The Pizzeria, The Fold, Raduno, So, Cantina Laredo, Kemuri, The Root, Ciao Baci, Doe's, The Pantry and The Pantry Crest, EJ's, Lindsey's Hospitality House, Loca Luna, Red Door, the Butcher Shop, Brave New Restaurant, La Hacienda, Buffalo Grill and Star of India. Many insisted they'd keep their capacity under 100% at least until their staff got their vaccinations; many patrons, meanwhile, insisted they did not feel comfortable dining in at all, and especially not in places that would be packed. Some patrons and restaurateurs also pushed for moving restaurant workers to the front of the vaccine eligibility list.

Bruno's Little Italy, 310 Main St., Little Rock, reopened Friday after a closure of just over a month, "after quarantine and sanitization — as well as the 'snowpacalypse,' which included a broken water main and a flooded basement for us and our restaurant neighbors," according to a Facebook post from owner Gio Bruno. He says staff members who contracted covid-19 have recovered. The pandemic and weather have also caused disruptions to its supplies; Bruno says the restaurant would have opened Feb. 25 if the truck carrying, among other things, its bread hadn't been delayed. The phone number is (501) 372-7866. 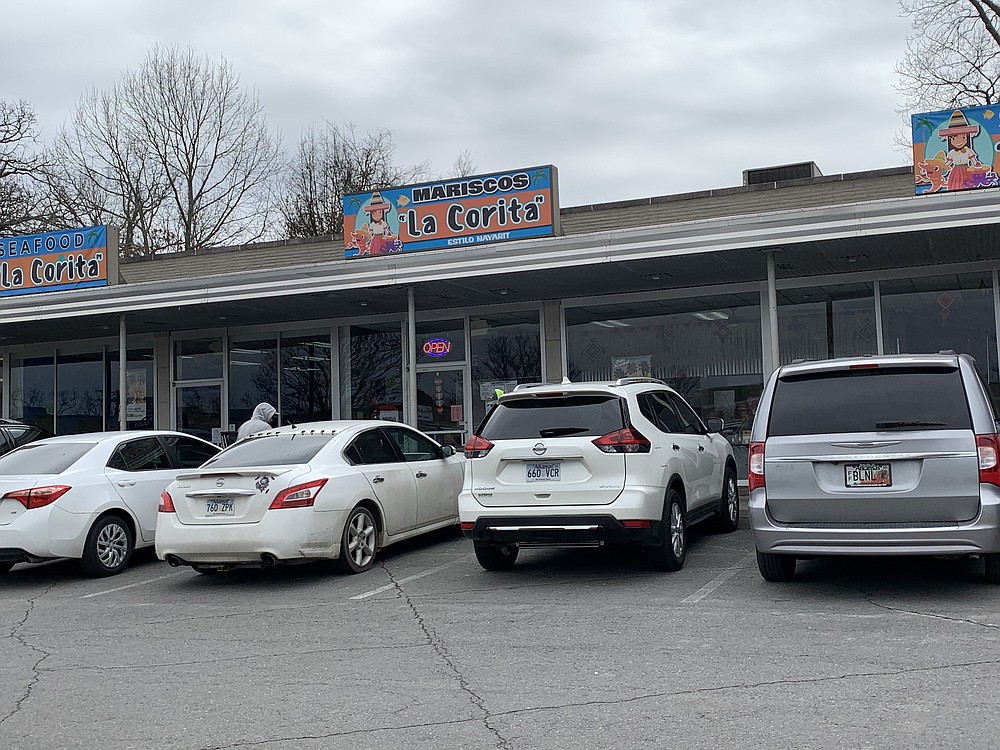 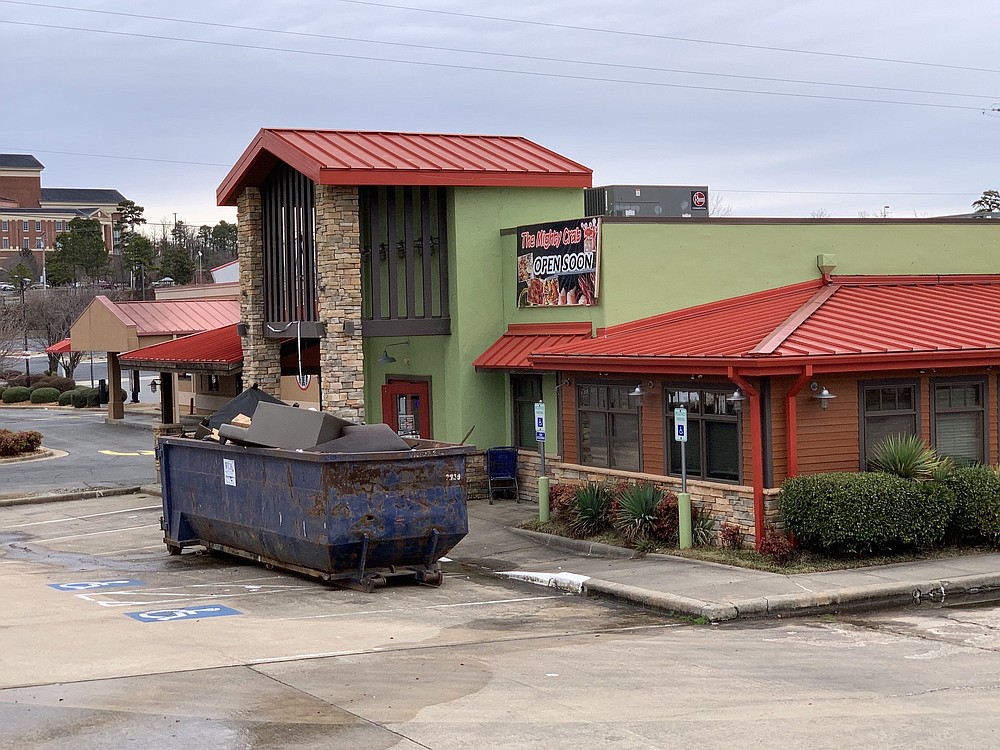 A third Mighty Crab is pending in the building at 225 N. Shackleford Road, most recently The DacqShack and previously Famous Dave's Bar-B-Que in west Little Rock. You will recall the first opened in March 2020 in North Little Rock's Lakewood Village and the second opened in December at 1817 S. University Ave., in the former Catfish City.

And speaking of seafood boil restaurants, we're told a Red Hook Seafood & Bar is going into the former New China building, 2104 Harkrider St., Conway. We lack a timeline or other details (a query to chain headquarters went unanswered by deadline), but we have found out via the website (redhookseafood.com, where you can also check out the menu) that there are six other locations — five in Tennessee (Jackson, Poplar, Winchester, Wolfchase and Union) and one in Texas (San Antonio). The focus is on Cajun-style seafood (shrimp, oysters, blue crab, snow crab, crawfish, clams, mussels, Dungeness crab and lobster) in a choice of four sauces and at least three "heats," plus fried stuff, "signature wings" and "daily specials ranging from Colossal Shrimp or Lobster Tail to Alaskan King Crab Legs." Hours at all other locations are 11:30 a.m.-10 p.m. Sunday-Thursday, 11:30 a.m.-11 p.m. Friday-Saturday.

Blame the pandemic if you like — we do — but we missed the December opening of Bamboo 3 Hibachi Japanese Steakhouse & Sushi, 6606 Colonel Glenn Road Little Rock, in what was the last home of Ceci's Chicken N Waffles (now a food truck) and previously a KFC. From the evidence of the sign, it is a sibling of the Bamboo Hibachi on Camp Robinson Road in North Little Rock. Hours are 11 a.m.-2.30 p.m. and 4-9.30 p.m. Monday-Saturday. The phone number is (501) 406-7950.

And the Arkansas Symphony Orchestra Guild is putting together an online fundraiser it's calling Symphony of Flavors, featuring cooking demonstrations from four local chefs in their own kitchens, with gourmet baskets and music, Thursday nights in April.

The schedule (all demonstrations begin at 7 p.m.):

◼️ April 22: "Ode to Italy." Eric Isaac, executive chef and owner of Ristorante Capeo, creates Chicken Piccata over homemade noodles and will take viewers on a tour of the restaurant's wine cellar.

Tickets are $200 for all four demonstrations, $75 per; ticket buyers will receive an email link to join. Tickets include delivery of goodies, wine and recipes from each night's featured chef. Participants will receive the recipe and menu the day before airing and can buy ingredients and cook along with the chef. Videos of the demonstrations will be available to ticket buyers online for two weeks following. Call (501) 258-6149 or visit ArkansasSymphony.org/flavor.