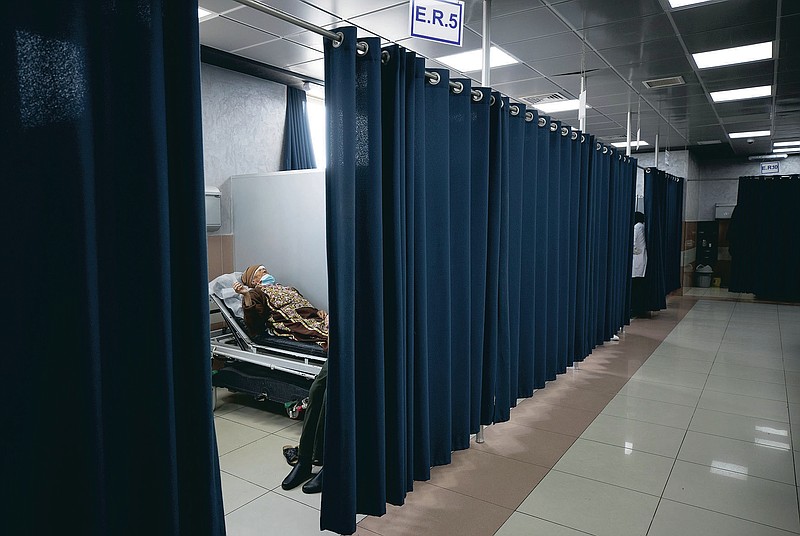 A Palestinian patient infected with COVID-19 is placed under medical observation at the emergency unit, at the Palestine Medical Complex, in the West Bank city of Ramallah, Tuesday, March 2, 2021. (AP Photo/Nasser Nasser)

RAMALLAH, West Bank -- Israel's spring of hope is unfolding alongside the Palestinians' winter of despair.

More than half of Israel's population of 9.3 million have been vaccinated and the lines for shots have dwindled. There's enough of a surplus that Prime Minister Benjamin Netanyahu wants to send thousands of doses to friendly countries. Hotels and restaurants are set to open next week.

In the Israeli-occupied West Bank, the covid-19 wards are overstretched, testing centers are as busy as ever and new lockdown measures have been announced. The Palestinian Authority has acquired only a few thousand doses -- not even enough for front-line health workers -- and reported nearly 2,000 new cases on Tuesday alone.

It's a stark illustration of the disparity at the heart of the Middle East conflict -- one of the few aspects of life here that haven't changed over the past year.

Israel cites past agreements that say the PA is responsible for health care in areas it administers. Human rights groups say Israel is shirking its obligations as an occupying power. The PA, perhaps out of concern for its own image, insists it has secured its own supplies.

In the meantime, West Bank hospitals are filling up. A woman who identified herself as Umm Bashar brought her mother to the main hospital in Ramallah two days ago after her oxygen levels dropped. She's still waiting in the emergency unit for a bed in a newly expanded covid-19 ward.

"They told us that because of the coronavirus, all the beds are full," she said. "Everything has become very hard."

An emergency room medic, who was not authorized to talk to reporters and so spoke on condition of anonymity, said 14 suspected covid-19 patients arrived Tuesday morning, a day after 24 were transferred to a ward for treating the disease.

At a testing center across town, scores of people gathered in an auditorium waiting to be swabbed. Many showed symptoms, and several said members of their households had tested positive.

"The outbreak is very bad, and the cases themselves are very bad, worse than in the beginning," said Tayeb Zeineddin, who has been working at the test center since the pandemic began. He said more than 1,000 people show up daily for tests.

The Palestinian Authority has reported more than 130,000 cases in the West Bank since the outbreak began, including at least 1,819 cases Tuesday. At least 1,510 have died, and dozens are in intensive care. In Gaza, which is ruled by the militant Hamas group and under an Israeli-Egyptian blockade, authorities have reported over 55,000 cases and at least 553 deaths.

The effects go far beyond the disease itself.

The World Bank estimates the Palestinian economy shrank by 11.5% in 2020, with tourism and restaurant sectors hit particularly hard. Unemployment in the West Bank spiked to 15% this year, and about 1.4 million Palestinians are living in poverty, it said last month.

Israel launched one of the world's most successful vaccination campaigns in December after Netanyahu secured millions of doses from drug giants Pfizer and Moderna. Demand has leveled off after nearly 5 million people received at least one dose, so Israel is now using a mix of incentives and threats to try to get the free shots to holdouts.

In recent days, Netanyahu has come under fire for reportedly planning to share tens of thousands of surplus vaccines with allies in Africa, Europe and Latin America while providing little to the Palestinians. Israeli media have said Netanyahu sought to reward countries that support Israel's claim to contested Jerusalem and those with budding ties to Israel. Israel's attorney general froze the program, determining Netanyahu had improperly acted alone.

While vaccinating its own Arab population, Israel has provided only 2,000 Moderna doses to the Palestinian Authority, and it recently approved plans to vaccinate the over 100,000 Palestinians from the West Bank who work in Israel and Jewish settlements.

Israeli public health officials have urged the government to go even further and vaccinate the entire West Bank population, given the large degree of interaction between the sides.

"There is no public health justification or moral argument for not providing vaccines to Palestinians," two leading public health experts wrote in an op-ed in Israel's Haaretz newspaper. "A joint public health response between Israel, Gaza and the West Bank remains critical."

Israel captured the West Bank, Gaza and east Jerusalem in the 1967 war, territories the Palestinians want for their future state. Under interim peace agreements, the PA is responsible for health care in Gaza and the areas it administers in the West Bank, but both sides are supposed to cooperate to combat epidemics.

"We are living under occupation, so they bear a huge part of the responsibility," said Ibrahim Abu Safiya, who brought his mother to the ER overnight Tuesday and also was waiting for a covid-19 bed to open up.

The PA says it has secured tens of thousands of vaccine doses through a World Health Organization program for poor countries and private agreements with drug makers but has only managed to import 10,000 doses of Russia's Sputnik V vaccine. Along with the Israeli vaccines, that's enough to inoculate 6,000 people out of a population of nearly 5 million.

There are some indications that -- in the absence of vaccines -- the Palestinians are developing some degree of protection on their own.

A recent study supported by the WHO showed that about 40% of Palestinians in the West Bank and Gaza have contracted covid-19 since the pandemic began, indicating a large number of asymptomatic cases.

The study, carried out by the Palestinian Health Ministry and other official bodies, is based on samples taken from 6,000 people and tested for markers expected to be present in the blood of those who have had covid-19.

"Most likely, 40% of the population has already undergone infection and has also acquired antibodies and therefore has some level of protection at the moment," said Dr. Gerald Rockenschaub, who was head of the WHO for the Palestinian territories at the time of the study.

More study is needed to explain why the fatality rate would be so low, but Rockenschaub it was likely connected to the large percentage of young people, who tend to have lighter symptoms, in the overall population.

"Quite a substantial proportion of those who showed the antibodies didn't even know that they had the infection," he said. 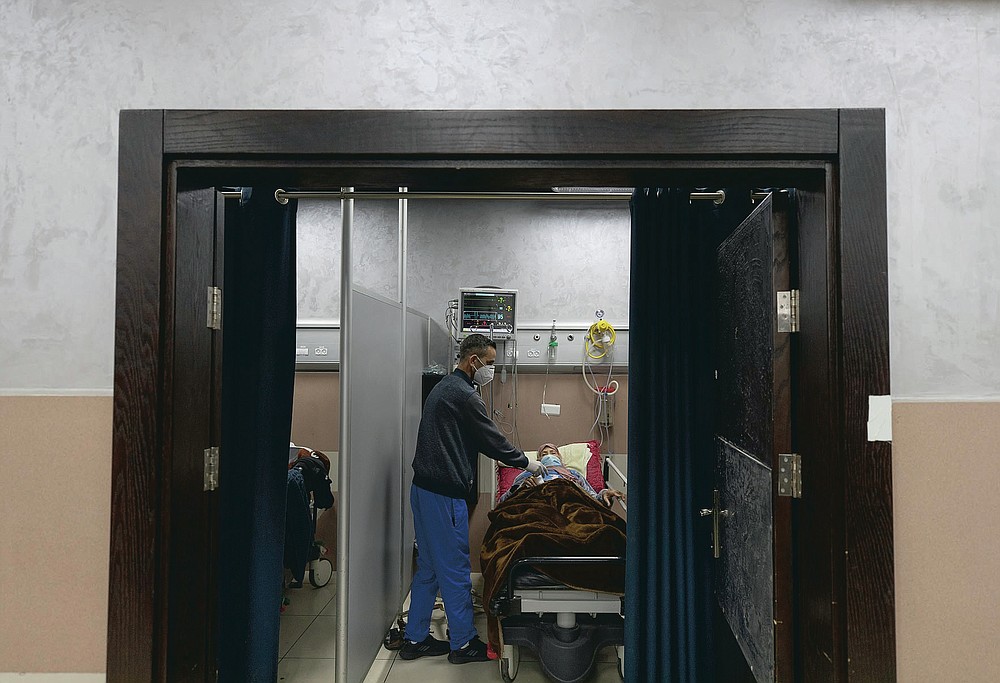 A medical staffer attends a Palestinian patient infected with COVID-19 at the emergency unit, of the Palestine Medical Complex, in the West Bank city of Ramallah, Tuesday, March 2, 2021. (AP Photo/Nasser Nasser) 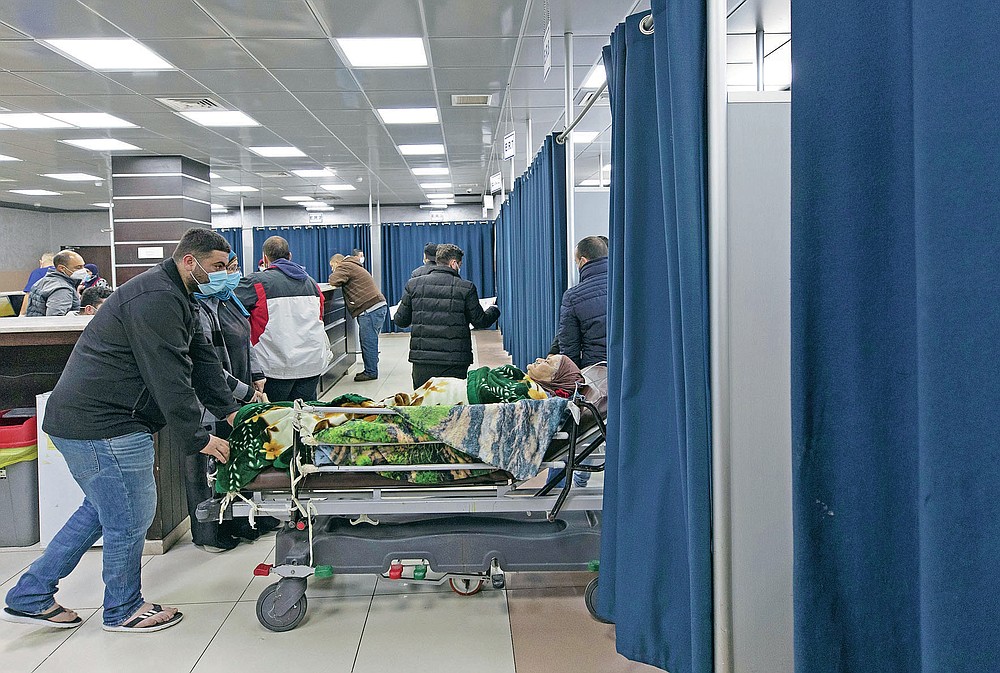 A Palestinian patient infected with COVID-19 is admitted for medical observation at the emergency unit, in the Palestine Medical Complex, in the West Bank city of Ramallah, Tuesday, March 2, 2021. (AP Photo/Nasser Nasser) 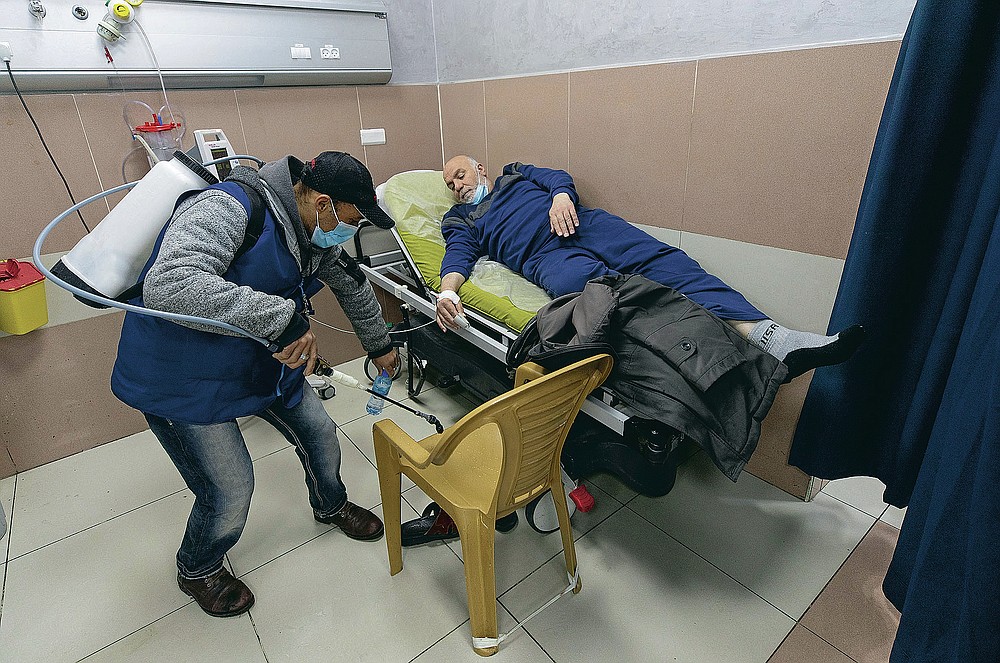 A Palestinian medical staffer sterilizes a room occupied by a COVID-19 patient who is under medical observation, at the emergency unit, of the Palestine Medical Complex, in the West Bank city of Ramallah, Tuesday, March 2, 2021. (AP Photo/Nasser Nasser) 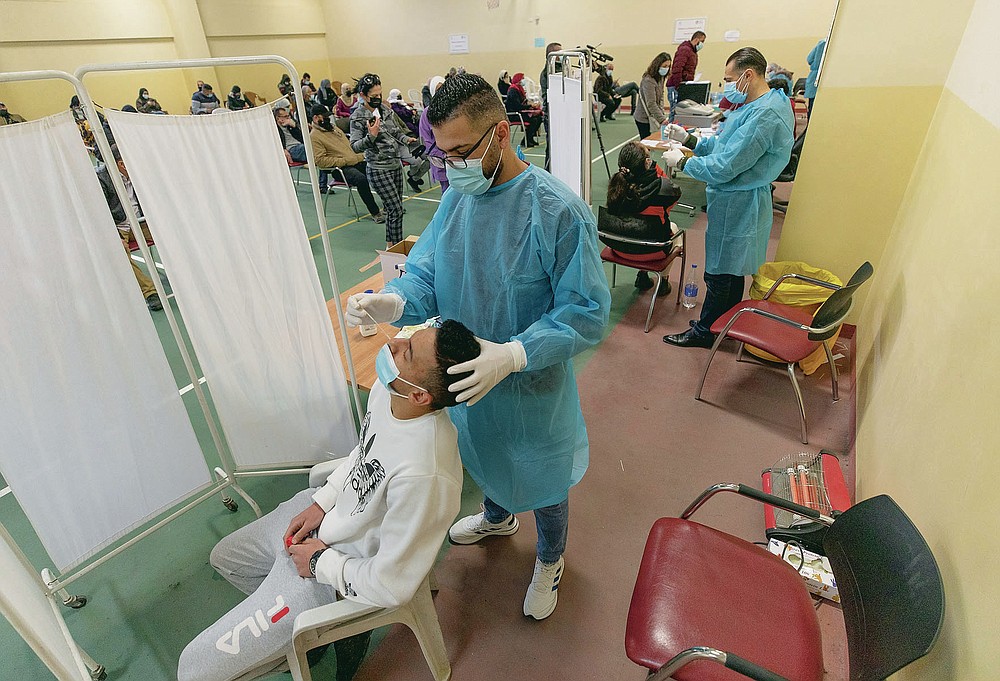 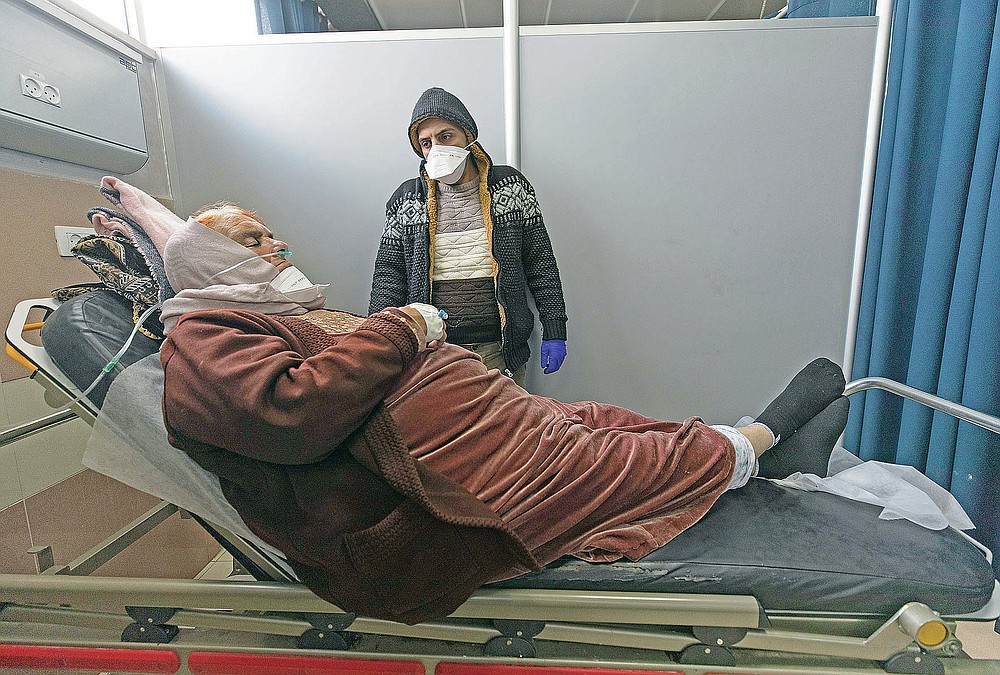 Ibrahim Abu Safiya attends to his mother who is infected with COVID-19 while she is under medical observation at the emergency unit, of the Palestine Medical Complex, in the West Bank city of Ramallah, Tuesday, March 2, 2021. (AP Photo/Nasser Nasser) 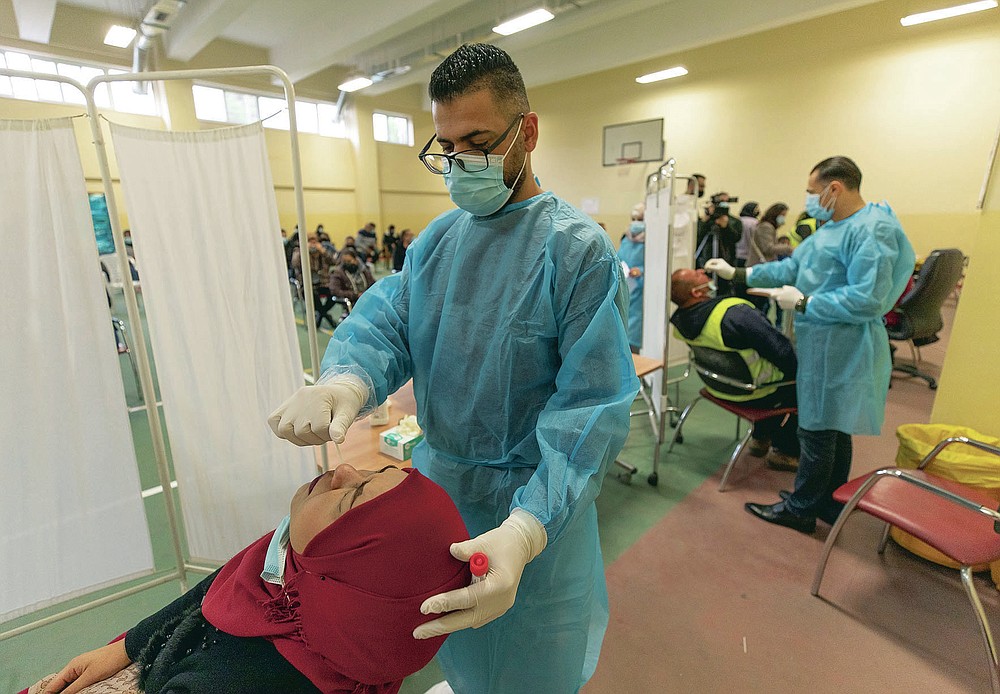 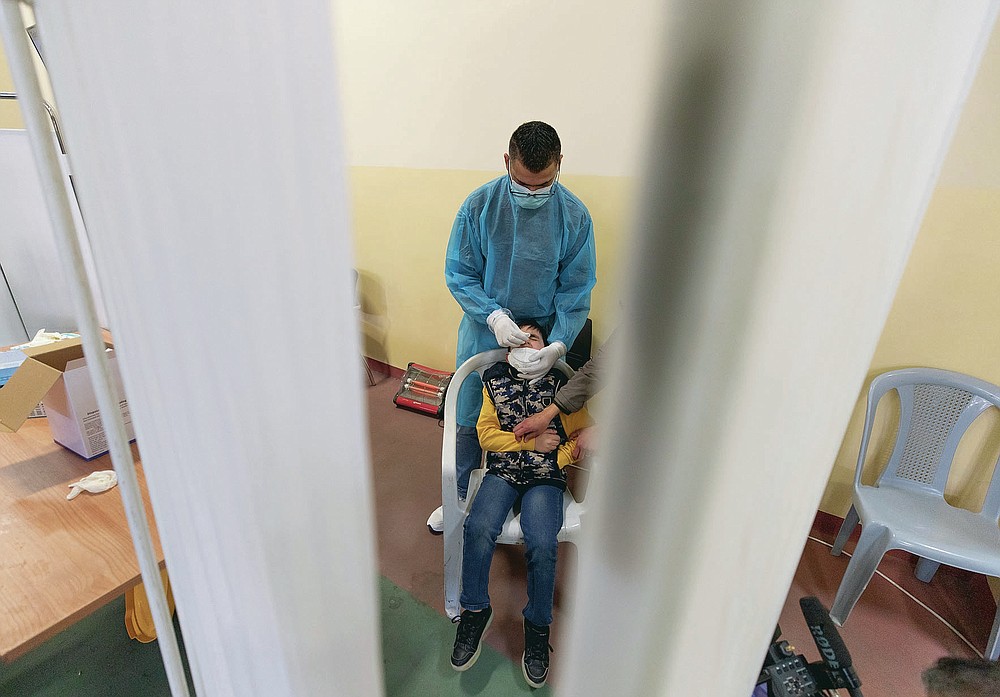 A health care worker takes a nasal swab sample from a Palestinian child at a COVID-19 testing center, in the Palestine Medical Complex, in the West Bank city of Ramallah, Tuesday, March 2, 2021. (AP Photo/Nasser Nasser)
ADVERTISEMENT