From Crownpoint to Harvard: Navajo graduate leads by serving 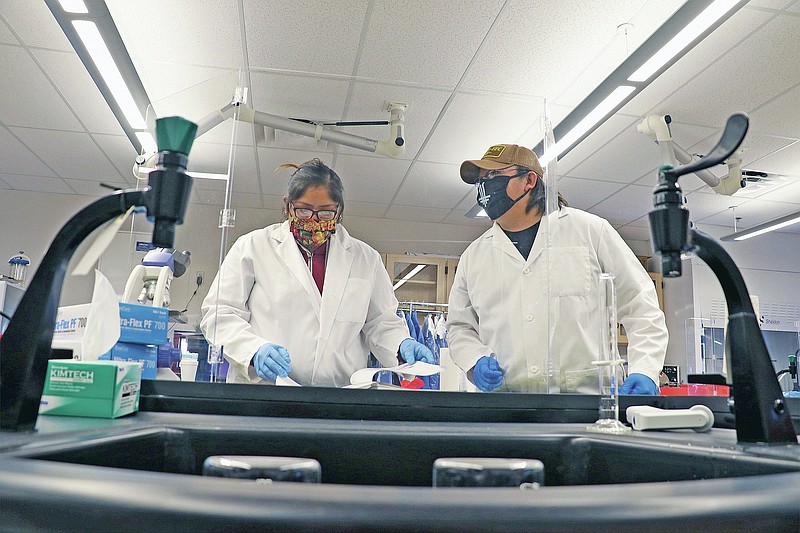 This undated image provided by Navajo Technical University shows Robinson Tom, right, assisting general education graduate Noelle Clark with a biology assignment at the university in Crownpoint, New Mexico. Tom worked as a lab assistant in the NTU Wet Labs upon graduation in May 2020. (Daniel Vandever, NTU, via AP)

GALLUP, N.M. -- Robinson Tom was an environmental science student at Navajo Technical University when he was assigned in 2014 to compare microorganisms that could survive in the harsh environment of Mars.

The red planet is 50 million miles farther away from the Sun than Earth, which means it gets a lot less sunlight and temperatures average minus 81 degrees Fahrenheit.

"It sounds like a simple assignment, but I started getting into the research of soil content, atmosphere content, and which organisms could survive in very cold temperatures," Tom said. "Because of that assignment, I found out that I enjoyed biology and chemistry a lot more."

That early assignment eventually changed the course of Tom's life. It opened the door to an exciting career in the science field that has taken him to Boston, Mass., where he now does research at Harvard University.

Tom, who grew up in the Navajo Nation community of Little Water, changed majors in 2014. He was one of the first students to enroll in the then-new Biology Department at Navajo Tech. At the time, he was the only one in his cohort because he was already ahead of the group.

"I had to rely on myself because I had no students to look up to," Tom said. "I had to be that student."

Tom said he was aware there was no science culture in the region. He believed more young Navajos could follow on a scientific path if they had a niche and a support group. So he founded BICEPS, a student organization to help others with similar interests. BICEPS stands for biology, chemistry and environmental physics.

Through BICEPS, they were able to secure internships, do science demonstrations at local K-12 schools and build research collaborations with other institutions.

One of those institutions is Harvard.

"If you talk about science on the Navajo Nation, the STEM culture is kind of missing there," Tom said. "With the BICEPS program, we got to reach out and influence young generations. It was a lot of fun."

Through BICEPS, Navajo Tech science students visited schools in Crownpoint and Thoreau in New Mexico and in Window Rock, Ariz. They did demonstrations in chemistry and biology in a way younger students could relate to. They used the concept of cooking to teach chemical reactions. Tom showed students how to cook chile peppers.

"You chop it up and boil it with some butter and, as it cools down, you see a phenomena where the water moves away from the oil," Tom said. He told students oil molecules are hydrophobic and repel water.

"Everybody knows that corn is one of the main foods for Navajo. It turns out, when you eat corn, you can't get all the nutrients. That's because these plants are very tough to break. So there's ways to prepare it to access all the nutrients," Tom said. "Traditionally in Central America or Meso America, they developed a way to use limestone powder to break the cells of the corn to have it edible. The Navajos on the other hand learned that you can do that without lime. You can use ash."

The process is called nixtamalization. In areas of Guatemala and southern Mexico, heated chunks of limestone would naturally be used, and experiments show hot limestone makes the cooking water sufficiently alkaline to cause nixtamalization. This process removes toxins from the corn, increasing its nutritional value, flavor and aroma. Lime and ash are highly alkaline and an alkaline diet may help reduce the acid load in the body, which in turn, may reduce risk of cancer and other illnesses.

"You can use ash because it has calcium and other alkaline similar to lime, and that's what I tried to teach our community, that there's science behind our cooking," Tom said.

Tom said he prefers cedar ash when cooking. For these projects, he would take a branch of cedar and burn it in the grill outside his house and collect the ash.

Tom became the first to earn a bachelor of science in biology from Navajo Tech in May.

His last semester at NTU was challenged by covid-19 pandemic restrictions. He enrolled in hybrid courses, taking some online and some in person, and he spent most of his time at the biology lab, where students worked on projects ranging from growing bacteria in controlled environments to researching wetlands.

During those early months of the pandemic, Tom thought about covid-19 virus mutations and worried about Navajo communities where families lack running water. But the pandemic was also an opportunity for biology students to study a new virus and in real time.

"My professor and I were looking for articles," he said. "The genome of the SARS was just coming out, and what was really exciting is that I was taking an infomax course, and while I was learning the subject, this became a real time case to learn."

When Tom graduated, he watched the online graduation program from a computer at the biology lab. At home in Little Water, the internet is still set up the old way: dial-up. It's slow and unable to stream in real time.

"You can't do a Zoom call," he said. "We are in a geological position where all radio frequencies go over us."

The research was paid for under the Army Research Laboratory and was accepted by the Journal of Power Sources.

Soundappan, the principal investigator for the National Science Foundation Partnerships for Research and Education in Materials project at Navajo Tech, said Tom secured a research opportunity at Harvard after graduation thanks to this program.

He said the PREM project was created to build pathways for undergraduate Native American students into science, technology, engineering and mathematic fields. It includes diverse perspectives and methods of scientific inquiry in research and education. Soundappan said Tom participated in the program every year, which made him the perfect candidate to transfer his knowledge and skillset to Boston.

"He's going to be a role model for this project," Soundappan said. "I plan on sending our students to Harvard for the next 10 years."

The NTU collaboration with Harvard has been ongoing since 2018.

Dr. Kathryn Hollar, the director of Community Programs and Diversity Outreach at Harvard's John A. Paulson School of Engineering and Applied Sciences, has been working with Tom for the past couple of years.

"It is such a privilege to be a part of his many successes," she said. "He is truly someone who leads by serving, and we feel so honored to have him here at Harvard. I have watched him mature over the past two years as a scientist through our partnership with NTU via funding from the NSF Division of Materials Research's Partnership for Research and Education in Materials (PREM program).

She also pointed to his work to create the student organization and his focus on the professional development of fellow students.

"Recently, he was also selected for the latest cohort of the American Indian Science and Engineering Society Lighting the Pathway program," she said. "I am just writing these accomplishments down, because I think he is a bit modest." 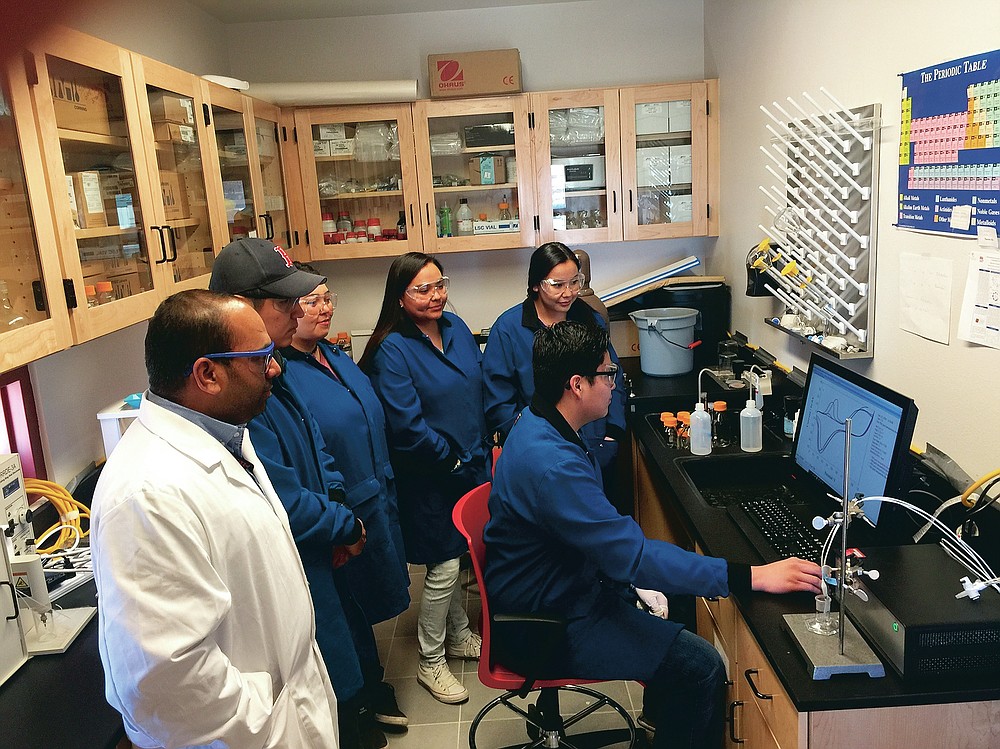