Hogs rolling along during recent run 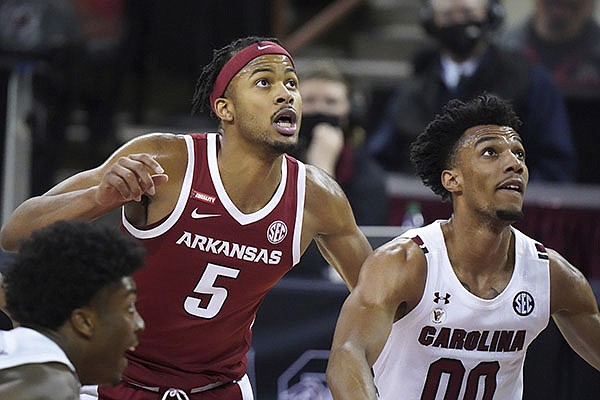 FAYETTEVILLE -- A finger on the pulse of Arkansas Razorback basketball fans -- taken through the real-time lens of social media platforms -- at about 8:30 p.m. on Jan. 20 might have resembled anger, frustration and full-scale panic.

The University of Arkansas was trailing Auburn at Walton Arena by the score of 37-18 after a Sharife Cooper three-point shot with 4:17 left in the first half. This was an Auburn team the Razorbacks had dispatched 97-85 on the road in their conference opener three weeks earlier, albeit with Cooper not available.

Down 19 after being blown out by 16 points at LSU and 31 at Alabama in their two previous games, the Razorbacks had reached a crossroads.

Lose to the youthful Tigers at home and fall to 2-5 in SEC play with a second home loss, following a 13-point setback to Missouri at Walton Arena. Or battle back from the major deficit and start finding answers for a sluggish offense that was struggling to score at the rim and a defense that was prone to giving up too many clean three-point looks and offensive rebounds.

Second-year Coach Eric Musselman said Thursday that the Walton Arena crowd played a role in lighting a fire under his team.

"They were energetic," he said. "We were kind of flat. We were discombobulated. Fragile. I'm sure the people on Twitter... you said there was no booing in the arena.

"I'm sure on Twitter, if you could boo on Twitter, there's zero doubt when we were down 19 against Auburn, people were booing on Twitter. I promise you that. Bud Walton, we heard nothing but positives."

The Razorbacks rallied to beat Auburn 75-73 and began improving on a game-by-game basis with healthy forward Justin Smith making his presence felt in offensive production, defensive cohesion and leadership.

Arkansas enters the final weekend of the regular season on a 10-game SEC winning streak, its longest since the NCAA championship team of 1994 reeled off 11 in a row to end the regular season and added another against Georgia at the SEC Tournament.

Arkansas outscored Auburn 29-10 in a stretch of less than 10 minutes to pull even at 47-47 on a Jalen Tate jump shot. The Razorbacks took the lead for good at 58-56 on a Moses Moody layup with 8:57 remaining.

They have hardly looked back since.

The Hogs won their next three SEC games at Vanderbilt and at home against Ole Miss and Mississippi State by an average of 17.3 points per game.

In the last of those games, Arkansas made just one of its first 17 shots, including a streak of 15 consecutive misses, and rallied from a 16-3 deficit to surge past the Bulldogs, 61-45.

Since that game, which followed three days after an 81-77 loss at Oklahoma State in the Big 12/SEC Challenge, it's been nothing but winning for Musselman and the Razorbacks, who have clinched the No. 2 seed behind SEC champion Alabama for the SEC Tournament next week.

Musselman dreamed up the phrase "Sharing the ball everybody feels stardom" on Thursday with the plan to impart that to his club, which has had seven different leading scorers during the SEC win streak.

"Everybody can have their day or their game if you share the ball," he said. "I think the reason we have had different leading scorers is we have shared the ball. We've tried to mix up our offensive sets.

The statistics from Arkansas' 10-game SEC winning streak paint a picture of a team with balanced scoring, improving defense and solid rebounding.

Moody has been the leading scorer four times during the streak, including three games of 20-plus points.

Smith has done it twice, while Desi Sills, JD Notae, Connor Vanover, Tate and Davonte Davis have done it once. Arkansas has had seven instances of a player scoring 20-plus points during the streak, topped by Moody's 28 against South Carolina, 26 at Vanderbilt and 24 against Alabama.

Additionally, Tate scored 25 at Vanderbilt, Sills went for 22 in the Auburn game, Smith scored 22 at South Carolina and Notae posted 21 against the Gamecocks.

Arkansas has won the rebounding battle in seven games during the streak, lost it twice (at Kentucky, at Missouri) and tied South Carolina 39-39 in its last game.

They have won games that resembled hand-to-hand combat in the paint, like their victory over Mississippi State in which the Hogs shot 35.9% from the floor to the Bulldogs' 30.6%.

Tate took a star turn in the closing seconds, grabbing the rebound off a Davis miss and drawing a shooting foul with 4 seconds remaining. Tate made both free throws to give Arkansas win No. 5 in the streak.

The Razorbacks also coughed up a five-point lead with 2:54 remaining in their next game at Missouri. Inside buckets by Mitchell Smith on an offensive rebound and Parker Braun, with 9 seconds left, allowed the Tigers to push the game into overtime. Davis gave Arkansas the lead for good at 82-81 with 35 seconds remaining, then Moody and Smith made two free throws each to ice the win.

Arkansas has road victories at Vanderbilt, Kentucky, Missouri and South Carolina during the streak, its first stretch of four consecutive SEC road wins since the 1995 team did it.

Then there's the Texas A&M saga. Arkansas has missed two scheduled games against the Aggies during their winning streak, though they are set to host them on Saturday.

A win against the Aggies and Arkansas will match the sizzling finish of the 1993-94 Razorbacks. The question will then become: Can they match that championship team's postseason success?