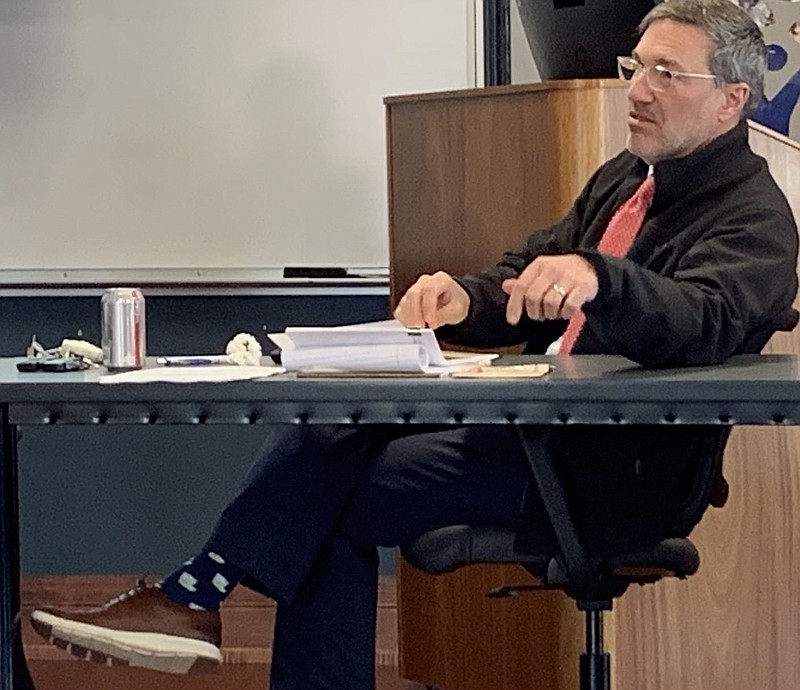 SPRINGDALE -- The School Board on Thursday discussed the potential for extending the maturation date of the district's more than $265 million in debt.

The board held a work session to discuss several administrative decisions facing the district.

The millage for the debt would be extended from 2041 to 2051, said Scott Beardsley, financial adviser for the district and president of First Security Finance.

Voter approval for the extension of the millage would generate about $90 million to help pay for several approved district development projects at Southwest and Central junior high schools, George Elementary and Springdale High, Beardsley said.

"It's not a tax increase," said Kelly Hayes, deputy superintendent. "We have to come up with our part to be able to do it."

The board must approve a bond application as the next step in the process to extend the millage in preparation for voter approval in the May 18 annual election, Beardsley said.

In other news, Shannon Tisher, assistant superintendent for eighth through 12th grade curriculum, instruction and innovation, shared the district's initial discussions for its commencement and proms.

Archer Learning Center is currently exploring having graduation for its 220 graduates at a to-be-determined time May 16 at Bulldog Stadium at Springdale High, she said. Graduates wouldn't be limited on the number of invited guests, she said.

Tyson School of Innovation is discussing having two ceremonies from 12-1 p.m. and from 2-3 p.m. on May 16 in the school's Performing Arts Center, Tisher said. Families would be limited to inviting six family members each, she said.

Springdale and Har-Ber high schools are discussing having multiple ceremonies on May 15 at Bud Walton Arena in Fayetteville, Tisher said.

Having a ceremony at Bud Walton may limit guest participation to six people per graduate, Tisher said. The arena also has covid-19 guidance in place preventing choir performances, would prohibit a traditional processional and would require students to exit the arena upon receiving their diplomas, among other restrictions, she said.

No decisions have been made on holding the ceremonies at the arena, Tisher said. The district is awaiting feedback on how covid-19 restrictions may be modified March 31, when Gov. Asa Hutchinson has announced the public health emergency in the state will end, she said.

All Springdale high schools will have a senior event of some kind May 1 in honor of prom, Tisher said.

The events will only be open to seniors, she said, and may resemble red carpet events.

Potential events may include students making timed appointments to walk a red carpet, do video interviews and participate in various activities spread out in a rotunda-like area, Tisher said. Students are apt to be able to make appointments at the same time as groups of friends to ensure the events remain social in nature, she said.

The board also explored the potential learning models for the 2021-22 school year.

Blended learning would be available to students in grades 11 and 12, who would take at least one class online, she said. Students would be accepted based on their application, program of study needs and availability of classes, she said.

The learning model wouldn't look like the blended model for this school year, through which students only attend school in-person on certain days, Smith said.

Remote learning would be limited to K-12 students learning from home based on leadership-approved situations, Smith said.

Five-day online learning would be offered to students enrolled at Tyson School of Innovation, she said.

Tyson School of Innovation serves students in grades 6-12, according to the school's website.

The board will vote on the learning models at the monthly board meeting Tuesday.

The next Springdale School Board meeting will be at 5 p.m. on Tuesday at 804 W. Johnson Ave.