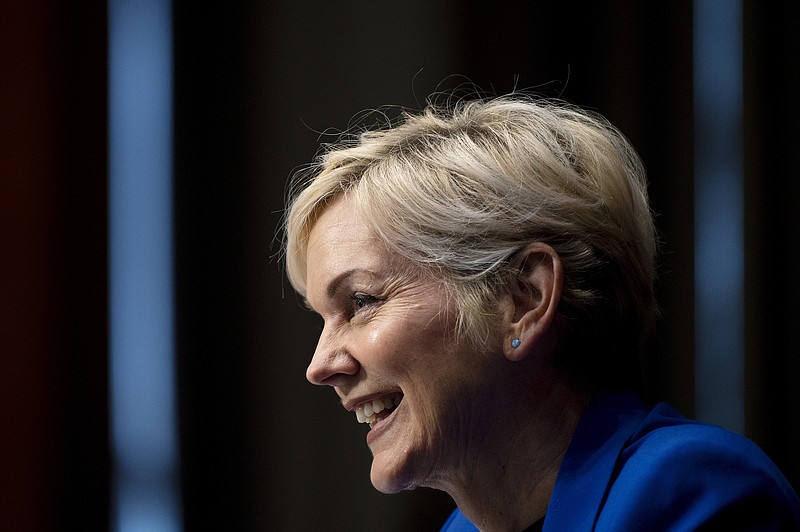 FILE - In this Jan. 27, 2021, file photo, Jennifer Granholm testifies before the Senate Energy and Natural Resources Committee during a hearing to examine her nomination to be Secretary of Energy on Capitol Hill in Washington. The Biden administration is reviving an Energy Department program that dispersed billions of dollars in loan guarantees to companies such as electric car maker Tesla and the failed solar company Solyndra. In an interview with The Associated Press, Energy Secretary Jennifer Granholm says that up to $40 billion in guarantees will be made available for a variety of clean-energy projects. (Jim Watson/Pool via AP, File)

WASHINGTON -- As part of its clean-energy agenda, the Biden administration is reviving an Energy Department program that disbursed billions of dollars in loan guarantees to companies such as electric car maker Tesla and the failed solar company Solyndra, Energy Secretary Jennifer Granholm says.

The program aided Tesla's efforts to become a behemoth in electric cars, but it stumbled with a major loan guarantee to Solyndra, the California solar company that failed soon after receiving federal money a decade ago, costing taxpayers more than $500 million.

Republicans and other critics cite Solyndra as an example of wasteful spending under President Barack Obama's stimulus program, and the loan guarantees have largely dried up in recent years. The Energy Department provided $12 billion in guarantees for the Vogtle nuclear power station in Georgia, but few other loans were offered under Trump.

That's about to change, Granholm says.

In an interview with The Associated Press, Granholm said up to $40 billion in guarantees will be made available for a variety of clean-energy projects, including wind, solar and hydro power, advanced vehicles, geothermal and even nuclear.

"It's got to be clean. That's it," she said. "And when I say clean, you know, it's technologies that are being researched in the lab," like projects to capture and store carbon dioxide emissions, so-called green hydrogen fuel and other energy sources, she said.

The program will be overseen by Jigar Shah, a longtime clean-energy entrepreneur who helped pioneer solar power in the U.S.

While Republicans are likely to focus on avoiding a repeat of Solyndra, Granholm, a former Michigan governor, said Tesla is a better example. The company's founder, Elon Musk, repaid the loan in full years ahead of schedule and Tesla is now one of the world's leading makers of electric cars and battery storage.

"I mean, obviously that was two administrations ago," she said, referring to Solyndra, which went bankrupt in 2011. "We've learned a lot since then. People understand that when you invest in technology that is new, you're going to have some that don't succeed."

Still, the loan program overall has returned more than $500 million to taxpayers, "people paying back their loans with interest," Granholm said.

Granholm called herself a "huge fan" of Shah, who co-hosts an energy podcast and advises investors on low-carbon projects. "I'm very excited about his leadership and about actually using the DOE loan program again," she said.

On other topics, Granholm said she thinks electric utilities can reach President Joe Biden's goal of 100% clean electricity by 2035. The head of a utility lobbying group said last month that the 2035 date would be "an incredibly difficult situation to handle" for most U.S. electricity providers.

Getting to 80% or 90% of clean electricity is "doable," she said. "And the last bit is going to be harder, but we have to do it." The good news is that companies have time to make the transition and improve the technology needed to produce clean power at a larger scale, she said.

Granholm also pledged that the Energy Department would be part of Biden's commitment to environmental justice. Shalanda Baker, deputy director for energy justice and Granholm's equity adviser, will lead the effort, targeting disadvantaged communities that have lost jobs in coal mines or power plants or are located near refineries, incinerators or other hazards.

Biden has pledged that 40% of the benefits of clean-energy investments will go to disadvantaged communities, "so that they are not forgotten, not unseen," Granholm said.

Granholm, who took office Feb. 25 after being confirmed by the Senate, said her first week on the job "has been an amazing, under-the-fire-hose learning experience."

Like previous energy secretaries, Granholm said she has been impressed by the agency's breadth and scope, as well as the intricate research and sheer number of scientists with doctoral degrees at the department's 17 national laboratories. The Energy Department oversees the nation's nuclear stockpile, among other responsibilities.

Granholm said she plans to visit "every one" of the 17 labs, which stretch from New York to California and conduct cutting-edge research on a range of scientific and nuclear issues.

The labs are also studying technologies that can protect against future pandemics. 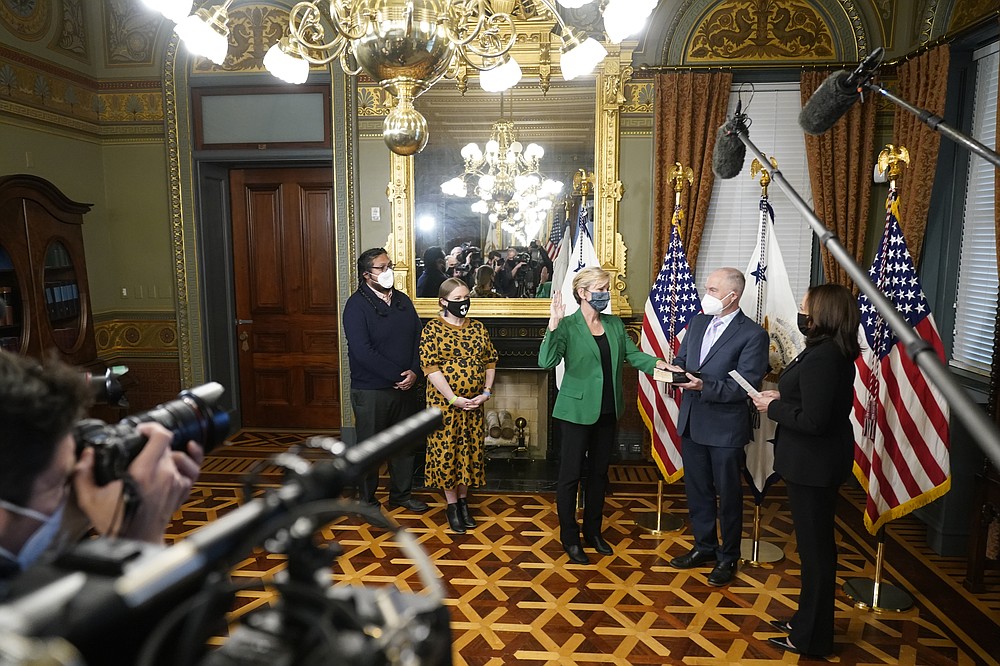 FILE - In this Feb. 25, 2021, file photo, Jennifer Granholm is sworn in as Energy Secretary by Vice President Kamala Harris, as her husband Dan Mulhern holds the Bible, in the Eisenhower Executive Office Building in the White House complex in Washington. Granholm's daughter Cecelia Mulhern and son-in-law Damian Roberto Mendieta, watch. The Biden administration is reviving an Energy Department program that dispersed billions of dollars in loan guarantees to companies such as electric car maker Tesla and the failed solar company Solyndra. In an interview with The Associated Press, Energy Secretary Jennifer Granholm says that up to $40 billion in guarantees will be made available for a variety of clean-energy projects. (AP Photo/Andrew Harnik, File)
ADVERTISEMENT