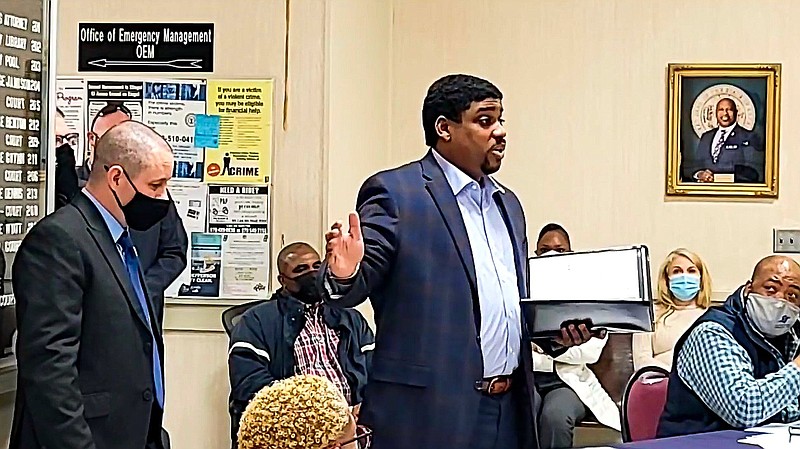 An unresolved matter of unpaid wages was brought to the attention of the Jefferson County justices of the peace during the Public Safety Committee meeting on Tuesday, revealing the fact that a county employee had worked for a month and still had not been paid.

Originally on the agenda was a vote to fill multiple slots at the Detention and Juvenile Justice facility requested by Sheriff Lafayette Woods Jr., but during the meeting, those items were pulled by acting chairman Justice Ted Hardin because Dr. Conley Byrd was absent.

Woods still insisted on addressing the matter because one of his employees, Hunter Glover, had not received payment for the pay period of Feb. 26.

According to the County Clerks Office, because Glover was hired on Feb. 1, 2/1/2021 in slot 11-1 from fund 1813 for the Detention Maintenance Position, they were unable to proceed in payment.

"Right now, he's not an employee because there is a hiring freeze in effect and he doesn't meet those criteria," said County Judge Gerald Robinson during Tuesday's Quorum Court meeting. "This was done prior to bringing it to the Quorum Court."

In a follow-up interview with Robinson on Wednesday, the county judge said Woods, because of a hiring freeze, was asking permission for several positions to be filled, but for one of the positions he was asking to fill, the person was already working.

"He actually put a person to work before he got permission from the Quorum Court," said Robinson.

The ordinance would apply to regular, temporary, and acting positions of county employment except for the chief administrators of the circuit and district courts; commissioned law enforcement positions within the sheriff's office; custody and corrections officers within the sheriff's office; juvenile intake, probations and corrections officer positions at the Jack Jones Juvenile Detention Center, any position funded entirely by one or more grants; and temporary positions.

A clause in the ordinance states that the Quorum Court may, by motion, make an exemption if it is necessary for the performance of critical health or safety function, the satisfaction of a legal mandate, or necessary for the efficient and cost-efficient operation of the county.

According to the ordinances, any county elected official or court administrator can request the Quorum Court exemption in writing for the county judge to process the request promptly, but according to Robinson, the protocol was not followed in the correct order laid out in the ordinance.

"There is a hiring freeze in place that if someone is hired they have to come through the Quorum Court before that is done. That has not happened," said Robinson. "It was put on the agenda. A letter was brought to the judge's office to address this, but we found out this person has already been working since Feb 1. This was done without the permission of the Quorum Court."

According to Woods, Glover was presented a "bona fide offer of county employment" for the year 2021 and accepted December 4, 2020, knowing hiring freeze Ordinance No. 2020-7 would sunset at the end of 2020.

"The new ordinance extending the freeze bore the same Article III contents concerning bona fide offers," said Woods. "As such, those party to the employment filling the building maintenance slot are confident the offer of employment was made not only in good faith but in accordance with the ordinances."

According to Robinson, proper protocol was not followed in the hiring process, and at the advice of legal counsel, those items on the agenda needed to be pulled due to the hiring freeze ordinance.

"There may be some legalities with the ordinance not being adhered to," said Robinson, who added that the Quorum Court could address the matter at a later time but not during the meeting since the item was not on the agenda.

Woods, on the other hand, said he wanted the matter addressed as soon as possible, stating his jail administrator has given Glover funds from his own pocket to sustain him until the matter is resolved.

In a follow-up interview with the Pine Bluff Commercial on Wednesday, Woods explained that in September 2020, the employee occupying the building maintenance slot for the jail left, but the slot was filled internally by transfer.

According to Woods, in November of 2020, the maintenance supervisor for the jail and Juvenile Justice Center announced he was going to retire at the end of the year.

"Neither was a position exempted in Ordinance No. 2020-7," said Woods.

"This man has worked for a month. He is entitled to get paid," said Woods. "He was hired based on the bona fide offer of employment prior to the enactment of the second ordinance intention for 2021."

Woods said Glover was hired before Woods requested those additional slots to be added that were removed from the agenda. Woods also said an approved budget included appropriations for his salary as his position was not a new one.

"I have to make sure that the ordinances are followed to the letter. I can't deviate from that," said Robinson. "The ordinance spells it out plain. I'm doing what I'm required to do. I have to do what's right."

Woods said litigation is expected to follow if the matter is not resolved, but Robinson said this issue falls back on Woods.