Chamblee and Jointer pledge to Hogs 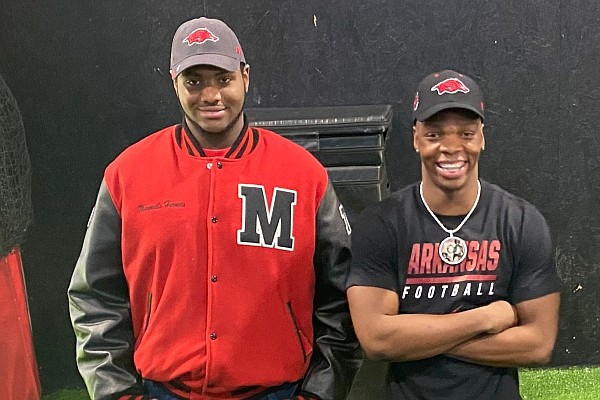 Chamblee, 6-5, 290 pounds, had named a top seven of Arkansas, Florida, Penn State, Auburn, Tennessee, Ole Miss and Michigan State as his finalists before pledging to the Razorbacks.

“Definitely the decision I made was based off of the coaches, my family and them making it feel like home,” Chamblee said.

ESPN rates Chamblee a 4-star prospect, the No. 30 offensive tackle and the No. 220 overall prospect in the nation for the 2022 class. His relationships with Pittman and offensive line coach Brad Davis won him over.

“Just the bond we’ve built over the last four months,” Chamblee said. “The love from Coach Davis and the energy that he brings, and I love Coach Pittman. I just love the atmosphere.”

Davis and Pittman’s reputations as offensive line coaches helped them connect with Chamblee.

“They’re matching the same energy that I have knowing that if I go up there they’re going to treat me well because of the position they coach,” he said.

He and his parents, Jonathan and Sheri, did a virtual visit with Arkansas on Jan. 23 and that got him thinking it’s time to be a Razorback.

“I would say a little bit after the junior day I was definitely thinking ‘Yeah, this is the place,’” said Chamblee, whose mother is a big Arkansas fan.

He and Jointer announced their commitments together at gathering in Little Rock.

“It was great knowing that another one of my brothers is going up to The Hill,” Chamblee said. “We’re going to do big things.”

Chamblee is one of two in-state offensive line prospects with offers from the Razorbacks. Joe T. Robinson’s E'Marion Harris is the other.

“It was like love at first sight when I first got on campus like a month after the new staff was announced,” Jointer said. “They knew who I was as soon as I got on campus. They were with me and my family throughout the whole visit.”

He rushed 162 times for 1,105 yards, 10 touchdowns and had 8 catches for 135 yards and a touchdown as a junior after missing most of his sophomore season because of an ACL injury.

Running backs coach Jimmy Smith recruited him the hardest out of all the other coaches at contending schools.

“I talked to Coach Smith like three times a day on FaceTime or through text,” Jointer said. “Hearing a person through face-to-face on the phone is different than text. That meant a lot to me. He recruited my family as well.

“I have faith in Coach Pittman. I just feel like Arkansas was the best fit for me.”

National recruiting analyst Tom Lemming of CBS Sports Network rates Jointer a 3-star-plus prospect. Being able to play for his home state and have his beloved mother, Landa Burns, in the stands made his decision easier.

“With her being able to make my games, that’s everything,” he said. “For me to be able to stay and play for the state of Arkansas, that’s our NFL team. That’s pretty big. That’s a big blessing.”

He and Chamblee now give Arkansas six commitments for the 2022 class. Chamblee joins Eli Henderson as offensive linemen in the class, while Jointer joins Rashod Dubinion as running back pledges.

Oral commitments are not binding.