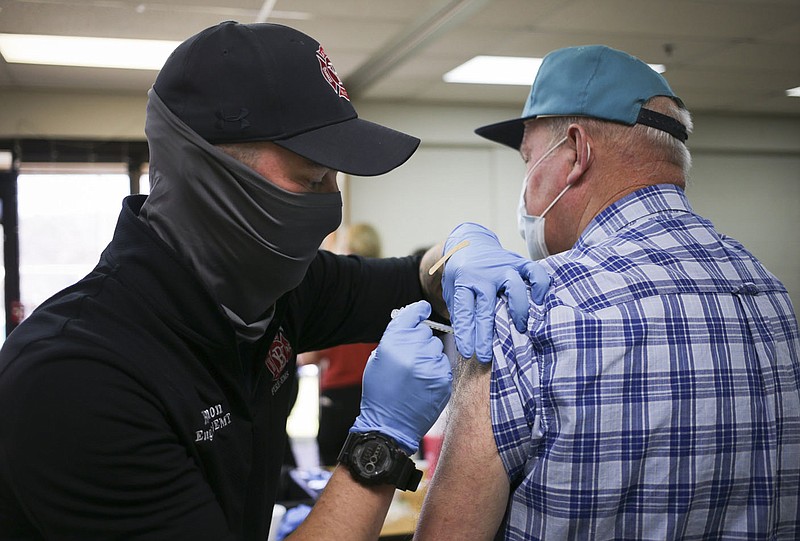 Bella Vista Fire EMS Chaz Harmon (from left) administers a vaccine to Kevin Fields of Bella Vista, Thursday, March 4, 2021 at Riordan Hall in Bella Vista. The Bella Vista Fire Department with the help of volunteers held a vaccine clinic for people in Phase 1-B. They planned 1,200 first doses for the one-day event. Check out nwaonline.com/210305Daily/ for today's photo gallery. (NWA Democrat-Gazette/Charlie Kaijo)

More Northwest Arkansas residents are getting vaccinated against covid-19 as more health care organizations offer appointments and mass clinics for the community.

Benton and Washington counties had 29,915 residents fully vaccinated against covid-19 as of Thursday, while another 54,730 had received the first of two doses, according to the Arkansas Department of Health.

The two counties have a combined population of 384,234 residents 16 and older, so about 7.7% of that group have been fully vaccinated while about 14.2% are halfway there.

Pfizer and Moderna vaccines require two doses. The federal government approved the J&J Janssen vaccine last week and it requires only one dose. The Janssen is about 66% effective against covid-19 compared to Pfizer's 95% effectiveness and Moderna's 94% effectiveness, according to the federal Centers for Disease Control and Prevention.

Community Clinic, which has several medical clinics throughout the region, will likely receive its first shipment of vaccines this week, said Judd Semingson, chief executive officer of Community Clinic.

Semingson expects to receive about 300 doses a week at first and for that to eventually increase. The plan is to offer the vaccines by appointment only and not have wait-lists. Community Clinic will follow the state's phased plan and offer vaccines to anyone in groups deemed eligible by the state. Vaccines will at first be offered at the medical clinic on Emma Avenue in Springdale and eventually at other clinics in the region, Semingson said.

Community Clinic expects to receive Moderna vaccines but also has the capability to store the Pfizer vaccine, which must be frozen, he said.

More than 1,300 people received their first doses of the vaccine during an event Thursday at the Bella Vista Fire Department, according to a news release from the city. The event targeted Bella Vista residents but was open to anyone eligible.

About 706,700 doses had been given in Arkansas as of Friday, according to the state Health Department. The data includes first and second doses.

Washington Regional Medical System had given 14,044 doses, including 8,332 first doses and 5,712 second doses, through the end of the day Thursday, according to Natalie Hardin, spokeswoman.

School districts in the region began vaccinating employees about six weeks ago.

Fayetteville Public Schools has 80%, or 1,168, of its estimated 1,460 employees fully vaccinated, said Alan Wilbourn, spokesman. The district expects that to increase over the next week.

The Springdale School District has at least 1,963 employees who have received a vaccine, according to Trent Jones, spokesman for the district. At least 1,425 employees are fully vaccinated. The district employs 2,952 people and doesn't track how many employees may have received vaccines elsewhere.

A total of 992 Rogers Public Schools employees had received at least their first dose through the district's vaccination events as of Feb. 26 with nearly 400 employees fully vaccinated, according to Ashley Siwiec, spokeswoman for the district. Siwiec said Friday morning more employees were expected to be vaccinated throughout Friday and Saturday. The district has 2,063 employees and doesn't track how many employees may have received vaccines elsewhere.

Bentonville Public Schools employees had received 1,310 first doses and 602 second doses as of Feb. 26, according to Janet Schwanhausser, deputy superintendent. The district's next vaccination event is scheduled Friday. The district employs 2,364 people.

The Bentonville School District had 37 active cases as of Thursday, according to the Health Department. Rogers had 18 active cases, and Springdale had 25. Fayetteville had 10 active cases. Active cases are those that have not recovered or died.

Hospitals in Northwest Arkansas had a total of 26 patients in their covid-19 units as of Tuesday, according to a joint statement from the region's largest health care organizations via Martine Pollard, spokeswoman for Mercy Health System. The record for most hospitalizations in the region on a single day was 140 patients Jan. 8. 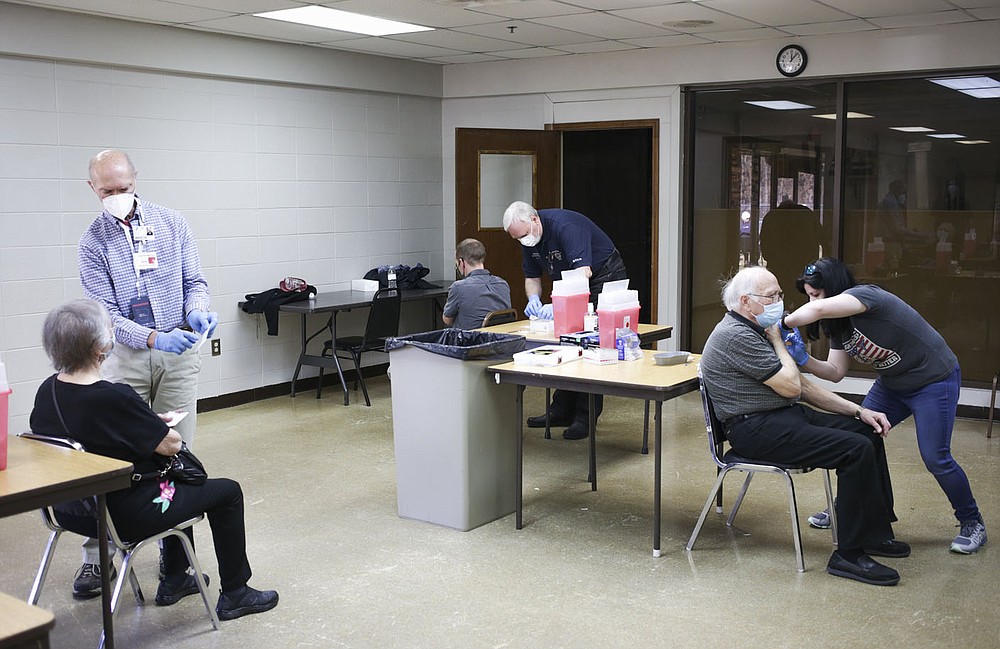 Volunteers administers covid-19 vaccines to people, Thursday, March 4, 2021 at Riordan Hall in Bella Vista. The Bella Vista Fire Department with the help of volunteers held a vaccine clinic for people in Phase 1-B. They planned 1,200 first doses for the one-day event. Check out nwaonline.com/210305Daily/ for today's photo gallery. (NWA Democrat-Gazette/Charlie Kaijo) 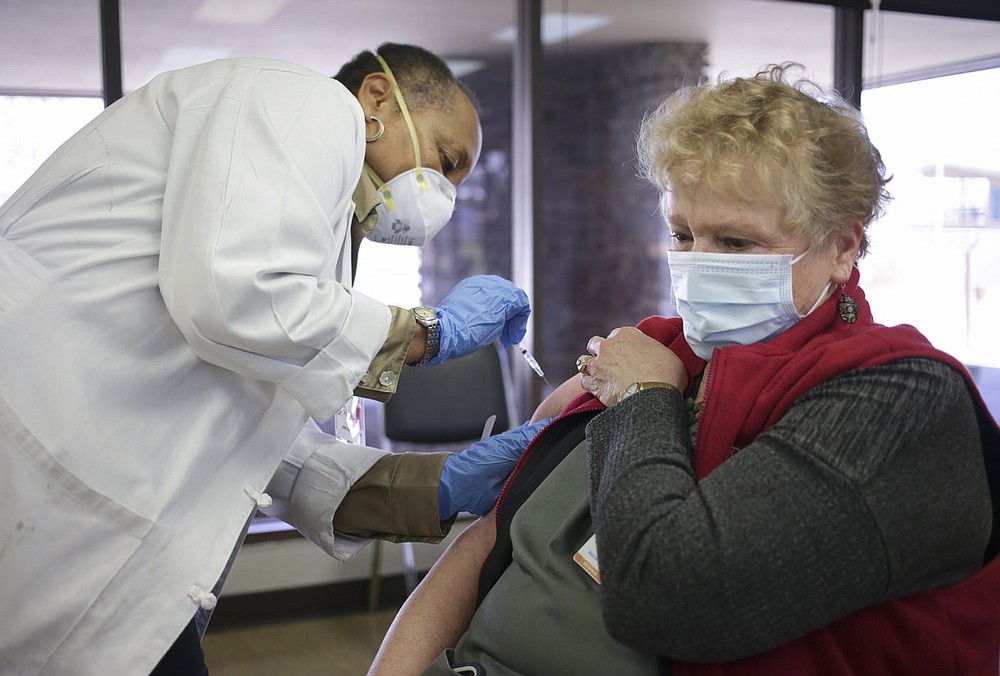 Dr. Glenda Patterson (from left) administers a covid-19 vaccine to Care Butler of Bella Vista, Thursday, March 4, 2021 at Riordan Hall in Bella Vista. The Bella Vista Fire Department with the help of volunteers held a vaccine clinic for people in Phase 1-B. They planned 1,200 first doses for the one-day event.(NWA Democrat-Gazette/Charlie Kaijo) 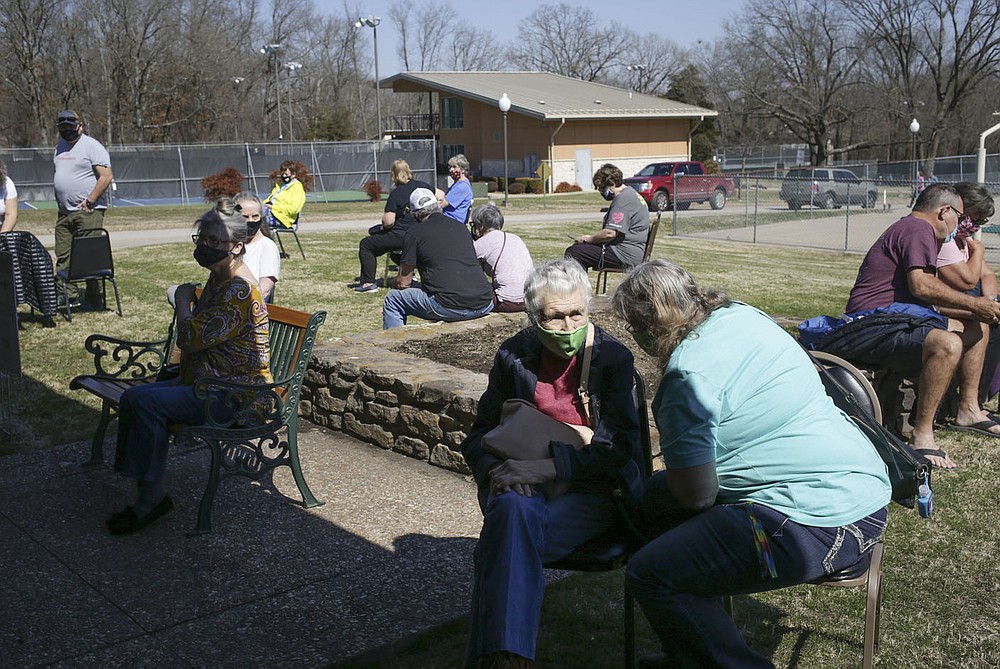 People wait outside after receiving their covid-19 vaccines, Thursday, March 4, 2021 at Riordan Hall in Bella Vista. Vaccine recipients wait 15 minutes at the administration site after receiving their vaccines in the event of an adverse reaction. The Bella Vista Fire Department with the help of volunteers held a vaccine clinic for people in Phase 1-B. They planned 1,200 first doses for the one-day event. Check out nwaonline.com/210305Daily/ for today's photo gallery. (NWA Democrat-Gazette/Charlie Kaijo)
More News

Covid-19 vaccines are available at the following places in Northwest Arkansas: