A proposed route across north Pulaski County, connecting Interstate 40 and U.S. 67/167 and points in between, will be much farther south than originally envisioned if it's built, according to the latest results of an ongoing study.

During an Arkansas Department of Transportation virtual public hearing, people will have an opportunity through March 21 to view and offer their input on the four primary alternatives that planners have identified.

The study consultants -- Michael Baker International, which has a Little Rock office, and ATG Alliance Transportation Group of Austin -- also have identified a secondary alternative, which they said didn't meet the purpose and need of the study but "appeared to provide significant benefits at low incremental cost."

A website has been created to allow people to view project materials and handouts that would have been available at an in-person meeting. It also has an option to send online comment forms to the department staff, or the form may be printed and mailed to the department's transportation and policy division at 10324 Interstate 30, Little Rock, Ark. 72209 to the attention of Daniel Bryam, the project manager.

People without online access can contact the division at (501) 569-2201 to ask questions about the proposed project and learn how to access project information, or email Daniel.Byram@ardot.gov.

The project is an outgrowth of the 2014 collapse of the effort to build the North Belt Freeway, which at $638 million was deemed too expensive to build for the traffic it would handle.

The purpose of the route is to reduce travel time between destinations in north Pulaski County, relieve congestion on Arkansas 107 and other north-south routes in the area, and add improved route connections to promote growth and development, according to the study materials.

Planners soon began looking at cheaper options that could use the existing road network with some improvements. Initially, they focused on an alignment that generally followed Arkansas 89 between Cabot in Lonoke County and Mayflower in Faulkner County.

They were among almost two dozen alternatives the consultants screened using a variety of performance measures, including modeling to access how much traffic would use them. Only the four primary alternatives and the one secondary alternative were found to have the "highest potential value."

All four primary alternatives cross Pulaski County from the east starting at Arkansas 440, which is on the south side of Jacksonville.

Primarily, "they didn't attract the volume of traffic" that would justify their cost, he said.

Maps of all four primary alternatives are available on the study website. They include the length in miles, how many miles of new construction are required, how many miles need to be widened and how much of the roadway is elevated.

For instance, Alternative A is 14.01 miles long, requires 9.5 miles of new construction and 4.5 miles of widening. Almost 8.5 miles of the route is elevated, particularly the part going through Camp Robinson.

Elevated roadway, often required when building roads in environmentally sensitive areas, are more costly than roads that aren't elevated. Studies typically look 30 years into the future since it often takes years to build the projects under study.

Traffic on Alternative A peaks at 20,000 vehicles daily by 2050 near The White Oak Crossing, the new I-40 interchange for Maumelle.

By contrast, Alternative D, a 13.4-mile route that also starts at Arkansas 440 but skirts south of Camp Robinson and reaches I-40 at Crystal Hill Road, requires 6.5 miles of new construction, 4.3 miles of widening and 3.5 miles of elevated roadway.

It uses elements of Maryland Avenue, Remount Road, Donovan Briley Boulevard as well as Crystal Hill Road. Its traffic counts range up to 31,000 vehicles per day by 2050.

The secondary alternative adopts much of Alternate D on the west, but starts from U.S. 67/167 at Kiehl Avenue and uses the thoroughfare to Arkansas 107. The 9.5-mile route requires 3.5 miles of new construction, 3.1 miles of widening and a half-mile of elevated roadway.

Covington and other planners are interested in seeing what options the public favors.

"A big consideration, obviously, is whether it extends across Camp Robinson or whether it goes south of the military facility," he said. "I would not say at this point that any alternate is favored over another." 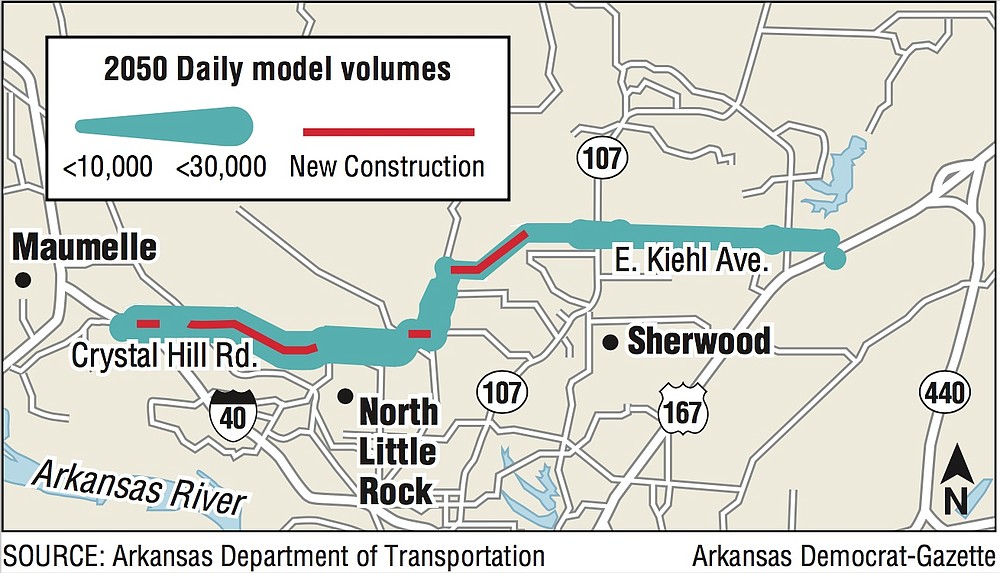