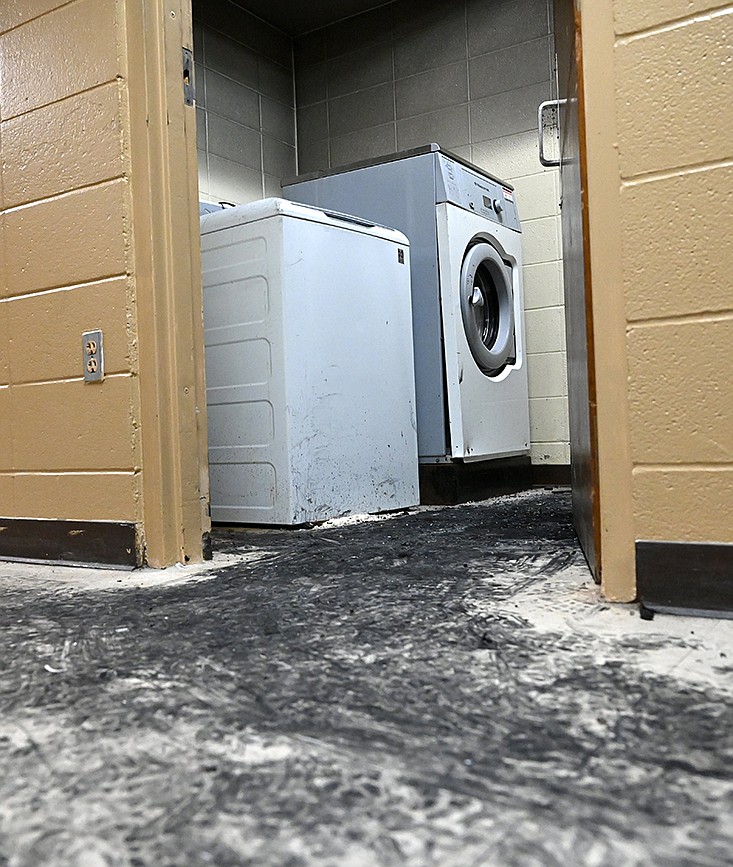 People staying at the Salvation Army shelter in Little Rock needed to be moved to other shelters after a fire broke out in the laundry room Thursday evening. The facility has not set a date to reopen for overnight stays. (Arkansas Democrat-Gazette/Stephen Swofford)

A fire at the Salvation Army shelter in Little Rock displaced 15 people, including children, and left uncertain when the facility can reopen for overnight guests.

Maj. Stephanie Mockabee said that the fire Thursday evening was contained to the laundry room, but the large amount of soot forced out the residents.

"There's too much soot damage," said Mockabee, of the Central Arkansas Area Command. "There's soot everywhere, and we definitely need to make sure that the safety of our clients and residents remain our concern as it was [Thursday], too."

The Little Rock Fire Department responded to the blaze in a laundry room at the shelter at 1111 W. Markham St. and promptly put it out, according to fire Capt. Jacob Lear-Sadowsky. There were no reports of injuries.

The Fire Department estimates $2,500 in damage, including an industrial gas dryer, the clothes inside and minor damage to two other dryers, said Lear-Sadowsky, but the blaze and the items burned produced a large amount of smoke.

"The gas dryer itself was on fire as well as the clothes inside of it," Lear-Sadowsky said. "That filled the building with quite a bit of smoke that we spent some time after the fire was out clearing with ... fans."

Mockabee said the shelter will not be able to open its doors for a few days, making the 12 spaces for women and three spaces for families unusable in the short term. The dryer also is a big loss.

"Even if we're able to get everything clean and the building is deemed safe, the construction in that room where the fire was contained is going to take a little time," Mockabee said. "And of course, we want to open our doors as soon as we get the clear that it's safe to do so."

The Salvation Army arranged for housing for the people at the shelter at the time of the fire -- including a mom and her toddler son, and a woman with disabilities who is cared for by her adult son -- and will continue to work with the residents as the building is repaired, Mockabee said.

"We're really just working hard to continue to do the case management for our clients who have been staying with us," Mockabee said. "There's 15 people, that includes the children, that were staying with us, and so our department is working very hard to continue that contact with them and ensure they have a secure, safe place to stay until we get our doors back open."

Other services, such as the average 67 hot breakfasts served to the public and shelter residents, have been affected because the gas was cut off, Mockabee said. The Salvation Army was able to be creative Friday morning by serving microwaved items for breakfast.

"Our gas has been put back on so we will be able to continue on with serving hot meals for breakfast," Mockabee said. "We weren't really sure if that was going to happen either because we couldn't get anyone to come out."

Many of the services the Salvation Army called were tied up elsewhere with recovery work from the winter storms two weeks ago, Mocakabee said.

"Everyone's just so busy from the storms still," Mockabee said. "Thankfully, we had a company come out. They were able to get our gas turned back on. We're thankfully able to continue our hot meals [today]."

The Salvation Army is seeking twin XL linens, new pillows and new towels to fill immediate needs, said Mockabee, as the shelter is down a dryer from the fire.

Anyone interested in donating can drop off items in person or donate money over the phone or on the donation page on the Central Arkansas Area Command website.

"Those new items will definitely be helpful in ensuring we can open our doors quickly," Mockabee said.