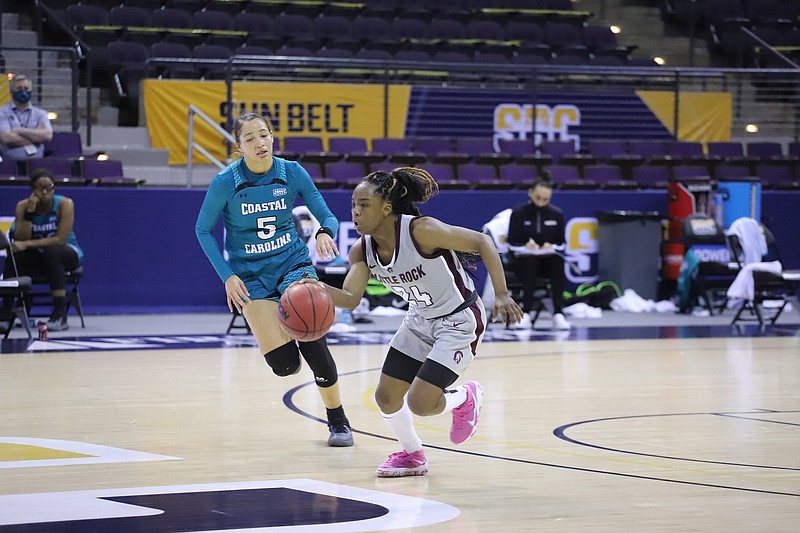 UALR guard Mayra Caicedo (right) dribbles the ball Friday while being defended by Coastal Carolina guard Deaja Richardson during the Trojans’ 75-64 victory over the Chanticleers in the first round of the Sun Belt Conference Tournament in Pensacola, Fla. (Photo courtesy UALR Athletics)

The University of Arkansas at Little Rock women's basketball season was on the brinks Friday when senior Krystan Vornes tore an ACL just 4:24 into the team's first game of the Sun Belt Tournament.

Then the Trojans trailed Coastal Carolina by 12 at halftime at the Pensacola Bay Center in Pensacola, Fla., but they were determined not to go home.

UALR held the Chanticleers to 17 points in the second half, storming from behind for a 75-64 victory to secure a second-round meeting with Georgia State at 2 p.m. Central today.

"I told the team [at halftime] that we've scored more than we have in the last week and a half," Coach Joe Foley said. "We're moving the ball well and we're shooting a lot better. If we get to doing what we normally do on defense, we'll have a shot. Just keep working and they did. They stuck with it."

A little later in the day, Arkansas State University's season ended with a 73-64 loss to South Alabama.

The West Division No. 3 seed Trojans (14-10) fell behind by as many as 14 points before scoring 40 second-half points to win their 15th consecutive first-round Sun Belt game. Senior Teal Battle scored a team-high 17 points, and junior Mayra Caicedo made 3 three-pointers and dished out 9 assists.

UALR completed the comeback without Vornes, who exited with 5:36 remaining in the first quarter. She will miss the remainder of the season.

Sophomore Angelique Francis replaced the injured forward and notched her first career double-double with 11 points and a career-best 12 rebounds. The Trojans received 23 points from the bench, including eight from freshman MeKayla Holley.

"It's next man up," Foley said. "It's kind of what we've been doing all year. We've just got to keep it going."

The Chanticleers blazed ahead with a 26-point second quarter while going 5 of 6 from three-point range. Graduate transfer Olivia Smith scored 11 of her game-high 18 points in the period. Her jumper with 1:18 remaining gave Coastal Carolina a 47-33 lead, the largest of the game.

UALR opened the second half with a 16-5 run and led 53-52 with 2:02 to play in the third quarter on a three-pointer from sophomore Ky'lie Scott (13 points) before the Chanticleers regained a 56-54 advantage.

The Trojans grabbed the lead for good on Battle's layup with 6:46 remaining in the fourth quarter, part of a 12-2 UALR run during which Coastal Carolina went 5:06 with a field goal. Holley's baseline jumper put the Trojans ahead 68-59 with 2:51 remaining.

UALR allowed the Chanticleers just eight fourth-quarter points and held Coastal Carolina to 24% shooting in the second half, fueling its offense with 16 points off of 12 forced turnovers.

"Little Rock is a tough and strong defensive team," Chanticleers Coach Jaida Williams said. "We knew that in the second half the intensity was going to pick up, and they did a great job of making us uncomfortable."

The West Division No. 5 seed Arkansas State fell in its first-round matchup against East Division No. 4 seed South Alabama at Pensacola State College.

Junior Karolina Szydlowska scored a team-high 16 points and drew the Red Wolves (9-12) within three points before ASU went scoreless for the final 2:06. Senior Peyton Martin and junior Jada Stinson finished with 12 points each, but the Red Wolves fell short while shooting 26.3% from the field in the final quarter.

ASU trailed 20-5 at the end of the first quarter. The Red Wolves turned six South Alabama (13-12) turnovers into nine points in the second quarter and outscored the Jaguars 20-11 in the period to go into the half down 31-25.

South Alabama's lead grew to 11 in the third quarter before ASU cut into the gap with a 7-3 run, and the Red Wolves entered the fourth quarter down 54-49 after Szydlowska beat the buzzer with a half-court heave.

Szydlowska went 3 of 3 from three-point range, and her three-pointer cut the Jaguars' advantage to 67-64 with 2:06 to play. ASU missed its final five field goals while South Alabama closed on a 7-0 run.