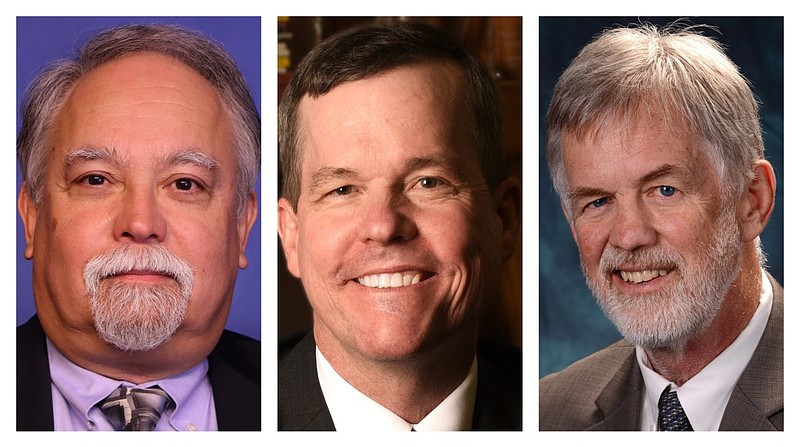 Twelve months into the coronavirus pandemic, the Arkansas Democrat-Gazette asked three current and former top health officials to reflect on a year of life-and-death challenges, share what frustrated them most and discuss what comes next.

All three are physicians. Romero and Wheeler are infectious-disease experts.

All three condemned the politicization of the crisis, which they said made it harder to control infections. A chaotic federal response, resistance from some state lawmakers and mistrust of the health system left people with questions, they said, which led to swaths of the public refusing to wear masks or take other protective measures.

“The impacts of the pandemic did not have to be as severe,” Patterson said. “I do think that we lost more lives because we were, in a sense, fighting a two-front battle — a battle against the virus and the battle against misinformation.”

The physicians spoke individually by phone. Their comments have been edited for clarity and brevity.

Q: Thinking back over the past year, what is the one thing that frustrated you most?

Romero: Probably the most frustrating aspect of this has been the lack of universal adoption of mask guidelines and the mitigation recommendations.

It’s gotten better, but these recommendations — the three, wash your hands, wear your mask, watch your distance — they’re physical means that are really not a burden on individuals, and that have a major impact.

There’s not been a robust acceptance of these, although I think they’ve gotten better, especially toward the end of the year and the beginning of this year, when it became evident that we were on the cusp of overwhelming the health care system.

Wheeler: There were real, clear choices that one would make from a science and epidemiological point of view that we just weren’t making as a state. I don’t blame that on any individual.

We had a strong culture that pre-existed the pandemic of lack of trust of health care, both public and private. Because [former President Donald Trump] was so inimical to the [federal Centers for Disease Control and Prevention] and public health officials and scientists in general, it just created a terrible perfect storm. Even if our health secretary and governor wanted to do some things, it would have been hard to do those things in the state.

It was clear we made choices in favor of economics instead of health. As a public health person, I think those were regrettable.

Patterson: It’s been challenging in many ways. At the beginning of the pandemic, we certainly couldn’t know what to expect, didn’t know how extensive it was going to be. We certainly didn’t imagine it would last as long as it did.

The biggest frustration for me is that this pandemic that has killed over half a million Americans became so highly politicized. It’s drastically impacted the course of the pandemic both here in Arkansas and across the nation, in very bad ways.

I trained during the initial phases of the HIV epidemic. While there were some political overtones to that, whether you were a Democrat or Republican didn’t determine whether you used condoms or not. That’s the circumstance that we are in with covid-19 now.

Q: With the benefit of hindsight — if we could start the response again, knowing what you know now — what would you have done differently?

Patterson: We would have done a lot more preparatory work. We — both UAMS and the health care system in Arkansas — reacted quickly to the problems that were thrown at us, but I think we could have done more to be prepared, to have certain plans in place.

We could have done a better job of getting in front of the court of public opinion with more education. Looking back, we should have been educating people about vaccines last fall, rather than waiting until the vaccines are here. … We’re a little bit playing catch-up ball because of that right now.

Romero: I’m not sure that we could have done something differently. It wasn’t our decision to shut the state down. That’s a governor’s decision that he needed to weigh in on, and he did.

Let’s take issues like a prolonged shutdown. … If you look back, look at California where it is today. Even though they shut down, they still have a major problem today.

I wish state representatives and senators had really championed the use of the masks, the use of mitigation. There were people that didn’t think of this as a major issue. We needed a more forceful endorsement of these mitigation measures.

Wheeler: We could have been much more active early on to contain the pandemic. When we really dropped our caseloads down to 50 a day or 60 a day, just for a very, very short period of time, that little dip after our initial surge, that was a great time to let the brakes off very slowly.

We did, but the consequences were that we started to see our case counts rise pretty quickly. In retrospect, that would have been a good time to develop a strategy for periodic lockdowns to contain our case numbers, and we didn’t do that. I think that’s unfortunate.

Q: Although the crisis isn’t over, when thinking about Arkansas’ response, what is something that stands out to you as successful?

Wheeler: The Marshall Islands community [in Arkansas] organized itself very quickly once they realized how badly covid-19 was affecting its workers in the poultry business and the community. … The same could be said about our Black communities, who had probably more reason to distrust the health care system than anybody in the U.S.

The people that were involved in the public health response were amazing. First-line workers in the hospitals and the emergency rooms performed sacrificially. I think the acquisition of knowledge about management of patients in the ICUs was as good as anywhere in the country.

[At the Health Department], we were always behind. We never caught up. But that wasn’t because of the people.

Patterson: We’re doing better than most states in terms of vaccine distribution — that is going smoothly and remains ahead of schedule.

It will get harder and harder as we move along to get to people who have poor access to care, who are resistant to being vaccinated. We’re going to have to work on that, and that’s going to be hard work. But so far I think the vaccine rollout in Arkansas has been better than expected.

Romero: The leadership has been ahead of the curve on many things, and I’m not afraid to admit it.

We’ve been under good leadership, I think, throughout this. We just needed more buy-in.

Q: What do you think the legacy of covid-19 will be? How will our lives change when the pandemic fades?

Patterson: Some things are not going to go back to the way they were before. The pandemic required us to push forward on things we wanted to do but maybe had not gotten around to. A good example of that is digital health services; I think we busted through the wall on digital health.

It’s likely that masks will reappear periodically, as we have other respiratory infections in place. It may be that some people choose to mask up every flu season, and that will be more socially acceptable.

Showing up to work with a fever or a cough or runny nose, that’s not happening again. That will be considered disrespectful, rather than valorous.

Wheeler: There’s a lot of things we don’t know about how people should behave. [For example], how much longer does it make sense to do masking and distancing?

Those are all questions that we don’t know the answer to, but we do know what the prudent answer is. … We need to continue to do everything we’re doing, until we’ve got the case count down to practically zero.

I think a lot of success we’ve seen since November, since the election, has been because there’s not been a focus from the White House on discouraging cooperation. We have made progress. The question now is whether we can maintain it going forward.

Romero: I hope that the legacy will be that, number one, we have a stronger public health system. We certainly have spent a good deal of our time in the last year building the infrastructure.

When this started, we had no capacity to do covid testing. Covid testing was sent to the CDC. In a matter of months, a public health laboratory here was built up to handle over 3,500 specimens a day, and it became, essentially, a small commercial laboratory.

Q: What should we do to prepare for similar events?

Patterson: I think the first thing we need to do as this covid-19 pandemic winds down, we need to do an assessment of what worked well. We certainly plan to do that at UAMS. I hope that we have similar efforts done at the state level. We can all put together better plans for next time we have to go through this drill.

Hopefully it will be less severe.

Wheeler: Pandemics are not state events. They’re regional, national or international events. I think there’s a limited amount our state can do, beyond what we need, which is a coordinated federal response.

[After the pandemic], there will be a lot of forgetting. In some ways that’s OK. I think the average person on the street ought to be able to forget. But those people in leadership, they are the ones. It is incumbent that memory be a major part of their job.

Romero: This won’t be the last one. You think about it, we’ve had three already this century. (Note: SARS, H1N1 and covid-19, the disease caused by the novel coronavirus.)

It’s easy to say “It’s gone, let’s take money away, let’s tear down the infrastructure we put up.” But we have to be vigilant. We have to realize that we are a very interconnected society, that what happens outside of the United States eventually will reach us, if it is a pandemic.

Even within the United States, the fact that we didn’t have cases early on — it wasn’t until March that we had our first case — it didn’t mean that we were safe.