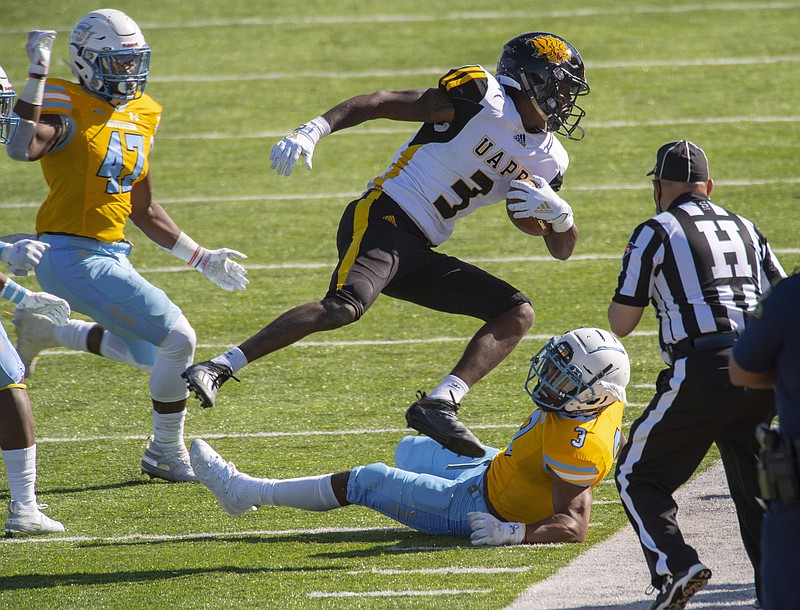 Southern University's Caleb Carter (47) and Tamaurice Smith (3) force Arkansas-Pine Bluff wide receiver Josh Wilkes (3), center, out of bounds after reception in the first half of the Jaguars' only scheduled home game of the spring season, Saturday, March 6, 2021 at A.W. Mumford Stadium. UAPB led 26-14 at the half. (The Advocate/Travis Spradling)

BATON ROUGE -- Long layoff, so what?

The University of Arkansas-Pine Bluff hadn't played a football game in nearly 16 months, but the Golden Lions looked anything but rusty Saturday against a team already coming off a win.

Skyler Perry accounted for four touchdowns and UAPB's defense picked off three passes in a 33-30 victory over Southern University to give Doc Gamble his first victory as a college head coach.

"Winning is fun. It's OK," Gamble said. "It makes the bus ride home a lot smoother. I don't know if I'll sleep any better because I have to prepare for the next game."

Gamble will have two weeks to prep for Grambling State on the road.

UAPB (1-0) hadn't played a game since Nov. 23, 2019, because the Southwestern Athletic Conference postponed its 2020 season until the spring due to the coronavirus pandemic. The season was to begin Feb. 27 in Pine Bluff against Texas Southern -- UAPB's last opponent in 2019 -- but water pressure issues resulting from the Feb. 14-17 snowstorms led to the postponement of that game.

Even UAPB Chancellor Laurence Alexander hopped on the postgame Zoom conference to congratulate Gamble on the win.

"I'm impressed with the way the team battled through the pandemic, through winter weather and the water issues," Alexander said. "To go on the road and win a game against one of best teams in the SWAC, it's a great win."

Perry threw for two touchdowns and ran for two more before 7,541 at A.W. Mumford Stadium, just more than one-quarter of the seating capacity. Perry rushed 8 times for 58 yards and completed 22 of 37 passes for 223 yards and 2 touchdowns.

The Golden Lions staved off a comeback by the Jaguars, who trailed 33-14 with less than a minute remaining in the third quarter.

Interceptions by Keyvien Johnson, Shawn Steele and Jalon Thigpen helped UAPB control the time of possession 30:26 to 27:54, and Johnson's pick of a John Lampley pass with 46 seconds left that snuffed out the last-gasp effort.

Southern had 426 total yards, including 292 passing, while UAPB gained 411 yards.

The lead changed hands four times in the first half. UAPB got on the board with a 35-yard Zack Piwniczka field goal less than three minutes into the game.

Southern (2-1), which beat Alabama State 24-21 on Feb. 26 and was credited with a March 27 forfeit victory against Alcorn State already, was pinned inside its 5-yard line three times. The first time, Skelton helped the Jaguars string together a 98-yard, 15-play drive ending in a 24-yard Jarod Sims touchdown run.

Perry rushed 31 yards to put UAPB back in front, 10-7, early in the second quarter.

Southern replaced Skelton -- who completed 4 of 6 for 54 yards and ran 6 times for 21 yards -- with Lampley, who completed his first four passes, including a 33-yarder to tight end Ethan Howard and 5-yard touchdown pass to Montavious Gaines with 8:02 left before halftime. Skelton drew an unsportsmanlike penalty after shoving a defender to the ground on a third-down play.

"He just wasn't there," Southern Coach Dawson Odums said of Skelton. "I haven't talked with him. The decision running off the field just wasn't the kind of leadership we were expecting from the quarterback position."

UAPB inched within 14-12 after Isaiah Singleton blocked a punt out of Southern's end zone with 5:19 left.

That started the Golden Lions' upswing. Perry completed his next 11 attempts, throwing touchdown passes to Josh Wilkes (14 yards) and Harry Ballard III (3 yards) to put UAPB ahead 26-14 at halftime. Thigpen's interception on the opening series of the second half set up a 70-yard Golden Lions' drive that ended with Perry's 2-yard touchdown run.

All seemed well for the Golden Lions when Steele intercepted a Lampley pass into double coverage, but Southern started its rally with 56 seconds to go in the third quarter on a Cesar Barajas field goal.

Rahem Shorter fueled the surge with a punt block that Jemel Byrd took back at the 14:09 mark of the fourth for a touchdown, but Lampley threw incomplete on the two-point conversion.

The Jaguars got the ball back almost four minutes later after an 11-play Golden Lions' drive stalled, and Lampley went 7 for 8 on the next drive, connecting with Sims on a 9-yard touchdown with 7:12 remaining. Both teams traded punts until Southern got the ball back with 2:26 left on its own 5 and got to its own 41 before Lampley's heave went into Johnson's arms. 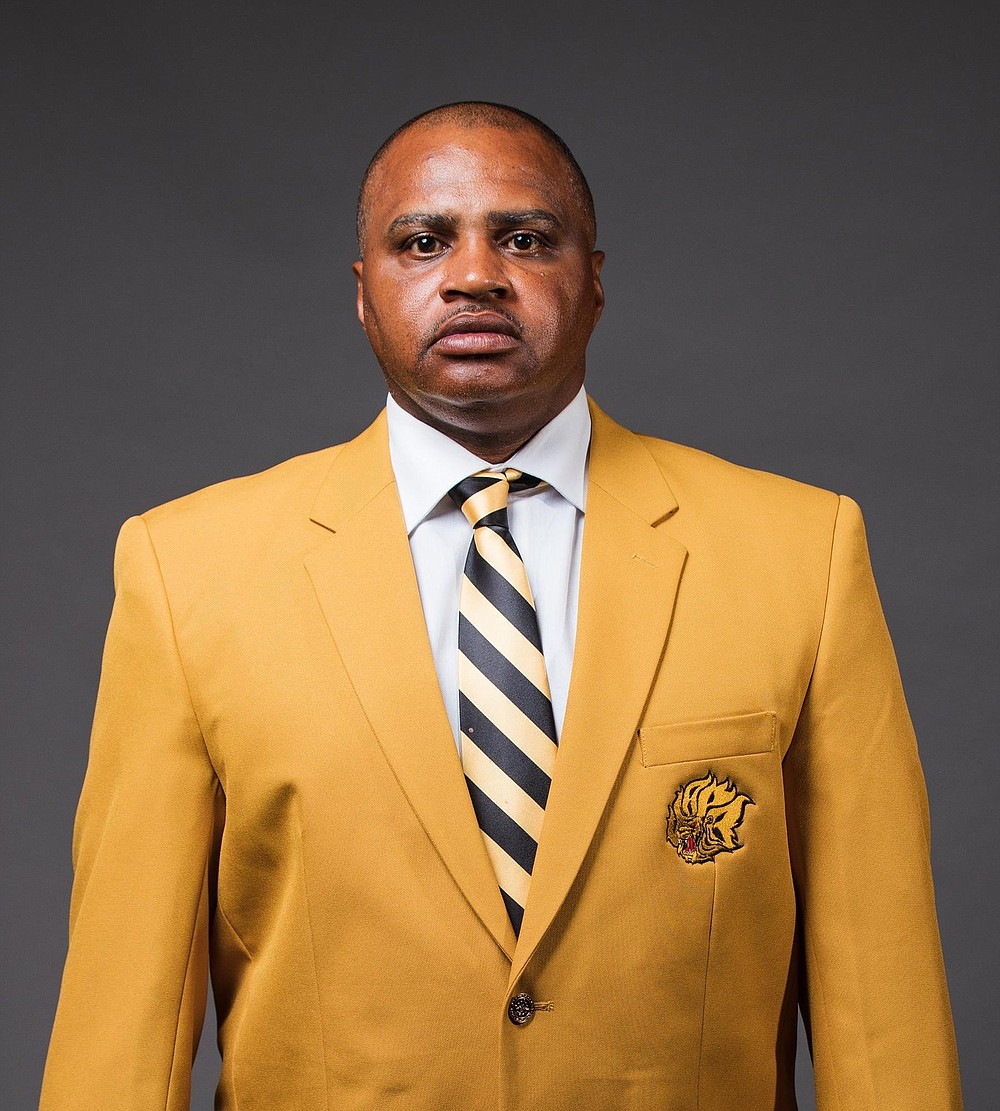