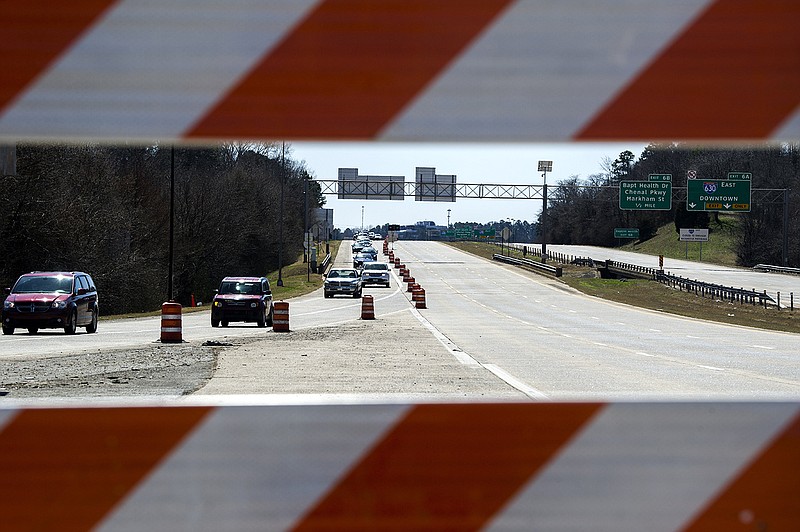 Cars are diverted off of I-40 North as the highway is shut down for construction on Saturday, March 6, 2021. Most traffic was diverted through a neighborhood in Pleasant Valley, while large trucks were instructed to turn around and head back south to avoid complications with the neighborhood traffic. (Arkansas Democrat-Gazette/Stephen Swofford)

Vehicles, including some trucks, crept along the two-lane Rodney Parham Road and backed up for nearly a mile along northbound I-430.

This weekend all southbound lanes on I-430 between Cantrell Road in Little Rock and Interstate 40 in North Little Rock are closed until 5 a.m. Monday.

Only a single lane of traffic across the Arkansas River Bridge on I-430 North from Cantrell Road is open.

Crews closed the interstate this weekend to facilitate work on a $31.7 million project to improve the bridge over the Arkansas River that connects Little Rock and North Little Rock.

Rob McConnell, president of the Pleasant Valley Property Owners Association, who lives along Rodney Parham Road, said Friday that he thought the diversion route through his neighborhood would be a "roaring disaster."

On Saturday, he said it wasn't as bad as he'd expected, but was still very unpleasant for the Pleasant Valley neighbors.

During the day Saturday, police officers were on hand to help control traffic at North Rodney Parham Road and Pleasant Valley Drive.

"I just can't imagine there was not another way to reroute this or another time to do it," Peck said.

Directions along the route were lacking Saturday. For example, there was a sign signaling that an I-430 North lane was accessible ahead on Pleasant Valley Drive, but there were no signs directing drivers to get to that street.

"They were supposed to put up a sign on Arkansas Valley that was for local traffic only," McConnell said. "And what people are doing is they're cutting through a street that there's a lot of houses [on], and it does not follow the path that they had agreed upon."

There had already been some damage to the street, he said Saturday afternoon. McConnell said his wife saw an accident at Pleasant Valley and Arkansas Valley drives Saturday.

"A car coming through from Arkansas Valley at that stop sign got T-boned by another car," McConnell said.

Rodney Parham is narrow, especially for larger vehicles, Peck said. "On one side there are ditches, and it's a very tight turn when you turn from Pleasant Valley by the First Baptist Church onto Rodney Parham."

Adding to the worries are today's in-person church services in the area.

"There'll be issues with both because they're well-attended churches," McConnell said.

He said that when the diversion route was being planned, he spoke with Transportation Department officials. They told him that they had initially suggested that traffic be diverted east down Rodney Parham Road to Reservoir Road but that Little Rock planners chose the Rodney Parham-to-Pleasant Valley route.

The Property Owners Association was unable to contact officials in any city departments, McConnell said.

"We could never get any traction," he said. "They would never respond to our organization. Everybody's kind of running for the exits."

"That's kind of a Public Works, Street Department, as well as our special operations kind of effort," Barnes said. "We met with Arkansas Department of Transportation back when we knew this was going to happen and started to come up with the best way."

Barnes said the agencies were stuck between a rock and a hard place, with no good alternatives for diverting traffic from a heavily traveled interstate.

"Really there's no great way to alleviate any of that traffic through the city because that's such a major throughway interstate-wise," Barnes said.

Little Rock spokeswoman Stephanie Jackson said Saturday that there was no city involvement in deciding the diversion route.

McConnell said he hopes that in the future, the agencies consider a different route than through his neighborhood.