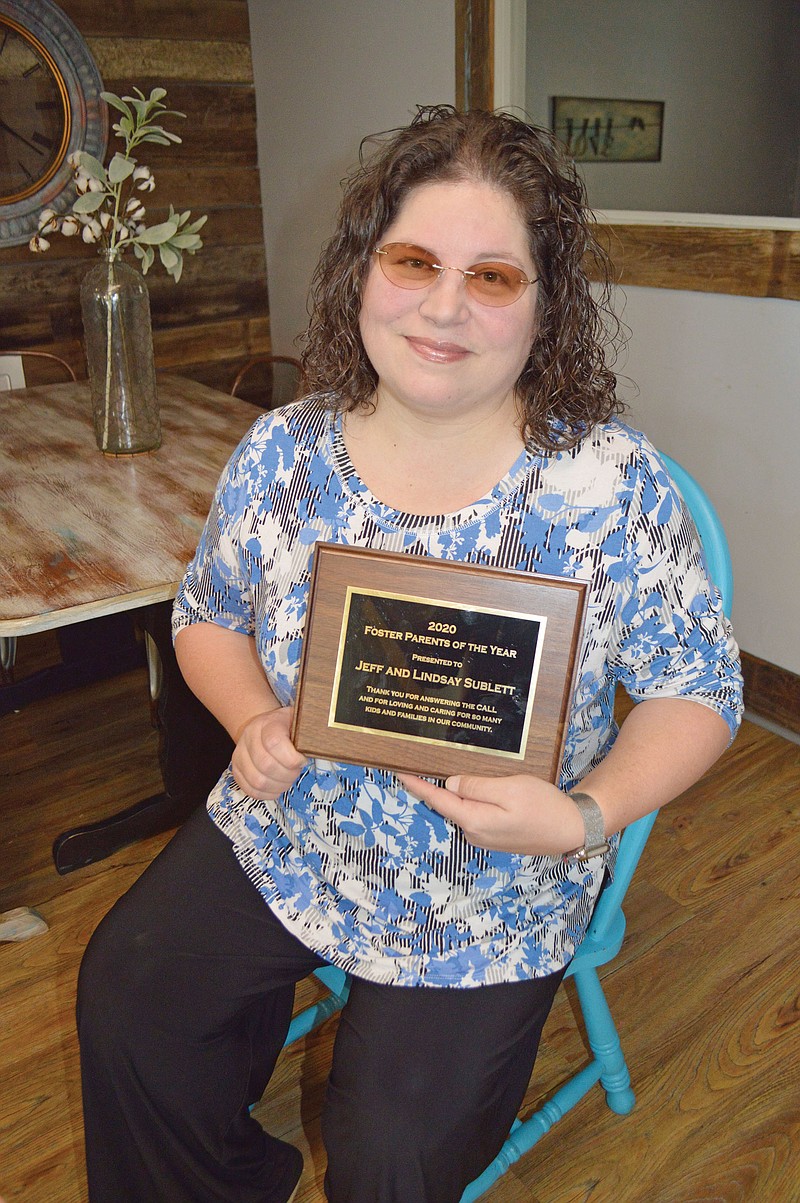 Lindsay Sublett of Bono holds the plaque that she and her husband, Jeff, received as 2020 Foster Parents of the Year. It was awarded by Children of Arkansas Loved for a Lifetime in Conway and Faulkner counties, and she is pictured in The CALL house in Conway. The Subletts have one biological son, two adopted siblings and are fostering-to-adopt a sibling group of five. “I cry at least once a day out of happiness; there is just so much joy,” Lindsay said.

Lindsay and Jeff Sublett of Bono had a son 14 years ago, but the couple experienced heartbreak when they tried to have more children.

Now they’re about to be a family of eight.

The 2020 Foster Parents of the Year have been expanding their family since 2018, when they opened their home for foster care. They adopted two children, Dawn and Alexander, in 2019, and are fostering a sibling group of five whom they plan to adopt.

“I cry at least once a day out of happiness; there is just so much joy,” Lindsay said.

The couple, who grew up in Greenbrier, married in 1998, and Lindsay said she had difficulty getting pregnant and experienced several miscarriages. Lindsay said she and Jeff knew they eventually wanted to adopt children.

The couple started foster-parent classes in 2002 through the Arkansas Department of Human Services. They took a break from the training and moved to Alaska for 4 1/2 years for a change of scenery and a fresh start.

Their son Rodney was born in 2006 in Alaska with a heart condition and was in a newborn intensive-care unit for two months. They moved back to Arkansas when Rodney was a baby and eventually completed their foster training through Children of Arkansas Loved for a Lifetime in Faulkner and Conway counties, also known as The CALL.

The couple opened their home for foster children in September 2018, when Rodney was 12. They were immediately matched with two siblings, now 19 and 13.

Lindsay said it seemed meant to be to adopt the siblings.

“The Lord gave us a lot of confirmation,” Lindsay said. She said her due date was June 2001 for a pregnancy that resulted in a miscarriage. “That’s when our daughter, [Dawn], 19, was born,” Lindsay said.

She said it was a miracle that they were able to foster and adopt their daughter.

“They have to live in your house six months before they can be adopted,” she said, and be adopted before they turn 18. “We beat that by two days before her 18th birthday.”

Daniela Salamo, the Arkansas Department of Human Services adoption specialist in Northwest Arkansas who matched the brother and sister with the Subletts, has high regard for the family.

“They’re the best family in the world,” Salamo said immediately on hearing their names.

Salamo said Lindsay contacted her after seeing another child on Project Zero, a nonprofit group that DHS works with to help place children. Salamo said she told Lindsay that child had found a family, but she suggested Dawn and Alexander, who were then 17 and 10, respectively.

“They are genuinely really, really good people,” Salamo said of the Subletts. “They want to adopt for selfless reasons, not just to grow their family, but to provide [children] with the love and stability they deserve.

“The dynamic of their family was just perfect — the heart they have and the belief that they have just matched very well. I honestly don’t know if there’s a kid in the world these people wouldn’t be a good match with.”

Lindsay said she and her husband have had more than 20 foster placements since they opened their home to children, including overnight stays.

Their five foster children, whom they hope to have adopted by this summer, range in ages from 4 to 14, including 4-year-old twins.

The Subletts have four boys and four girls in the house.

The five children, added to her three, have been “a huge challenge,” she said, “but we all stay home. Once COVID-19 happened, we took the three little ones out of day care. We have a very simple life; we home-school.”

Lindsay has a teaching degree from the University of Central Arkansas in Conway, and Jeff is a mechanic. He’s also reserved and “avoids the limelight at all costs,” she said.

Jeff doesn’t want any attention, but he gives his family plenty, Lindsay said.

“He’s a huge support. There’s no way, no way I could do this with this many kids [without his help],” she said.

She said she sleeps in every day while her husband gets the routine going.

“My husband makes breakfast, my daughter makes lunch, and I make supper,” Lindsay said. “Eating out is rare because it’s so expensive with a family of 10.”

Although it can be overwhelming to have eight children, Lindsay said, they all help each other.

“We had one son for 12 years, and he was a job. It wasn’t easy; it wasn’t a breeze. You have to occupy them when you have one. These kiddos occupy each other; they have board-game schedules. They are to the minute, ‘I’m supposed to be here at this time,’ very routine. Our house is very scheduled, organized, and everybody helps with everything. The kids jump in. One had occupational therapy today, and one of the teenagers was in there holding the iPad.”

As with any siblings, arguments arise.

“The biggest challenge is getting along. We’re always working on being kind, reacting with kindness — kind words, not anger. They had terrible models growing up. I had a long conversation with one of my seventh-grade boys; they got in a fight throwing snowballs.”

Lindsay asked the boys if they ever thought she got mad, and they said yes.

“I asked them, ‘Have you ever seen me throw something?’ They said no. I said, ‘How would you feel?’”

She told the boys her goal is to teach them to react calmly.

“We have conversations like that two, three times a week. It’s constant teaching,” she said.

Kids, especially teenagers, need their own space, and they have plenty at the Sublett home.

“This is another miracle story,” Lindsay said. The Subletts previously lived in a shop/two-bedroom home that her brother built, down the road from her parents’ large home. Her parents decided their home was too big for them.

“We traded houses [with my parents]. I’m living in the house I grew up in,” she said.

The Subletts also added on to the home. “We’re always remodeling. You should see our bedroom right now; it’s a mess,” she said, laughing.

The Subletts’ five older children all have their own rooms, “which has been a wonderful thing,” Lindsay said.

It takes time to merge what was basically three families, she said — the Subletts and their biological son, the adopted children and five foster children.

“When you merge that all together, it’s just really tough,” she said.

Lindsay said all the children immediately accepted Jeff and her as their parents.

“They’re just so loving; they’re just so appreciative for a home,” she said. “I have so many best-mom-ever certificates they made, that sort of thing. You almost get overwhelmed with affection. It’s surreal.”

Lindsay recalled that her adopted daughter was getting ready with one of the 4-year-olds, and the young boy heard Lindsay cough.

Lindsay shared a note Dawn wrote to Jeff and her, telling them she loves them and appreciates everything they do for her. Dawn wrote, in part: “Dear Mama and Daddy, … I love being a Sublett. Having y’all as my parents is the best thing I could ever ask for. The only thing I ever want is to make y’all happy.”

Lindsay said their teenage foster daughter is bonding with the family, too.

“We were watching a movie one night, and the teenage [foster] girl came over and gave me a big hug and a kiss — she has kind of a raspy voice — and said, ‘Thank you for taking care of all of us, Mom.’ It came out, ‘Thank you for taking care all us.’ She hadn’t been here that long, and she wanted to be here so bad. She’s not that affectionate, so it’s a big thing that she did that.”

The goal of fostering is to reunite the child or children with their biological parents.

“That, in my opinion, is the most noble thing, to be behind that, to keep the biological family together. I know that is their hearts’ wish. That’s what I wanted for our [five foster] kids, but it didn’t happen,” she said.

The Subletts earned the Foster Parents of the Year honor in the fall from The CALL, which works to recruit, train and support foster families, typically through churches.

Louise Witcher, coordinator for The CALL in Conway and Faulkner counties, said the Subletts are unusual because they never turn down a child who needs a placement.

“This family never hesitates to step up when we need a child to be placed, no matter what age or how hard [the children] are mentally,” she said. “[The couple] are always ready to to take the child on. They step out on faith all the time.”

“I would recommend fostering. It’s hard,” she said. “We started to go right into adopting, but I would foster. You’re just loving them, and I know it’s painful when they go home, but you get so much out of the experience.”

Lindsay said she and her husband will accept more teenagers to foster when her older children move out on their own.

But for now, her home and heart are full.