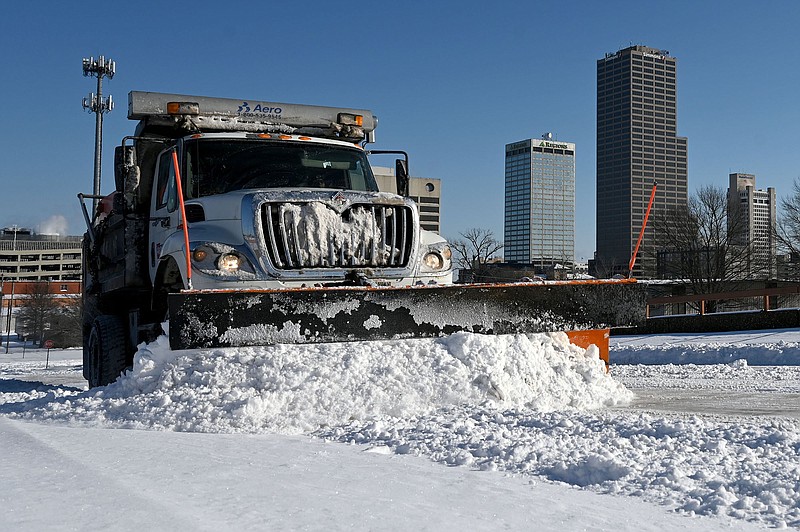 The winter storm that hit Arkansas and much of the United States in mid-February may seem like an anomaly, but scientists said extreme weather is likely to become a more common occurrence.

The U.S. Environmental Protection Agency projects that Arkansas will continue to warm over the ensuing decades. With that warmth will come increased moisture and energy, which could produce more heavy precipitation and winter storms, climate scientist Katharine Hayhoe said.

The changing climate is likely to increase inland flooding as well as more severe droughts for the Natural State, threatening agriculture, one of the state's most vital industries, according to according to the EPA's "What Climate Change Means for Arkansas" 2016 report.

No single weather event can be directly attributed to climate change. Weather is what the world experiences in the short term, like someone's mood on a single day, while climate is more like someone's personality. Change in Earth's climate is and will likely cause more frequent extreme weather, shifting our concepts of what normal weather looks like, Hayhoe said at 2021 Citizens' Climate Virtual Tornadoes Regional Conference on Feb. 20.

This more moody climate affects many aspects of life. One aspect hit hard is and will be farming.

One of the main factors at play was the polar vortex -- a large area of cold air high up in the atmosphere that normally spins near the North Pole. This pressure system can and did become less stable, spilling colder air south, which brought the record-low temperatures, he said.

Parts of central Arkansas experienced temperatures at around -8 degrees Fahrenheit, not seen since the 1950s. Arkadelphia set an all-time record low of -11 degrees and Fayetteville at -20 F, according to the Weather Service.

The strong air current, jet stream, from the Arctic merged with a subtropical jet stream from California over Texas and Arkansas. This provided tropical moisture from the Pacific Ocean, Cavanaugh said. More moisture rolled in from the Gulf of Mexico over Arkansas and combined with the cold air and moisture already in place and -- as if that wasn't enough -- with a lift from storm systems coming down from eastern Russian.

The snowfall also shattered records in the state. In Little Rock alone, last month set records for all-time snowiest day in February at 11.8 inches on Feb. 17 and snowiest February and of any month at 20.3 inches. It tied with 1918 for highest snow depth ever recorded at 15 inches.

"That provided the perfect environment of having a lot of cold air, sufficient moisture and a lot of lift to give us record-setting snow fall across much of central and southern Arkansas," Cavanaugh said.

Overall, winters are getting hotter, said Hayhoe, who is the director of the Climate Center and an associate in the Public Health program of the Graduate School of Biomedical Sciences at Texas Tech University.

Using her town of Lubbock, Texas, as an example, Hayhoe said the baseline is shifting. Lubbock averaged a January temperature of 38.7 F from 1950-2000, but it has steadily seen more years above that average. Since 2010, every January in the town has been above average, according to the National Centers for Environmental Information.

"Long term over climate time scales, [the temperatures] are steadily ticking upwards, even as we have some years that are warmer and some that are cooler," she said. "Winter has been getting hotter quicker than any season in Texas and much of eastern United States. ...We don't even know what a normal winter looks like anymore."

One factor that could seem counter-intuitive given the record cold is that warmer air can carry more moisture. This can result in increases in heavy precipitation, Hayhoe said.

"So, when a storm comes along, there's more water vapor to dump on us than there would have been 100 or 50 years ago," she said. "So even when it's cold enough to snow, below freezing, there's still more water vapor in the air. On the East Coast, they've seen an increase in heavier snowfalls even as winters have been warming. We have warm, warm, warm and then big, giant snow storm."

This increase in water vapor due to higher temperatures equates to an incredible increase in energy available, Cavanaugh said.

"If you take any system and provide it with more energy, more extreme things can happen," he said. "Think about bumper cars: If you're at an amusement park in bumper cars that can move at five miles an hour, you bump around and have fun. If you add more energy -- imagine those cars moving at 10 or 15 miles an hour -- you have the same bumper cars, but the reaction is much more intense. People might actually get hurt."

Compared to most of the nation, Arkansas has not become that much warmer during the last 50 to 100 years. The average temperature for January from 1901 to 2000 was 39.3 F for the state, according to the National Centers for Environmental Information. Since 2010, Arkansas has seen five Januarys below that average and seven above, with a new average of about 40.1 F for that 12-year span.

This doesn't mean it hasn't felt the effects of the overall warming trend. Annual rainfall has increased in much of the state, and more rain arrives in heavy downpours, according to the EPA's "What Climate Change Means for Arkansas" 2016 report.

Over the coming decades, the state will become warmer, according to the report. Changes in the climate will likely lead to more extreme weather, namely more severe floods and drought causing more storm damage, reduced crop yields, harmed livestock, increases in the number of unpleasantly hot days and increases in heat-related illnesses.

Some Arkansas farmers say they have already felt the impact of more extreme weather from the recent winter storm to droughts and flooding over the past few years.

The recent winter storm was particularly difficult on the cattle industry, which saw many heifers and newborn calves sickened or killed by the cold on top of equipment and building damage, said Jessica Richard, who works with the Arkansas Farm Bureau's beef, dairy and equine divisions.

It's peak calving time and around 25 died from the winter storm at Fawcett Ranch near Ashdown with others still sick, Brett Fawcett, 59, said. He couldn'tremember it being that cold and getting that much snow at the same time, he said. Food trucks couldn't come, his equipment wouldn't run, and pipes froze and flooded his house.

"It was rough, I'll just tell you that," Fawcett said. "I worked from daylight til dark trying to do all I can for them, but there's only so much you can do. ... I know what I'm going to do next time if it happens again. Hindsight's 20/20."

Seventy years from now, Arkansas is likely to have 30 to 60 days per year with temperatures above 95 F, compared with 15 to 30 days today, according to the EPA report. Hot weather causes cows to eat less and grow more slowly, and it can threaten their health.

During the next few decades, hotter summers are likely to reduce corn and rice yields. However, the higher concentrations of carbon dioxide in the air could increase crop yield that would likely offset the harmful effects of heat on soybeans and cotton. For farms without adequate irrigation, these increasingly severe droughts could cause more crop failures.

Flooding in 2018 and 2019 and persistent rainfall in 2020 caused problems for Arkansas farmers. Flooding is a huge problem in the Delta, Shoffner said, and has only been getting worse. The 2018 flooding was the worst she and her father had ever seen, she said.

"2018 was the worst year I've ever seen, and my dad said it's one of the worst he's ever seen -- he's been farming for 60 years. It did not stop raining, and crops were crap," Shoffner said. "That same planting year, there was an extreme drought. So it was hard to get plants in the ground and hard to get them out of the ground. It's those kinds of extremes.

"If you can't make a crop, then you can't pay off your crop loan. Then, where are you?"