More in state made eligible for covid shots 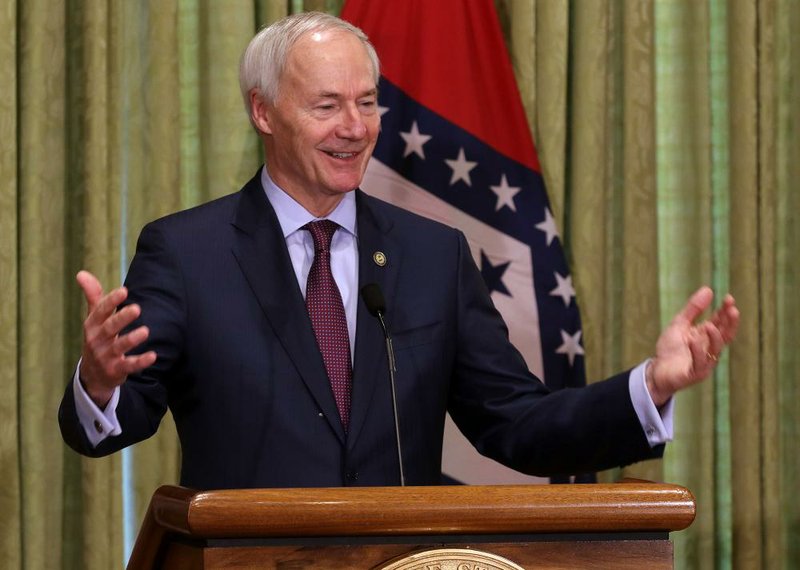 Gov. Asa Hutchinson answers a question during a press briefing on Wednesday, April 8, 2020, at the state Capitol in Little Rock. (Arkansas Democrat-Gazette/Thomas Metthe)

After disappointing turnouts at mass vaccination clinics over the weekend, Arkansas is expanding access to covid-19 vaccines to all remaining categories in Phase 1-B of the state's inoculation road map, Gov. Asa Hutchinson announced in a news conference Monday morning.

Those remaining categories include essential government workers, people with intellectual and developmental disabilities, grocery store and meal delivery service employees and manufacturing, public transportation and postal/package delivery staffs, among others.

"All of those who are dealing in a public facing or close environment or a critical industry that needs to be covered," the governor said.

Increased vaccine supply combined with decreasing demand, possibly caused by vaccine hesitancy and the near-completion of some categories, drove the decision to expand access, Hutchinson said.

Last week, the state Health Department expanded access to some agricultural workers as well as employees in the meat processing industry. That expansion added roughly 49,000 who became eligible.

"Over the weekend, we had some great mass clinics, but we noticed we did not have the demand we anticipated," Hutchinson said. "Which indicates either people are getting the vaccines in different places, we are getting more of them covered or that there is some resistance to the vaccines."

Out of 3,000 appointment times at a clinic in Jonesboro Saturday, only about 2,000 were filled, Hutchinson said.

As of Monday afternoon, more than 684,000 doses, including first and second shots, had been given, representing about 63 percent of the 1.8 million doses of the Pfizer and BioNtech, Moderna and Johnson & Johnson vaccine allocations the state has received since rollout began in mid-December, according to the Health Department.

An initial shipment of 24,400 Johnson & Johnson vaccine doses was targeted largely at employees in the food processing industry as well as any remaining employees in the education sector who had not yet been vaccinated.

The Health Department is working to vaccinate workers in some of Tyson Foods processing facilities with a portion of the Johnson & Johnson allotment, for example, Dr. Jennifer Dillaha, the state epidemiologist, said.

Public health officials said they expect to receive bigger shipments of the recently approved Johnson & Johnson vaccine, which unlike the other vaccines is one dose, within a couple of weeks. Until then, it will not be widely available.

The first regional vaccine clinic is planned in Conway County on March 11, followed by clinics on March 12 in Lee, Mississippi, Dallas and Pulaski counties. Subsequent clinics will be held in different parts of the state, likely on a weekly basis.

"We are getting more doses per week at the Arkansas Department of Health, so that gives us some flexibility to do these large vaccination clinics," Dillaha said. "Of course, Arkansas is a fairly rural state, so there is a limit to how big you can do a vaccination event."

Public health officials say that despite the low turnout at vaccine events, there have only been about 200 wasted doses across the state.

A pharmacy in Little Rock has partnered with a new start-up offering a nationwide platform aimed at reducing vaccine waste.

That platform, called Dr. B, is piloting its vaccine standby waitlist program with Cornerstone Pharmacy at 4220 N. Rodney Parham Road. Dr. B is piloting the concept with a second health provider in New York City.

The premise behind Dr. B is simple. People register via their website with information such as a phone number, date of birth, and ZIP code, then if a health care provider has extra doses available, a text message is sent alerting people of the extra doses.

Registrants can confirm whether they are able to arrive at the vaccine location within a certain time frame to receive a shot.

"Patients are canceling their appointments 20 to 30 percent of the time or no-showing, so that means there is a last-minute scramble that is happening at almost every vaccine site across the country," Cyrus Massoumi, an investor and entrepreneur who founded Dr. B, said.

"That is resulting in one of a few things happening," said Massoumi, who also founded the medical appointment site ZocDoc. "Either the vaccine is going to someone who is just conveniently there, or to someone who has the ability to spend time waiting in line in the hopes there is excess vaccine, or the worst case scenario, the vaccine dose will go to waste."

Dr. B uses a queuing system where the technology offers excess vaccine appointments to individuals in order of their priority in a state's vaccine rollout plan. For example, a 65-year-old woman would receive a message alerting her to an extra dose before a 30-year-old who's signed up on the site.

Massoumi said this type of queuing system is especially crucial for people who initially had vaccine hesitancy and now want a shot or for those in communities of color who nationally have been underrepresented in terms of the percentages vaccinated.

Dr. B launched targeted media campaigns in Little Rock to inform Black and brown communities about the platform, he said.

More than half a million people have registered with Dr. B while 200 providers in 30 states have asked to partner with the site.

Massoumi declined to provide the exact number of Arkansans who have received a vaccine after signing up with Dr. B, but said the site has "seen a tripling of the number of people in Little Rock who are on the waitlist."

The increase in new cases of the coronavirus remains low in Arkansas, with the Health Department reporting 133 new cases Monday.

Active cases fell by 374 from the day before, to 3,593, according to state Health Department data.

The decrease in new case numbers could indicate the state may be reaching herd immunity – when enough people become immune to a disease that its spread becomes unlikely – or that the coronavirus is a seasonal virus, Dillaha said.

She said it could also be attributed to vaccinations.

"I think it is a combination," Dillaha said. "It could be that there is a seasonality to covid-19 that we would not have known about because we have not seen it before or it could be that we are further along with herd immunity."

"I think it is multifactorial," she said. "Whatever we are doing, we need to keep doing it."

Deaths from the virus increased by 24, bringing the overall toll since the pandemic began last March to 5,343. There was delayed reporting for 15 of the deaths, with 14 from last year and one from late January, Dillaha said.

Hospitalizations increased by three from the day before, to 338, Monday, the Health Department reported. Of those hospitalized, nine additional patients were placed on ventilators, bringing the total to 74 on Monday.

"I think the vaccinations are having an impact," Dillaha said. "We know the people who are most likely to be hospitalized and die from covid are those who are older, and we have vaccinated a large portion of those people."