Route on Fayetteville’s street plan needs to be reconsidered 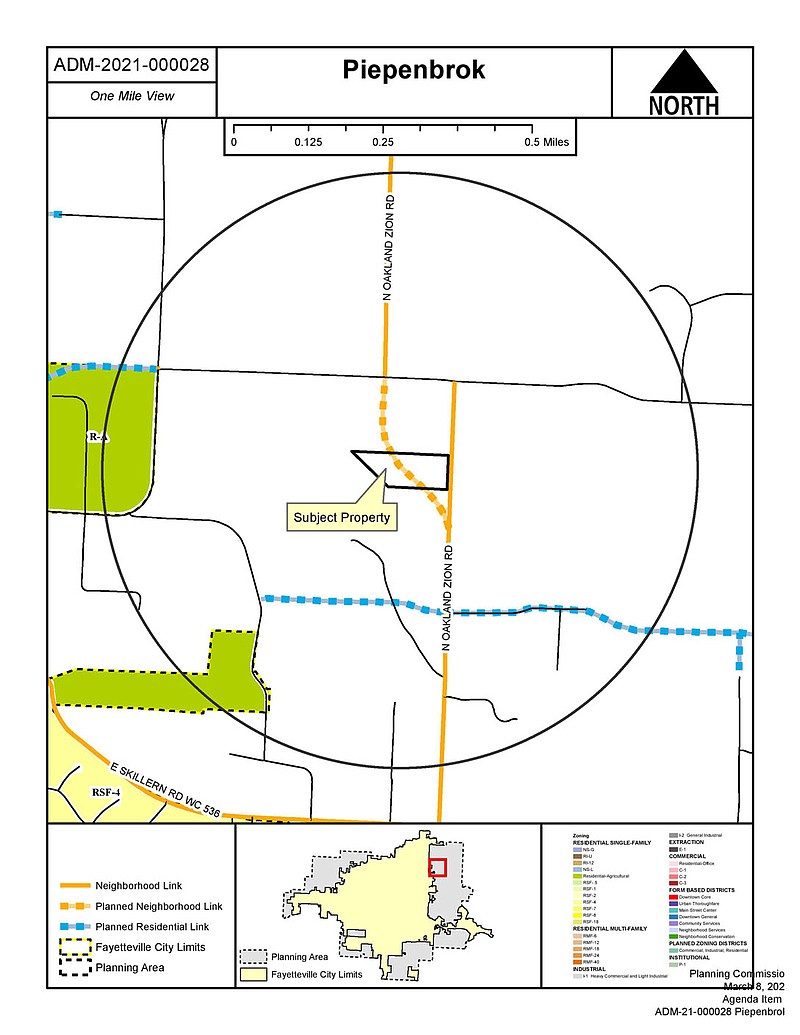 FAYETTEVILLE -- A route on the city's overall street plan may not be needed but should get a closer look, a majority of planning commissioners agreed Monday.

The route in question lies east of the city limits on the northeast side of town, southeast of Crossover Road and Joyce Boulevard, and immediately east of Mud Creek.

The city's overall street plan proposes aligning the two pieces of Oakland Zion Road with a curved connection stemming from the south to the north. The connection is drawn through land owned by Kim Piepenbrok. She told the commission she intends to split the property in half and sell the westernmost portion, closest to Mud Creek.

"It's just causing me a financial hardship, not being able to sell that property," Piepenbrok said. "With this proposed road, which may or may not ever happen, I don't want to have to put it on the survey. I've fully disclosed to all buyers who have been interested, and they're well aware of it."

The piece running through Piepenbrok's property is about 430 linear feet. Planning staff recommended removing the entire proposed connection, about 1,500 linear feet, from the overall street plan.

The land lies outside the city limits and falls under Washington County's zoning standards, Development Review Manager Jessie Masters said. Requiring a property owner to build the street section would not meet the city's rough proportionality for development, she said. Additionally, the surrounding land use is low in density with single-family homes and agricultural uses, so the city is not likely to initiate realigning the intersection anytime soon, she said.

Some commissioners expressed hesitancy with removing the link from the map, but acknowledged Piepenbrok's difficult situation. Commissioner Porter Winston recommended the proposed route on the street plan be removed. However, the section of Bridgewater Lane between the two pieces of Oakland Zion Road should be designed to look like Oakland Zion Road, creating a contiguous route, he said.

The proposed route as drawn encourages faster car speeds, and Winston said he preferred keeping a more grid-like alignment in the area to encourage corner-lot development and to slow down cars.

"I'm leaning toward creating situations where some magic can happen," he said. "I just don't see the magic really happening on a zoom-zoom."

Winston's motion passed 7-1, with Commissioner Matt Hoffman voting against. Commissioner Kris Paxton was not in attendance.

The City Council's Transportation Committee will review the commission's recommendation before forwarding it to the full council for consideration.

In other business, the commission voted 7-0 to rezone an acre on Cherry Lane, just north of Huntsville Road on the south part of town. Commissioner Rob Sharp did not have a vote recorded after he was called on several times. The meeting was held online on Zoom. The rezoning will allow a higher density of residential development than the current zoning of residential single-family, up to four units an acre.

A neighbor on Cherry Lane, Donna Campbell, asked the commission to deny the request, saying she couldn't see how the nearby property owners could squeeze more residential units onto the land. She said the development would happen behind her house, where her living room faces.

Commissioners said they believed a higher density residential zoning was appropriate for the area. Commissioner Leslie Belden said she didn't like how the land sat right behind other peoples' homes, but voted in favor of the rezoning. The City Council will have final say on the request.

• A permit for Hounds Lounge at 2407 N. College Ave. to continue operation with different attempts to have plant growth cover a fence facing the street. Plants have struggled to grow on the fence because of “pet interactions,” according to city planning staff.

• Rezoning an acre northwest of Razorback Road and Sligo Street to allow multifamily development with a potential mix of commercial use.