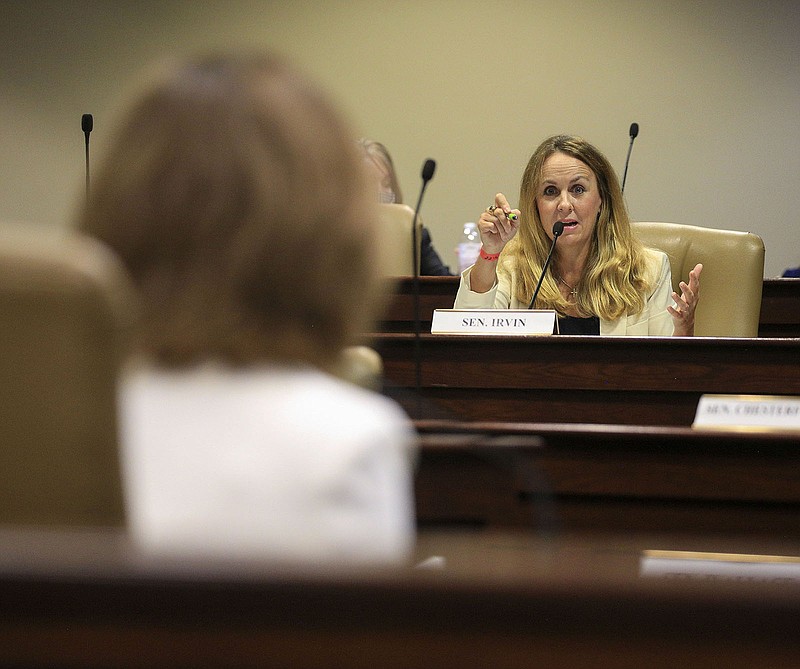 A bill that would deter Arkansas schools from allowing transgender athletes to participate in girls' and women's sports cleared the state Senate Education Committee on Monday.

Senate Bill 354 by Sen. Missy Irvin, R-Mountain View, would allow students "deprived of an athletic opportunity" or suffering "direct or indirect harm" as a result of a kindergarten-through-12th-grade school or higher-education institution not maintaining separate teams for cisgender female students to seek injunctive relief against the school, as well as monetary damages.

"It preserves the fairness in women's sports by making sure that girls have the ability to compete on a level playing field," Irvin said.

The proposed legislation has opposition from LGBTQ-rights advocates, who say it discriminates against young transgender people.

"This legislation relies on separation of trans youth from their peers, and as we've seen, isolation leads to many mental health issues, much less intentionally separates children from meaningful social relationships," said Brody Craig, an Arkansas educator who is transgender.

The committee's 5-3 vote on the bill was along party lines, with the three Democrats on the panel voting no.

Supporters of the bill and of national efforts to keep transgender participants out of women's sports say it's unfair for cisgender girls and women to compete against athletes who were assigned the male gender at birth.

"We should not idly wait by for a female in Arkansas to be seriously injured to do something," said Beth Stelzer, a Minnesota power-lifter and the founder of the group Save Women's Sports.

In response to a question from committee member Sen. Linda Chesterfield, D-Little Rock, Irvin said the participation of transgender athletes had not been an issue in Arkansas to date.

Irvin was joined by Matt Sharp, senior counsel with Alliance Defending Freedom, a faith-based advocacy group. Sharp is representing four cisgender female athletes in Connecticut in a federal lawsuit challenging a state policy that allows transgender students to participate as their identified gender. The litigation came about after two transgender runners combined to win 15 championship races.

Dr. Janet Cathey, a co-founder and former faculty member at the Gender Clinic at the University of Arkansas for Medical Sciences who has cared for transgender patients in the state since the 1980s, said transgender females participating in sports has never been an issue.

"Most of these kids are not at the elite level. They're just kids who want to play games, run at field day and be on a swim team," Cathey said.

Arkansas is one of more than 20 states whose lawmakers have introduced bills to prevent transgender females from competing on girls' and women's school sports teams, according to The Associated Press.

Mississippi is on track to become to first state this year to enact such a law.

Idaho became the first state to enact a law to curtail transgender students' sports participation, but the 2020 measure is blocked by a court ruling.

In other business Monday, legislation by Sen. Joyce Elliott, D-Little Rock, that would require the state to return a public school district to local control if that district has been under the authority of the state Board of Education for more than five years and has elected a school board, failed to gain enough votes from the committee to pass.

Senate Bill 314 would have required the state to release the Little Rock School District from conditions that remain in place until the district exits the Level 5/Intensive support category of the state's school accountability system, despite the district swearing in its first democratically elected board late last year, after nearly six years of state control.

The current conditions prohibit the new board from changing superintendents, recognizing an employee union for contract negotiations and instigating lawsuits unless there is approval from the state Education Board.