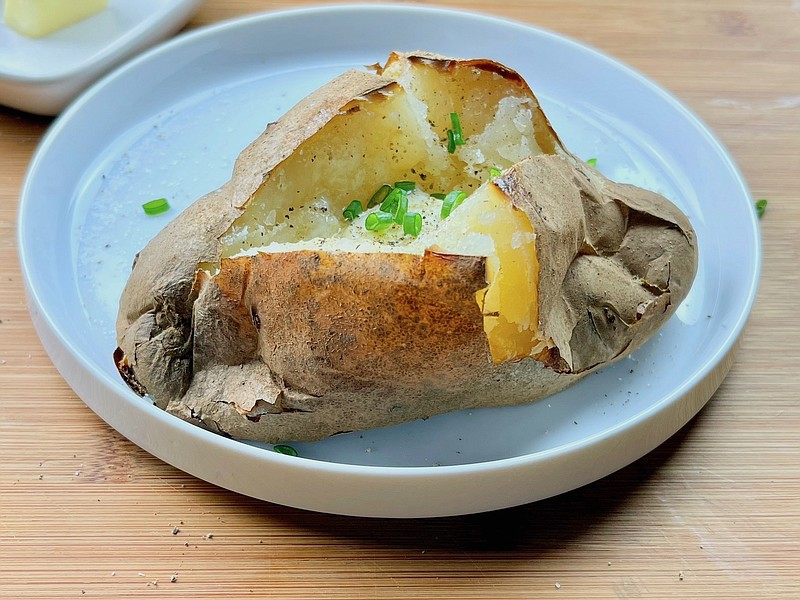 Baked potatoes are among the first foods I learned to cook. As my mother's kitchen helper, I was most often tasked with things that didn't require using a knife or hold the potential to make a big mess. Scrubbing russet potatoes under running water and poking them with the tines of a fork was right up my alley.

The potatoes would then go into the oven for about an hour, depending on their size. Sometimes directly on the oven rack and sometimes on a baking sheet. We never wrapped them in foil because that would steam them and the goal was always piping hot, fluffy flesh and crisp skin. The baking temperature varied depending on if the potatoes were cooking alongside something else or by themselves.

As an adult, I stuck with Mom's method, but would often give the potatoes a 10-minute head start in the microwave in an attempt to cut down on the long cooking time. Today, Mom uses a potato cooking pouch my aunt made her and cooks them entirely in the microwave.

Somewhere along the way, I read that rubbing the skin of the potatoes with oil and seasoning them with salt would produce a better baked potato; a step I've used intermittently through the years.

Sometimes the potatoes come out perfect and sometimes they come out soft and sort of shriveled.

I think it's safe to assume many of you may cook your baked potatoes using one of those methods.

Recently, I read about a British method of preparing baked potatoes, called jacket potatoes in the U.K., that veers slightly from the way my mom taught me. (I always thought of jacket potatoes as any potato cooked in its skin, but from what I can tell, in the U.K. a jacket potato is always baked.)

This British method calls for upping the cooking time and replacing all that poking with a single small "t" cut into the top of the potato.

I recently gave the method a try, following the instructions from cupofjo.com:

[Video not showing up above? Click here to watch: arkansasonline.com/310burner]

Heat oven to 400 degrees. Cut a cross on top of the potatoes. Place the potatoes directly on the top oven rack. Cook for 2 hours or until skins are crisp. Pull the rack out, cut the potatoes open again (the same cross, just make it bigger) to release the steam, then put them back into the oven for 10 minutes. Serve right away, topped as desired.

If crispy skin is your favorite part of a baked potato this is definitely the way to bake them. The spuds I made following those instructions came out with crackling crisp skins and piping hot, fluffy flesh. In a word: perfect.

The only drawback I've found, aside from the time commitment, is you have to serve these baked potatoes right out of the oven. If you try to hold them for long after baking, the skins will soften.

I couldn't help but ask, would this method work on a sweet potato?

The short answer: no.

The sweet potato I baked — as to be expected — oozed its sugary juices all over my oven floor where they promptly burned and smouldered, leaving smoke in my kitchen and a mess to clean later without the payoff of a crackly, crisp skin.

But it wasn't a total disaster. Cooking a sweet potato using this method resulted in an extraordinarily tender-fleshed sweet potato that slipped effortlessly from its skin. Next time I'll remember to place the potato over a baking sheet.