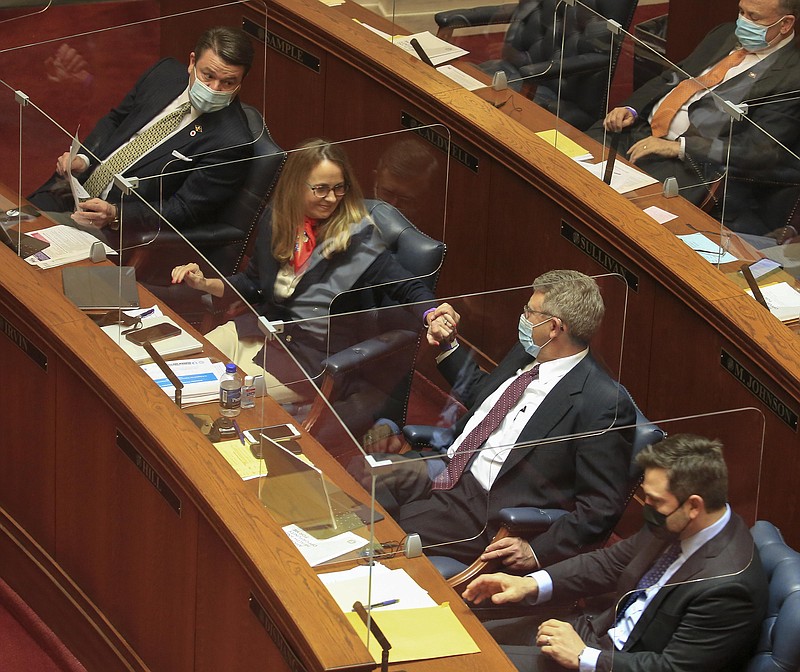 The Arkansas Senate on Tuesday handily approved a bill that would add incentives for work, continuing education and other activities to the state's version of Medicaid expansion, which provides largely private health care coverage to low-income Arkansans.

The Senate voted 26-3 to send Senate Bill 410 by Sen. Missy Irvin, R-Mountain View, to the House for further consideration. Eighteen Republicans, seven Democrats and an independent voted for the bill.

If enacted, SB410 -- the proposed "Arkansas Health and Opportunity for Me Act" -- would clear the way for the state Department of Human Services to apply for a waiver from the federal government for what would be called the ARHOME program.

"It is intentionally designed to make differences in the lives of Arkansans in order to improve their health, their life circumstances and continue to build a strong health care infrastructure," Irvin told senators.

"Not only is ARHOME designed to buy health care coverage, but it also designed to address long-standing health issues in our state."

Irvin said the proposed new program is the most responsible and pragmatic policy approach for the state of Arkansas, and it is designed to serve Arkansans, to be a good steward of taxpayer money and to be accountable for its outcomes.

But Sen. Trent Garner, R-El Dorado, told his colleagues that the proposed program is the "third rebranding" of the state's Medicaid expansion program and is "putting lipstick on this pig."

"There is no cost-saving measures compared to what we did before," he said.

Irvin countered that the proposed program is aimed at reducing the growth of state government spending and reflects conservative and sound fiscal policy.

The current Medicaid expansion program's enrollment totaled 311,511 Arkansans as of Feb. 1, up from about 250,233 on March 1, 2020, before the coronavirus arrived in Arkansas, according to the state Department of Human Services.

The state's Medicaid expansion program provides private health insurance coverage for adults aged between 19 and 64 who earn earn up to 138% of the federal poverty level, which is $17,774 for a single person and $36,570 for a family of four.

He said he subsequently served on the Legislature's health care task force and "all over the state of Arkansas, it was clear as we studied this that hospitals were open because of what we did," and his position changed.

"I was wrong. Sen. Dismang and Sen. Sanders were right," Hendren said.

"It would be a tragedy for us to discontinue a program so vital in this time," Hendren said.

In his first term, Republican Gov. Asa Hutchinson signed legislation to create a work requirement for the Medicaid expansion program, which was re-branded as Arkansas Works.

Under the Department of Human Service's plans, low-income people in the program would remain qualified to be covered by private health plans only if they met certain criteria to be set by the department, including working or continuing education or other activities that will lead to long-term economic independence, according to the state Department of Human Services.

Those who failed to qualify would be moved to a traditional fee-for-service model.

Sen. Clarke Tucker, D-Little Rock, said he is not "totally convinced" that the low-income people participating in the program will recognize the qualified health plans as an incentive over fee-for-service.

"I am also concerned about the churn going back and forth" between the private health insurance and fee-for-service programs, but Department of Human Services officials "convinced me mostly that it will be implemented well," he said.

Tucker said the proposed program has wonderful goals, and he hopes the department's implementation of the program doesn't create an undue burden on the people who are served by the program.

The proposed program also would include:

• Home visiting programs for pregnant women and babies in the first two years of life.

• Services to connect with young adults who were formerly in foster care, incarcerated or in the Division of Youth Services custody and veterans.

The program typically covers about 250,000 Arkansans, and 84% of them are enrolled in private insurance plans while the rest get care through the traditional Medicaid program because of their greater medical needs, according to the department.

The state work requirement for the program hasn't been enforced since a federal judge ruled in March 2019 that federal law didn't allow then-President Donald Trump's administration to authorize that requirement in Arkansas. That ruling has been appealed to the U.S. Supreme Court.

President Joe Biden's administration recently asked the U.S. Supreme Court to cancel March 29 oral arguments in the case, saying that it has "preliminarily determined" that the work-related requirements would "not promote the objectives of the Medicaid program."

In recent years, foes of the Arkansas Works version of Medicaid expansion have argued that the state should offer the Medicaid expansion health care coverage through the traditional Medicaid fee-for-service program rather than private health insurance plans because it would be less costly.

The Department of Human Services estimates that the new ARHOME waiver program would bring an estimated $9.76 billion from the federal government into the state's economy for the next five years.

If Arkansas paid fee-for-service rates instead, the federal government would send an estimated $6.75 billion to the state -- a reduction of $3.01 billion over the five-year period -- according to the department. That would mean significantly lower payments to hospitals, doctors and other health care professionals.

If Arkansas paid fee-for-service rates through the ARHOME waiver program, the state would spend $180 million less, the department estimates. But the $3 billion in lost federal revenue would leave the state with $310 million less in state and local tax revenue generated, more than offsetting the reduction in state Medicaid spending, according to the department.

Because the annual appropriation for the Division of Medical Services, which includes spending authority for the Medicaid expansion program, must be approved by a three-fourths majority of the Legislature each year, the program faces an annual challenge in the Republican-dominated body.

Dennis Smith, senior adviser for Medicaid and health care reform at the state Department of Human Services, told the Senate Public Health, Welfare and Labor committee last week that the current Medicaid expansion program allows cost-sharing for program enrollees with incomes above 100% of the federal poverty rate, and the proposed program also would also allow the cost sharing.

There is an overall cap of 5% household income for cost sharing under the program, he said, and the private health insurance plans will track the cost sharing to make sure that their members don't pay more than 5% of their incomes.

After the Senate approved SB410, Hutchinson called it an "important moment."

"This new initiative will assure continued health care coverage for over 300,000 Arkansans with accountability measures in place to improve maternal health, drug addiction support and mental illness," the Republican governor said in a written statement.

"I applaud Senator Missy Irvin, Representative Michelle Gray and many other legislators who spent countless hours in working with my administration to develop this plan that will now move to the House."