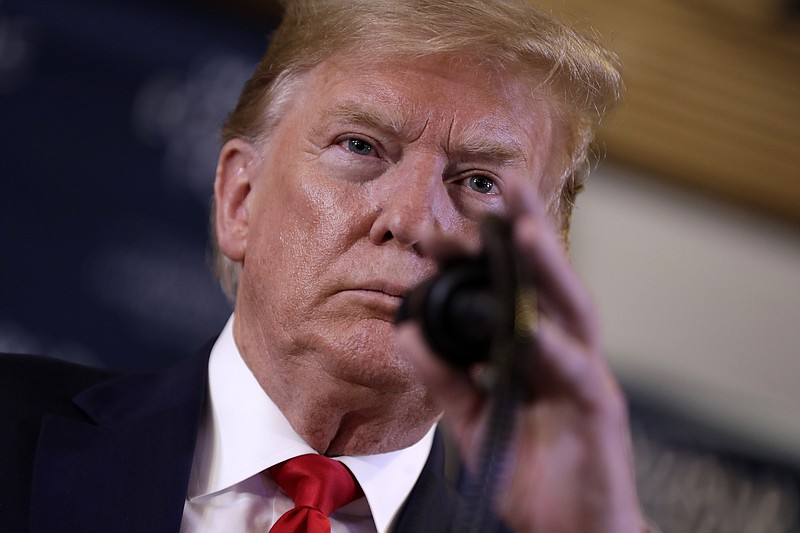 WASHINGTON -- Former President Donald Trump is giving his "Complete and Total Endorsement" to several Republican allies, including three from Arkansas, but he's warning others in the party not to use his name or likeness without his permission.

This week, the ex-president declared his support for U.S. Sen. John Boozman of Rogers, writing: "Senator John Boozman is a great fighter for the people of Arkansas. He is tough on Crime, strong on the Border, a great supporter of our Military and our Vets, and fights for our farmers every day. He supports our Second Amendment and has my Complete and Total Endorsement!"

On Friday, Trump backed Lt. Gov. Tim Griffin's bid for state attorney general, calling him "a highly respected Army Veteran who will always fight for the great people of Arkansas."

On Jan. 25, he threw his support behind former White House press secretary Sarah Huckabee Sanders, stating that Sanders "is a warrior who will always fight for the people of Arkansas and do what is right, not what is politically correct."

University of Arkansas political science professor Janine Parry said the endorsements will help the candidates with fundraising while also discouraging other Republicans from entering the race.

"These Republicans are showing that they wear the right brand," she said.

Given Arkansas' Republican tilt, "all that matters is the primary, so this is valuable," she said.

Despite losing the White House in November, Trump continues to have a loyal base in the Natural State.

"The people I hear from still greatly admire President Trump. They think he was perhaps the best president we've ever had [and] accomplished more than any other president in our lifetimes," said Republican Party of Arkansas Chairwoman Jonelle Fulmer.

Trump's support is helpful in Arkansas, "especially right out of the box," she said.

While Trump's backing helps, it's a long time between now and 2022, she noted.

"There's going to be a lot of work that goes into the primary campaigns and the general campaign. By the end, the endorsement isn't new anymore," she said.

Ultimately, she said, "the grassroots campaigns are going to pay off."

"Right now, [Trump is] certainly the most highly regarded figure in the national Republican Party, and seems anxious to assert his post-presidential party leadership in a very aggressive, aggressive fashion," Bass said.

Trump's recent endorsements came as he was distancing himself from some of the party's traditional fundraising apparatus.

In a written statement Tuesday, he doubled down, saying donations to his own political action committee won't be used to support Republicans In Name Only.

"I fully support the Republican Party and important GOP Committees, but I do not support RINOs and fools, and it is not their right to use my likeness or image to raise funds. So much money is being raised and completely wasted by people that do not have the GOP's best interests in mind," he said. "If you donate to our Save America PAC at DonaldJTrump.com, you are helping the America First movement and doing it right. We will WIN, and we will WIN BIG! Our Country is being destroyed by the Democrats!"

Boozman, who formally announced his reelection candidacy over the weekend, was not available Tuesday to discuss Trump's endorsement, spokesman Matthew Wester said.

But in a written statement, the senator highlighted his work with the previous administration.

"President Trump and I worked together to grow the economy, secure the border, defend the Second Amendment and protect life. Together we rebuilt the military, stood up for our veterans, helped farmers through challenging times and reshaped the judiciary," Boozman said.

"I'm proud of that record and am grateful for the president's support," Boozman added.

In a text message, Sanders portrayed Trump's backing as helpful.

"President Trump continues to be the most influential voice in Republican politics and I appreciate his continued confidence in me and support for strong conservative leaders in Arkansas," she wrote.

In a written statement, Griffin expressed appreciation for the endorsement.

"I am honored to have President Trump's support in the race for Attorney General. I admire his determination to keep the promises he made to enact conservative policies, especially nominating judges who understand their role is to interpret the law, not make it," he said.

Since leaving office on Jan. 20, Trump has offered his support to several other Republicans.

U.S. Sens. John Kennedy of Louisiana, Tim Scott of South Carolina, Jerry Moran of Kansas and Mike Crapo of Idaho all received Trump's backing after voting to acquit him of inciting insurrection.

"We know from polling and from his performance back in November, Donald Trump is very well liked here. He's very popular. An endorsement from him is really going to be helpful," Oldendick said.

With Trump in his corner, it "makes it look like McMaster should have a fairly easy road to victory," he added.

Markie McBrayer, a University of Idaho political science professor, said the endorsement is good news for Crapo, lessening the chances he'll face a primary challenge from the right.