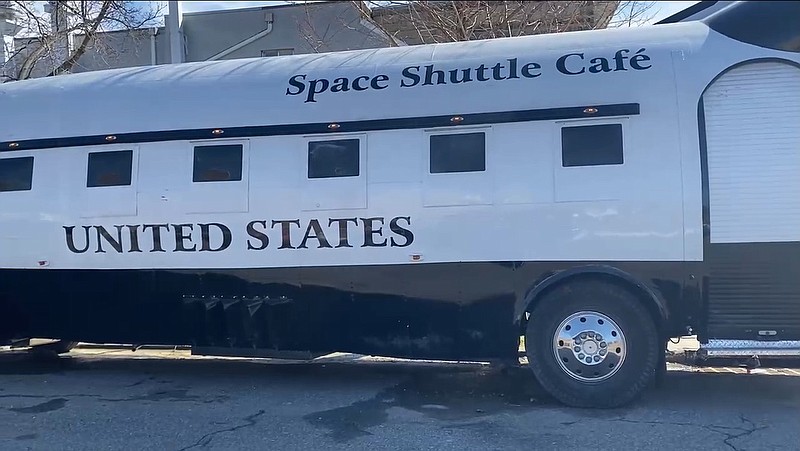 The Space Shuttle Cafe, built from the fuselage of a DC-3 with a full kitchen inside, could soon be on its way to Arkansas as a mobile unit for Minute Man. (Special to the Democrat-Gazette)

Minute Man CEO Perry Smith says his company has acquired a new mobile unit that's, almost, out of this world.

The Space Shuttle Cafe is 39 feet long, 8 feet wide and 11 feet tall, built out of the fuselage of a DC-3 that saw service during World War II and thereafter plied the East Coast as a commercial airliner. After its retirement, it was converted into a mobile home and subsequently a hospitality vehicle and attraction for special events; in the 1990s it was converted again with specifications and details based on the Challenger Space Shuttle; and in 2015 it got another upgrade, to a full commercial food-service kitchen.

However, Smith says, "Officially, the Space Shuttle is not yet clear for launch." His plans to bring it down from the New York metro area on a flatbed truck last week have been put on hold after two shipping companies decided the vehicle configuration made it too difficult. As of our Tuesday deadline, Smith says, the job is out for rebid and he's hoping they'll get it here in, best case, 4-7 days. (The actual space shuttles, if you recall, traveled across the country from their California landing strip to Florida launch point piggybacking on a Boeing 747. If Smith chooses to go that way, it could land at Little Rock Air Force Base, practically on the doorstep of Minute Man's Jacksonville restaurant/headquarters.)

[Video not showing up above? Click here to watch » https://www.youtube.com/watch?v=XF_CUwacbNw]

What will be officially called Space Shuttle Cafe ... Powered by Minute Man will join one currently operating food truck with one in the works, expanding the total Minute Man fleet to three. Smith reiterates his goal of bringing Minute Man back to some of the smaller Arkansas communities that used to have a Minute Man restaurant. Meanwhile, you'll be able to book it for appearances and private functions, including, say, office luncheons, wedding and birthday parties, tailgates and apartment complex celebrations via minutemanburgers.com.

Shorty Small's, 11100 N. Rodney Parham Road, Little Rock, which shut down temporarily in mid-January for what the voicemail message described as "a few weeks," reopened last week — after a few weeks. "Now serving PRIME RIB!," according to a Facebook blast to customers. Hours are back to 11 a.m.-8 p.m. Wednesday-Sunday. The phone number is (501) 224-3344.

Starting today, every second and fourth Thursday for the foreseeable future, food trucks will set up from 11 a.m.- 3 p.m. (or until vendors sell out) on the south lot of OrthoArkansas, 800 Fair Park Blvd., Little Rock, for Ortho Eat and Go. Today's trucks: Shobo's Kitchen, Cheesecake on Point and Crepe Coop. OrthoArkansas will match patrons' donations to a charity the company will choose for each session — today's is Arkansas Hunger Relief Alliance. Folks can take their food with them or eat there at picnic tables. Details, including which trucks will be on hand when — OrthoArkansas is actively seeking more food trucks — are at orthoarkansas.com/eat-and-go.

A resident of the 12 Star Flats, directly above the former Cathead's Diner at 505 Shall Ave., Little Rock, reports construction has started on a new restaurant in that space. We don't yet know what. A Rock City Eats report from last summer around the time Cathead's closed speculated that Beasley Properties, which owns Bones Chophouse restaurants in Hot Springs and Little Rock and last year bought McClard's Bar-B-Q, was working on a Little Rock location in that spot. No, we can't confirm that. Yes, we will continue to monitor it.

And speaking of McClard's Bar-B-Q, it's opening its first location outside of Hot Springs on April 1 at 5001 W. Pauline Whitaker Parkway in Rogers; this will be its first expansion in more than 92 years (if you don't count its still-new food truck). The restaurant will add "new features like brunch, a full bar and event catering," to the Hot Springs menu, which focuses on barbecue pulled pork, wet and dry ribs, and Delta-style tamales. We're awaiting additional details, including the operating hours. The restaurant phone number is up and running — (479) 202-4269; the website is mcclardsnwa.com.

We now have a tentative opening target — mid-April — for Blue Heaven, going into the former Ed and Kay's at 15228 Interstate 30 North, Benton. The restaurant has posted on its Facebook page as a temptation preview photos of several appetizer items, including coconut shrimp, potato wedges, fried artichoke hearts, onion rings, crab cakes, corn and shrimp fritters, a hummus plate and a seasonal charcuterie board.

On the heels of our reporting last week that an outlet of the Red Hook Seafood & Bar is going into the former New China building, 2104 Harkrider St., Conway, we now have word that another outlet is headed for Hot Springs — specifically, 4510 Central Ave., possibly coincidentally, also formerly New China. We also admit to not quite doing our homework properly — there are eight locations total, six in Tennessee, four of those actually in Memphis (the other two are in Jackson and Bartlett), one in San Antonio and one in Southaven, Miss. We still have not received an answer by deadline to attempts to contact chain headquarters. Check out the menu at redhookseafood.com.

Just as you were reading here last week about the fire at Jones' Bar-B-Q Diner in Marianna that pretty much destroyed the James Beard Award-winning restaurant's pit area, the "main" paper carried a report that James "Mr. Harold" Jones, bolstered by an outpouring of support, moral and financial, from the community and across the country, expects to have the place fixed up and reopened within the month. The building containing the pit will be of metal, not wood, as previously. There was some water damage from fire hoses to the kitchen. The back of the restaurant suffered some damage but not the front dining area, where his James Beard award hangs on the wall along with photographs of tractors and other decor.

Cache chef Payne Harding and Nicholas Hebert, a recent transplant to Pine Bluff from Fullerton, Calif., where he was a personal chef, are competing in the Favorite Chef competition for a top prize of $50,000 and a feature in Bon Appetit magazine. Hebert says he's hoping to open a barbecue ribs-seafood restaurant in the Pine Bluff or southwest Little Rock area, with a tentative menu blending Latin and Deep South influences. Voting wraps up today; the winner will be announced April 8. Vote for Harding at favchef.com/2021/payne-harding; vote for Hebert at favchef.com/2021/nicholas. 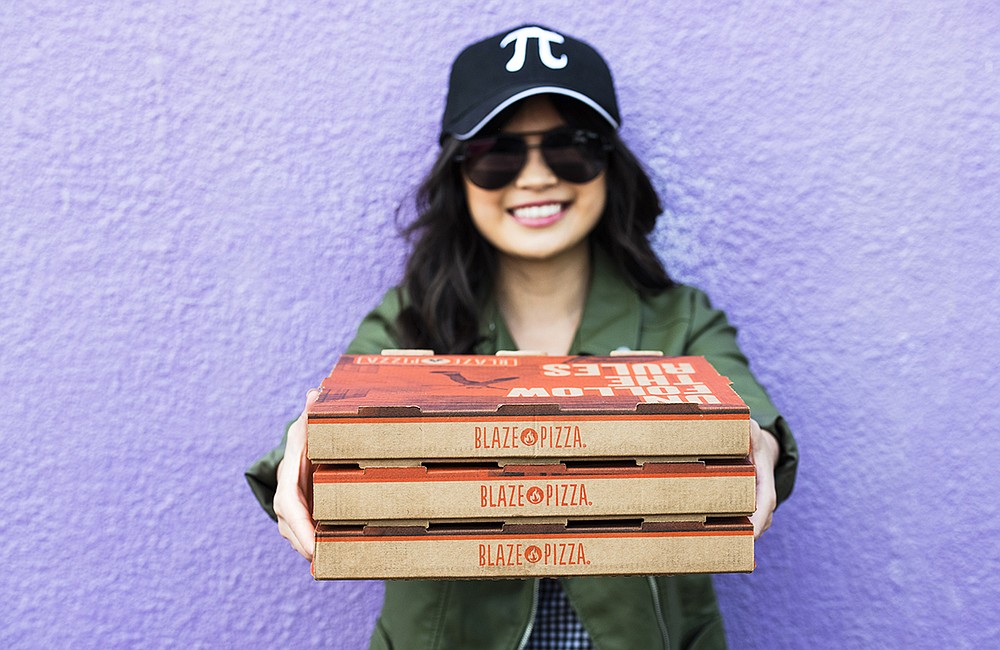 Blaze Pizza outlets in Conway and Little Rock will offer 11-inch pies with unlimited premium toppings for $3.14 on Sunday, which is Pi Day. (Special to the Democrat-Gazette)

Pi are round: Sunday is Pi Day — so designated because March 14, or 3/14, represents the first three digits of the irrational number Pi (3.14159 etc.). Pizzerias usually take advantage with promotions; for example, for its eighth annual Pi Day celebration, Blaze Pizza, at its 340-plus restaurants throughout the country, including in Conway and Little Rock, is offering 11-inch pies with unlimited premium toppings for $3.14. The promotion is being extended through April 12. You're supposed to use their app to get the promotional price. Find a location and details at blazepizza.com.