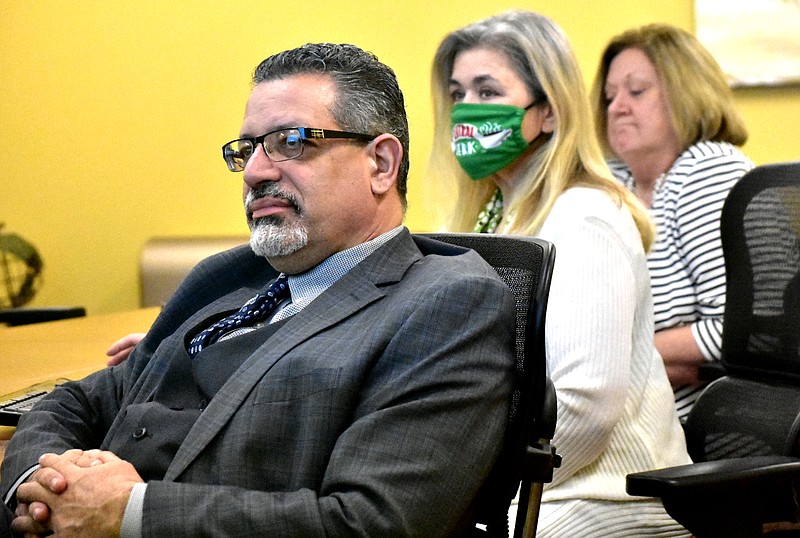 Southeast Arkansas College President Steven Bloomberg (left) listens to board members and campus officials via teleconference during a board meeting at the college on Wednesday, March 10, 2021. (Pine Bluff Commercial/I.C. Murrell)

Today marks one year since Southeast Arkansas College went into an emergency protocol against a disease the World Health Organization declared that day as a pandemic.

"We were notified by [Jefferson Regional Medical Center] at approximately 11:20 a.m. on March 11, 2020, that we had students exposed to the first individual who tested positive for covid-19 in Arkansas," said Steven Bloomberg, the college's president. "It was a difficult circumstance because everyone knew so little about it."

Three nursing students undergoing clinical classes at the hospital were exposed to the patient while engaging in what a respiratory technician would do, Bloomberg said. SEARK officials evacuated the campus, not knowing what other classes or what buildings the students attended that day.

"We went into incident command by noon that day," Bloomberg said. "We isolated those students and their process, and then we worked with Arkansas Department of Health to figure out what the next steps were because it was so new that all the protocols we're used to now -- contact tracing, quarantining -- none of that was in place in the state yet, but it was literally going moment by moment trying to figure out how to allay the fears of people who were now in this classroom, and obviously with social media, they know the campus is now empty and making sure we maintain communication with the governor's office and the department of health.

"The good news is that we were as prepared as we could be for several months. We knew the day would come when coronavirus would affect our operations."

Bloomberg added he didn't know SEARK College would be the first higher-learning institution in Arkansas to employ covid-19 protocol.

Rob Cheatwood, chairman of the SEARK College board, recalled a worrisome time in recent history.

"It was unsettling but it was new," he said. "We didn't know to be unsettled. There was something happening. We had to pivot, and Mr. Bloomberg did an excellent job. We were all notified immediately. Communication was wide-open, and we followed what guidelines, be it the [Centers for Disease Control and Prevention], the health department or the hospital. Every input we could get, we took into account and we made changes."

Covid-19 had similar effects on colleges and universities in America and around the world, including the start of virtual learning. SEARK, however, reopened in-person classes in August as another learning option.

Two months into the traditional spring semester, health authorities and public officials believe the light at the end of a yearlong tunnel is near, and SEARK College has exceeded its target numbers for enrollment and credit hours registered.

"That is great news, especially during a pandemic," board trustee Marc Oudin said. "We have struggled to get our numbers up. To see these numbers up is quite a relief."

Bloomberg said exceeding the targets is critical because the college community is given trust that officials are doing what's right.

"Despite these myriad challenges, we're continuing to move forward," Bloomberg said. "The one thing I did not want to do was stop growing because of fear. As you know, during this pandemic, fear can be paralyzing. The very first time we dealt with this pandemic a year ago, we didn't want our institution to be paralyzed by fear. We wanted to give people the facts. We wanted people to know everything that was going on with it, but we also knew we needed to innovate. Innovation can be difficult when you're faced with such austere circumstances, but I knew from my perspective all this moment we built up prior to the pandemic, we had to find a way to sustain it, knowing we couldn't do the same things we used to do."

Three years into leading SEARK, Bloomberg could have his doctorate by Friday. That's when he is defending a dissertation to the American College of Education on a phenomenological study of servant leadership and socioeconomically disadvantaged college students.

"I took a group of college students at SEARK and I measured what they knew about servant leadership," Bloomberg said. "I actually designed a servant leadership class because the problem I identified was, no college in Arkansas teaches a class on servant leadership. So, I designed a custom curriculum. I interviewed these students in individual interviews before the class, took them through the class and did focus groups to measure how much they gained, and so I've designed a class we'll now offer at any institution in Arkansas to any school that adopts it, and we're now teaching it as part of our curriculum."

In personnel news, Lozanne Calhoun was promoted to acting vice president for student affairs since the January board meeting.