Pandemic's drama made for odd year 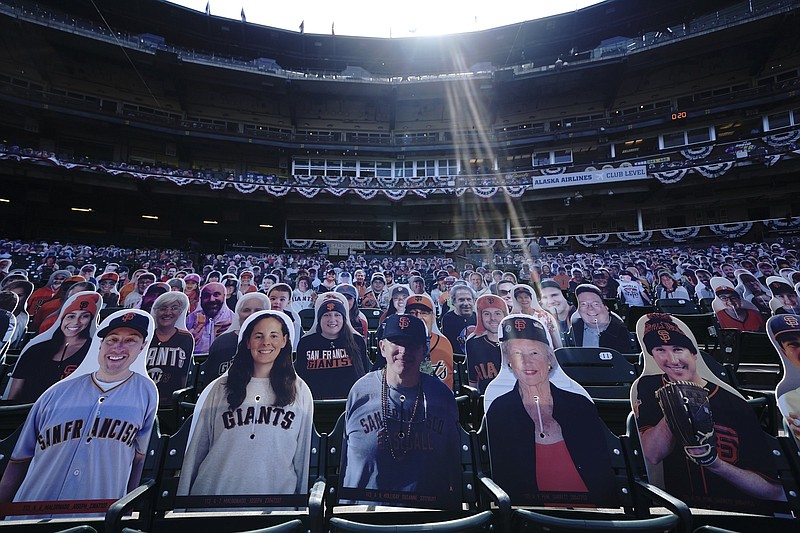 FILE - Cardboard cutouts of fans sit in seats at Oracle Park before a baseball game between the San Francisco Giants and the San Diego Padres in San Francisco, in this Tuesday, July 28, 2020, file photo. Fake sounds simulated clapping or yelling. Sometimes it worked. Sometimes it didn't.(AP Photo/Jeff Chiu, File)

Sports amid the pandemic became a whole different sort of spectacle, especially when it came to spectators -- often with zero, sometimes with some and, in at least one instance at a Grand Slam tennis tournament, starting a match with fans in the seats yet finishing it with none present.

Screams and chants, applause and dancing, cheering and jeering by tens of thousands in the stands were so customary and unremarkable at the various athletic endeavors previously that they tended to recede into the background as not much more than white noise.

Over the past year, though, thanks to the contagiousness and dangers of the coronavirus, such sights and sounds were replaced at cavernous venues by the echoes of a bouncing ball or the squeaks of sneakers or "Did he really say that?" chatter among players, coaches and officials that suddenly was audible.

And, truly, the entire essence of sports as we know them changed in subtle, if fundamental, ways during the past 12 months because of restrictions on crowds. For those who were no longer able to enjoy being right there, of course -- how many kids missed out on a chance to witness a game firsthand for the first time? -- but also for those viewing from afar and even for the participants themselves.

If a contest happens without anyone delighting in the athleticism or praising and booing the athletes and the outcomes, does the whole undertaking matter as much? Decreased television ratings across the landscape, even for a juggernaut such as the Super Bowl, seemed to indicate not.

"It was very weird at first, when the season started, and like everything else, you kind of got used to it. Which is not a good thing," said Will Harris, a relief pitcher for the Washington Nationals, who like all teams in Major League Baseball, played every regular-season game of a shortened 2020 season with zero spectators. "To be honest, it'll probably be a little weird when the fans are back in the stands, because a lot of us have kind of gotten used to it being the way that it was last year. The adrenaline might be a little higher than normal when we do see [them]. I'm looking forward to it."

Athletes in individual sports, so accustomed to being fueled by on-site energy and support, needed to adapt and rely on their inner voices.

TV viewers couldn't always tell the difference between what was real and what was artifice. Broadcasters tried to keep viewers engaged and, ultimately, hoped to accomplish a sense of normalcy.

Harris' Nationals are still awaiting word from the city government on whether they'll be able to open their gates April 1, MLB's opening day. Nearly every other baseball team already has the go-ahead to allow some fans.

That's part of a trend as vaccine distribution increases and covid-19 cases and fatalities decrease.

Many arenas are letting smaller-than-usual audiences return for NBA or NHL games. The NFL season culminated with about 22,000 people -- roughly a third of stadium capacity -- at last month's Super Bowl in Florida.

All in all, it's been a time of uneasiness, uncertainty and the unknown.

Never was that better illustrated than at the Australian Open, the first Grand Slam tennis tournament in a year to let in more than 1,000 spectators daily.

A covid-19 outbreak in Melbourne -- well, what amounted to an "outbreak" in Australia, about a dozen cases -- led to a five-day lockdown that began in the first week of the two-week event; competition continued, but spectators were barred.

Because the ban took effect at midnight, and No. 1 Novak Djokovic happened to be playing a match right then, his contest was halted for 10 minutes in the fourth set while ushers cleared booing fans out of Rod Laver Arena.

So, no one was there to see, celebrate or congratulate Djokovic after he wrapped up his victory about an hour later. 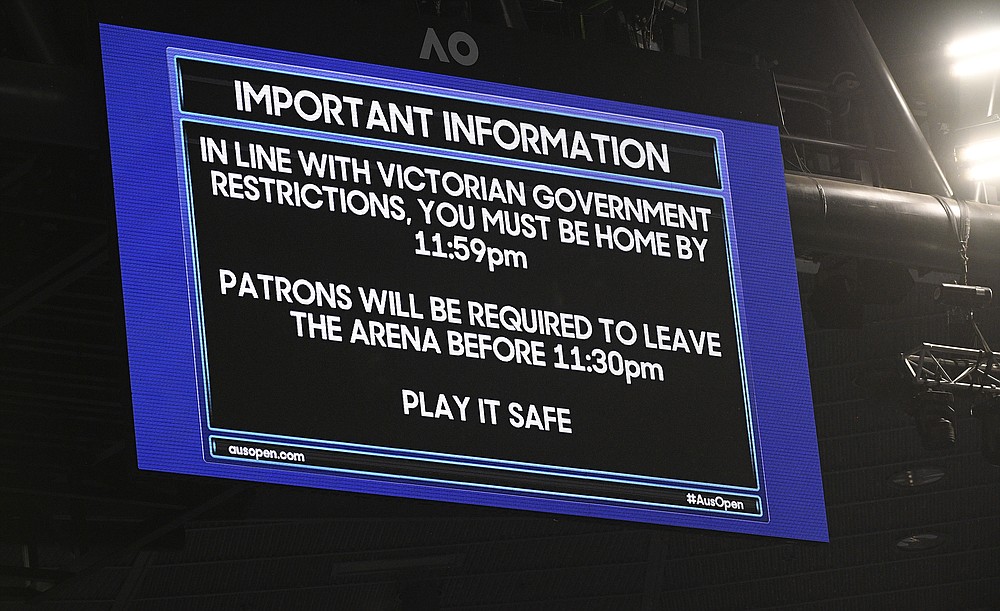 FILE - An electronic signboard on Rod Laver Arena reminds patrons about the lockdown start time during the third round match between Serbia's Novak Djokovic and United States' Talyor Fritz at the Australian Open tennis championship in Melbourne, Australia, in this Friday, Feb. 12, 2021, file photo. Sports amid the pandemic became a whole different sort of spectacle, especially when it came to spectators — often with zero, sometimes with some and, in at least one instance at a Grand Slam tennis tournament, starting a match with fans in the seats yet finishing it with none present. (AP Photo/Andy Brownbill, File) 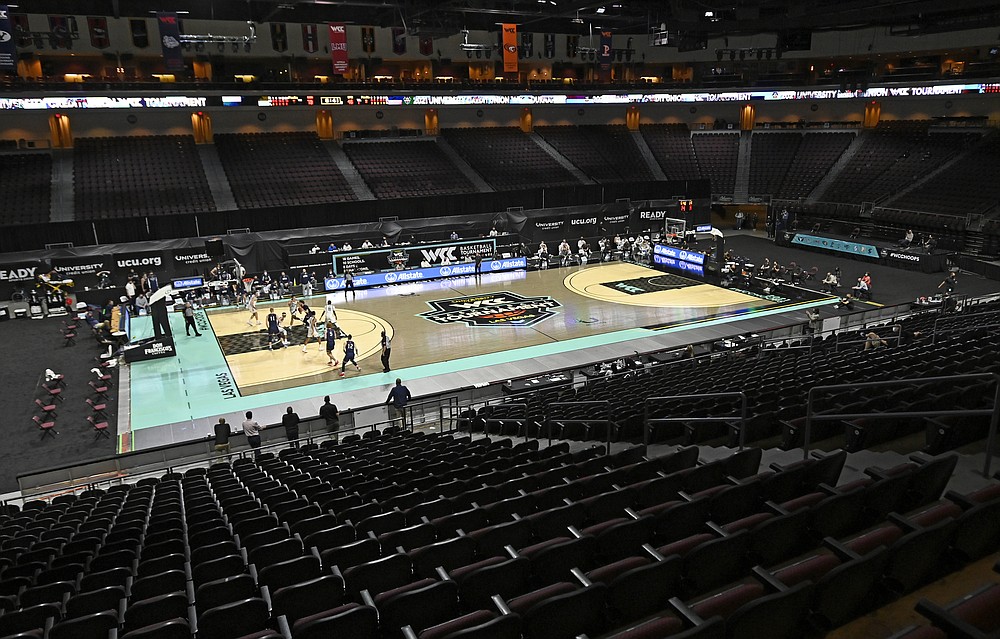 Gonzaga plays Saint Mary's with no fans in attendance during the second half of an NCAA semifinal college basketball game at the West Coast Conference tournament Monday, March 8, 2021, in Las Vegas. (AP Photo/David Becker) 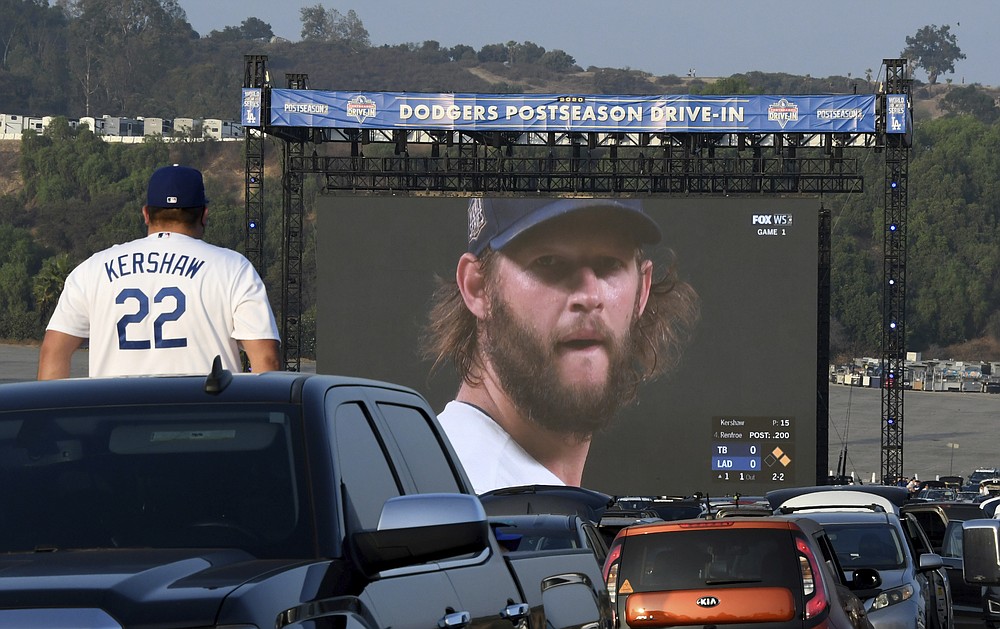 FILE - A fan watches the World Series Game 1 between the Tampa Bay Rays and the Los Angeles Dodgers in the parking lot of Dodger Stadium in Los Angeles in this Tuesday, October 20, 2020, file photo. Sports events held amid the coronavirus pandemic have become a whole different sort of spectacle when it comes to spectators.(Keith Birmingham/The Orange County Register via AP, File) 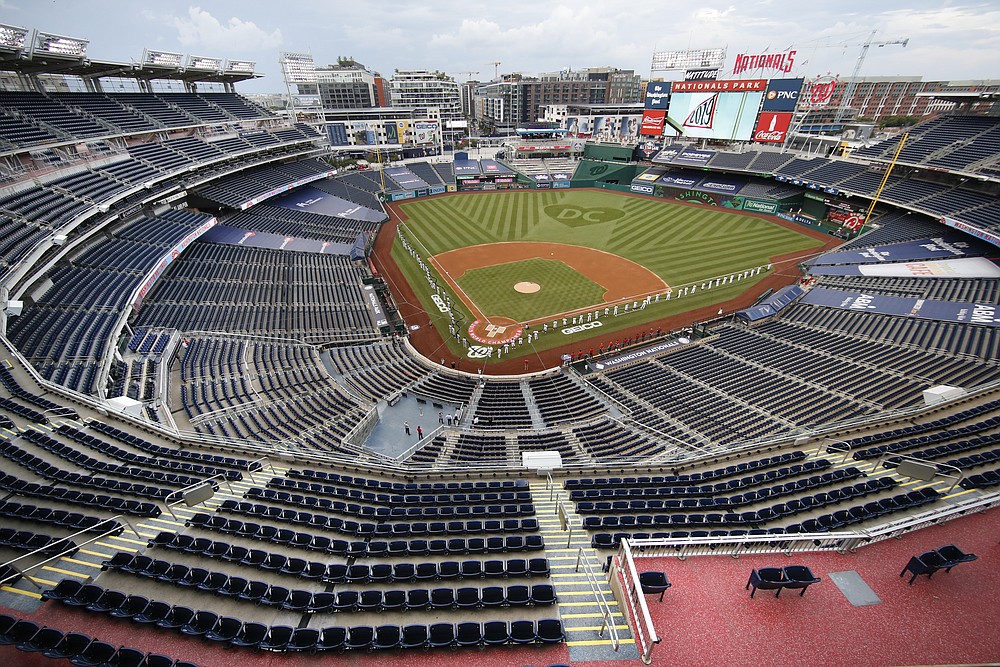 FILE - The New York Yankees and the Washington Nationals stand on the field before their opening day baseball game with no fans in the seats at Nationals Park in Washington, in this Thursday, July 23, 2020, file photo. Sports events held amid the coronavirus pandemic have become a whole different sort of spectacle when it comes to spectators. (AP Photo/Alex Brandon, File) 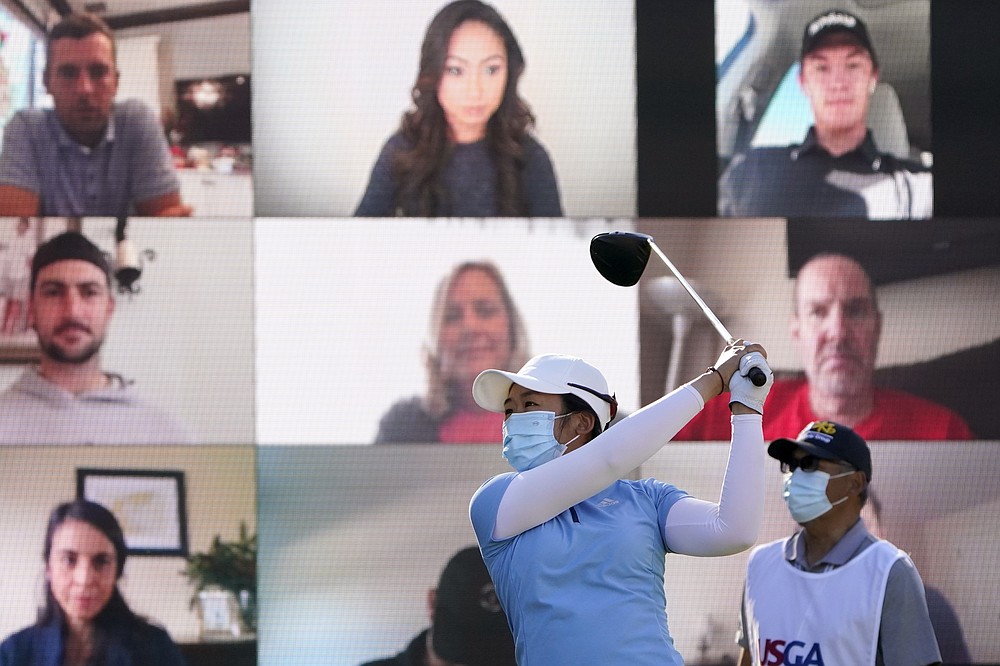 FILE - Jing Yan, of China, hits off the first tee as virtual fans, rear, look on during the first round of the U.S. Women's Open golf tournament in Houston, in this Thursday, Dec. 10, 2020, file photo. (AP Photo/Eric Gay, File) 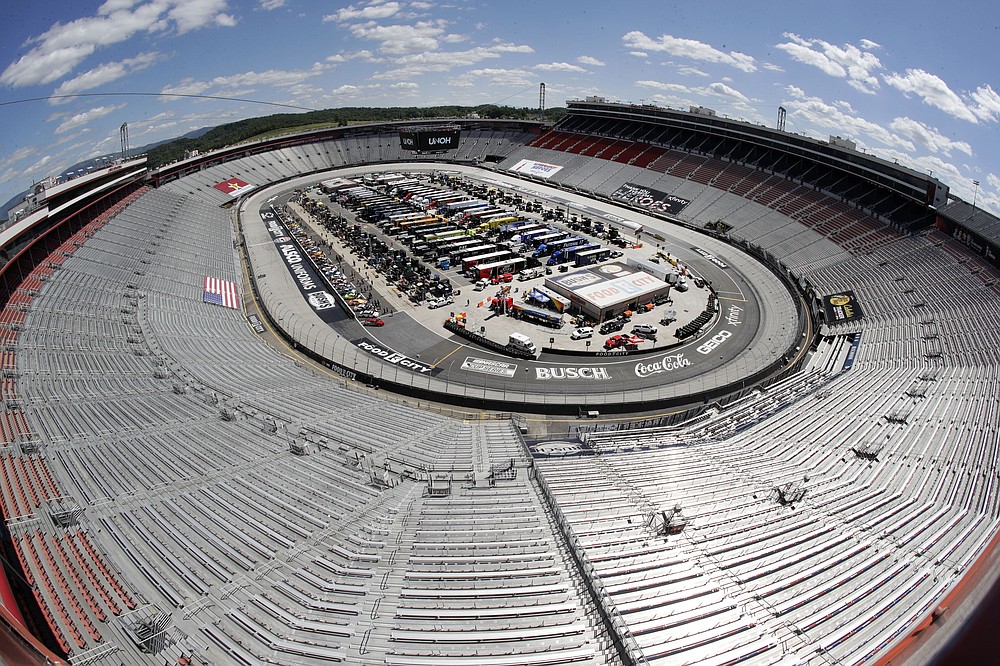 FILE - The stands sit empty as drivers prepare for the start of a NASCAR Cup Series auto race at Bristol Motor Speedway in Bristol, Tenn., in this May 31, 2020, file photo. Sports amid the pandemic became a whole different sort of spectacle, especially when it came to spectators — often with zero. (AP Photo/Mark Humphrey, File) 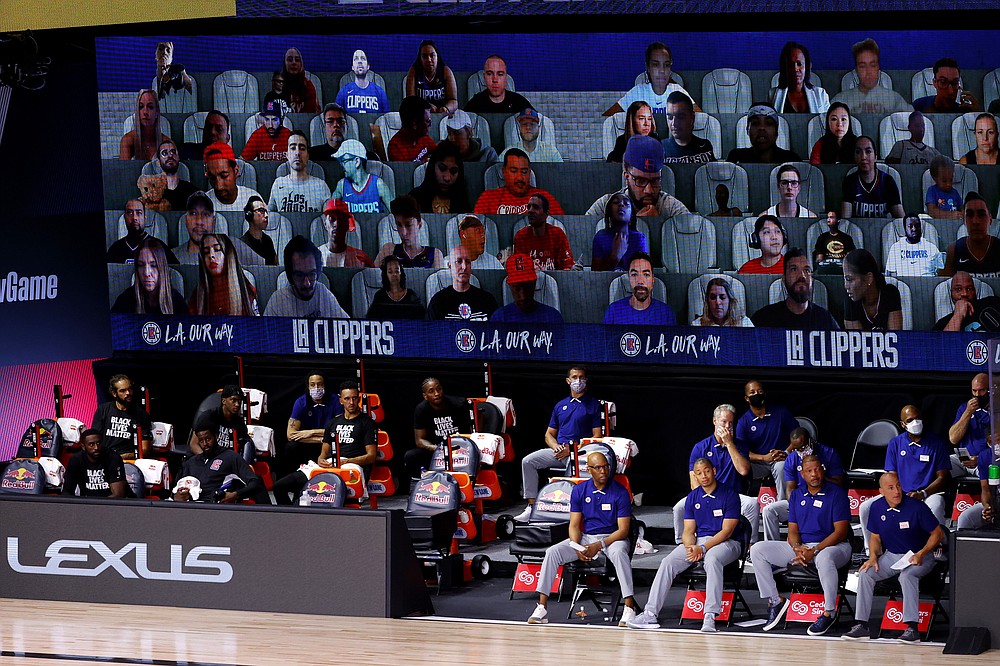 FILE - This Tuesday, Aug. 4, 2020, file photo shows a view of the Los Angeles Clippers bench and fans on a screen during the first half of an NBA basketball game against the Phoenix Suns in Lake Buena Vista, Fla. The entire essence of sports as we know them changed in subtle, if fundamental, ways during the past 12 months because of restrictions on crowds. (Kevin C. Cox/Pool Photo via AP, File) 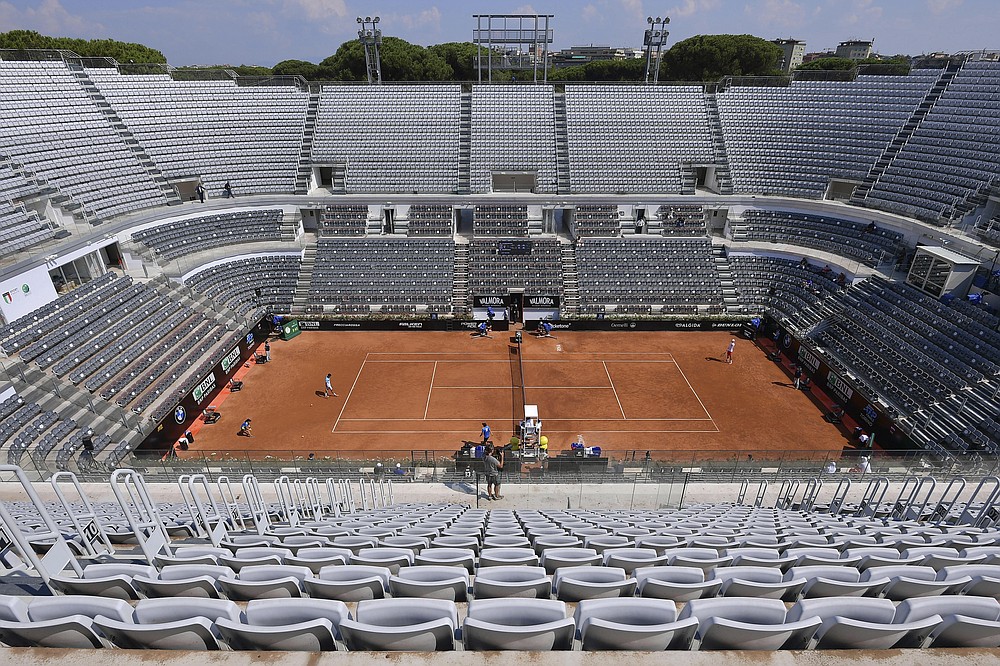 FILE - The stands around the Central Court of the Foro Italico are empty during a match between Serbia's Novak Djokovic and Italy's Salvatore Carus, at the Italian Open tennis tournament in Rome, in this Wednesday, Sept. 16, 2020, file photo. (Alfredo Falcone/LaPresse via AP) 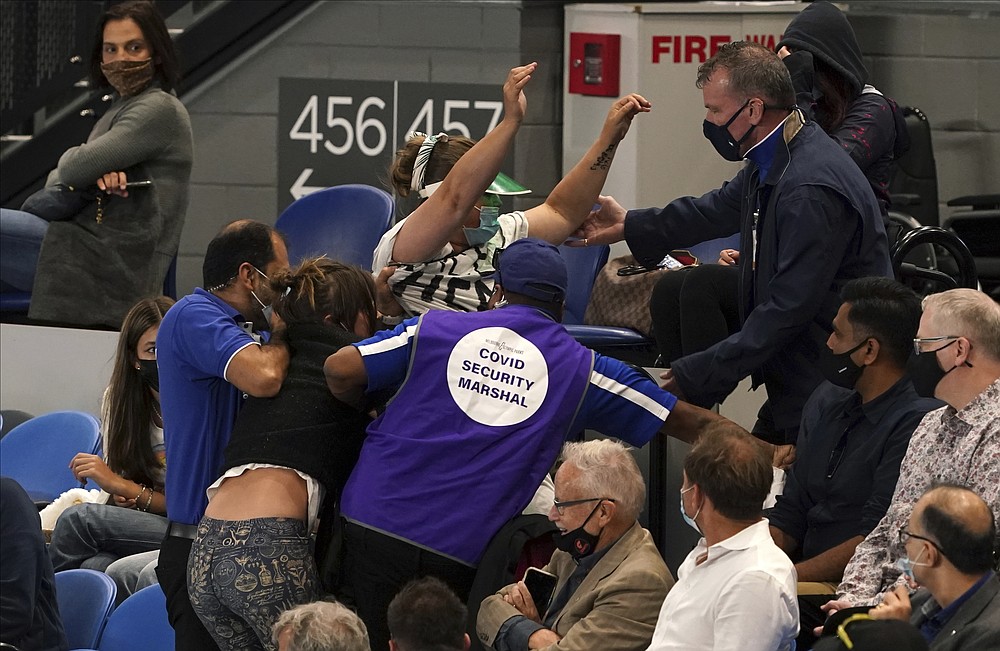