Transgender-restriction bills move ahead in state 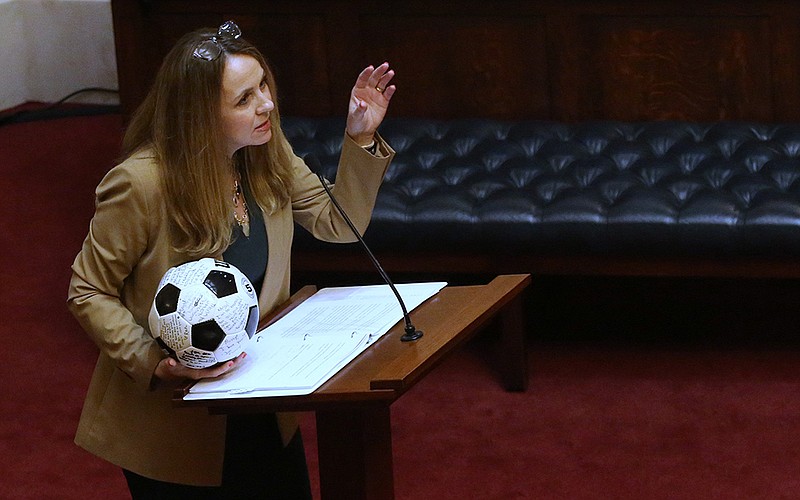 A bill aimed at deterring Arkansas' schools from allowing transgender athletes to participate in girls' and women's sports won the approval of the Arkansas Senate on Wednesday.

On the other side of the state Capitol, the Arkansas House of Representatives approved a bill that would ban gender transition treatment, which can include sex reassignment surgery and hormone therapy, for minors.

Proponents of the bills described the measures as common sense, while their opponents described the bills as discriminatory and dangerous to a vulnerable segment of the state's young people.

These actions came on the 59th day of the 93rd General Assembly's regular session.

The 35-member Senate voted 28-7, largely along party lines, to approve the bill aimed at keeping Arkansas schools from allowing transgender athletes to participate in girls' and women's sports. Senate Bill 354, by Sen. Missy Irvin, R-Mountain View, now moves to the House for further action. Democratic Sen. Larry Teague of Nashville joined 27 Republicans in voting for the bill, while independent Sen. Jim Hendren of Sulphur Springs and six Democrats voted against it.

SB354 would allow students "deprived of an athletic opportunity" or suffering "direct or indirect harm" as a result of a kindergarten-through-12th-grade school or higher-education institution not maintaining separate teams for cisgender female students to seek injunctive relief against the school, as well as monetary damages.

Supporters of the bill and of national efforts to keep transgender participants out of girls' and women's sports said it's unfair for cisgender girls and women to compete against athletes who were assigned the male gender at birth.

The legislation has drawn opposition from LGBTQ-rights advocates, who said that it discriminates against young transgender people.

"I personally have not been contacted or personally know about a situation currently in Arkansas," Irvin said Wednesday in a text message to the Arkansas Democrat-Gazette when asked if she has heard of transgender girls playing girls sports in Arkansas.

"Just because there may or may not be that instance happening today, it could happen tomorrow or next week," she said.

Irvin told her colleagues in the Senate that "this bill is designed to create fairness in women's sports."

Title IX is designed to stop discrimination against females and create equal athletic opportunities for women, she said.

The Senate bill is aimed at ensuring that girls in Arkansas will compete on a level playing field, Irvin said.

"Why would we want to destroy nearly 50 years of gains in equal athletic opportunity for women under Title IX?" she asked.

On Monday, Irvin was joined by Matt Sharp, senior counsel with Alliance Defending Freedom, a faith-based advocacy group, in presenting the bill to the Senate Education Committee before it cleared the panel in a 5-3 vote.

Sharp is representing four cisgender female athletes in Connecticut in a federal lawsuit challenging a state policy that allows transgender students to participate as their identified gender. The litigation was filed about after two transgender runners combined to win 15 championship races.

"We do a disservice to the people of our state and even this country when we support things that are not based in science," Sen. Jason Rapert, R-Conway, said.

But Sen. Clarke Tucker, D-Little Rock, told senators, "I do believe that this law, if it is passed, we would be illegal.

"That word 'sex' in the federal Civil Rights Act prohibits discrimination on the basis of sexual orientation or gender identity," he said. "I think the notion that young girls need our protection, but not your boys, is demeaning to women.

"This bill targets kids who we know who are having a very hard time in high school, and this will only make their lives harder," he said.

Senate Democratic leader Keith Ingram of West Memphis said, "This [bill] wasn't on my radar, I don't know about yours, when this session started.

"Don't let the headline dictate your vote here. Please resist the headline and take care of the most vulnerable kids that we have," he said.

In response, Irvin said, "There has been a lot talk about transgender" by Democrats opposed to her bill, "and that's appropriate. But there is no talk and there is no headlines for our girls. ... So we go down the path of talking about leaving people out; what about the girls?

Irvin said, "A person's feeling should not override another person's rights, and this bill is common sense.

"It is appropriate. It is the right thing to do for the girls and the women in this state," she said.

Arkansas is one of more than 20 states whose lawmakers have introduced bills to prevent transgender students from competing on girls' and women's school sports teams, according to The Associated Press.

Mississippi is on track to become the first state this year to enact such a law.

Idaho was the first state to enact a law to curtail transgender students' sports participation, but the 2020 measure is blocked by a court ruling.

Meanwhile, the House voted 70-22 to approve the measure that would ban gender transition treatment for minors. That measure is House Bill 1570, by Rep Robin Lundstrum, R-Elm Springs.

Lundstrum equated those procedures to "chemical and surgical" mutilation that children should be protected from -- a statement that opponents of the bill, transgender Arkansans and medical professionals specializing in their care said was untrue when testifying at Tuesday's committee meeting.

"These kids deserve love. They are precious," Lundstrum said. "They deserve love and attention, which is why they should wait until they're 18 to make a decision impacting the rest of their life."

In response to a question from Rep. Tippi McCullough, D-Little Rock, Lundstrum said that though no parents of transgender Arkansas children testified for the bill in committee, "that doesn't mean they're not for this bill." Asked about health care professionals with experience and expertise, Lundstrum said there are "plenty" who support the legislation.

Those against the bill said receiving those services is essential to those children's mental health, adding that it isn't done without a great deal of consideration.

Rep. Nicole Clowney, D-Fayetteville, noted that about half of transgender young people said they had attempted suicide, according to the American Academy of Pediatrics.

"We also know that support and medical interventions do bring down these suicide rates," Clowney said. "Denying them care makes them more likely to attempt and successfully commit suicide. So many people in this state need our help with housing, with jobs, with food, but we are again talking about another marginalized community and how we can make life harder for them."

Sex reassignment surgery is not provided to minors in Arkansas. Lundstrum said Tuesday that the bill draws "a line in the sand." She was joined by Joseph Backholm with the Family Research Council, a conservative group based in Washington, D.C.

There are gender clinics at the University of Arkansas for Medical Sciences and Arkansas Children's Hospital. Both provide hormone treatment and other therapies.

Supporters of the bill have pointed to side effects of those drugs, while opponents said fears about those treatments are rooted in misinformation.

Rep. Jim Wooten, R-Beebe, likened transgender young people to children who want to pretend to be animals by wearing tails to school, while Rep. Mary Bentley, R-Perryville, cited a Bible verse from the Old Testament that calls women who wear men's clothing or men who wear women's clothing an "abomination."

"Why would we want to encourage and get up here and say, 'Let them do it?' This is absolutely ridiculous, change from a man to a woman. It'll never work. These folks are going to enter their life and they're going to regret because they've made a change," Wooten said.

Bentley said it would be better for children dealing with gender dysphoria to be "left alone" and resolve the situation once they're older.

Dr. Michele Hutchison, an Arkansas endocrinologist who has worked with hundreds of transgender young people, told a House committee on Tuesday that puberty-blocking drugs are sometimes used to prevent a child working through gender identity from developing secondary sex characteristics, which can be distressing for them, to buy time.

But the average age of her patients, who are treated with cross-sex hormones, is about 17, and most of them have already hit puberty. Patients are in intensive psychotherapy before she treats them with hormones, Hutchison said.

"It takes a long time to get on hormones, even if you're older," Rumba Yambu, director of Intransitive, an Arkansas transgender-rights organization, said Tuesday. Yambu, who is transgender, added: "The U.S. Supreme Court has recognized time and time again parents' constitutional right to care, custody and control of their children."

The House's vote was largely along party lines, though two Republicans broke ranks to vote against the bill. The two are Reps. Spencer Hawks of Conway and Lee Johnson of Greenwood, who is a physician.

The Trevor Project, a national suicide prevention organization for LGBTQ youths, said in a statement lamenting the bill's passage in the House on Wednesday that it has supported more than 850 crisis contacts in Arkansas, which is less than 6% of the number of Arkansas' LGBTQ youths that it estimates are in crisis and could benefit from The Trevor Project's services.

Arkansas is one of 14 states that has introduced legislation to ban gender transition treatment for youths in 2021 legislative sessions, according to the National Center for Transgender Equality.

HB1570, SB354 and other pieces of legislation like them moving through state legislatures across the country are opposed by a number of health and education groups, including the American Academy of Pediatrics, the National Education Association and groups for mental health professionals.

"All of our nation's young people deserve equal protection and treatment when accessing health care, and when attending school and participating in extracurricular activities, including sports," an open letter signed by the groups and released earlier this week reads.

In a statement Wednesday evening, Gov. Asa Hutchinson said he was still reviewing the bills and following the debate, and he had no stated position. 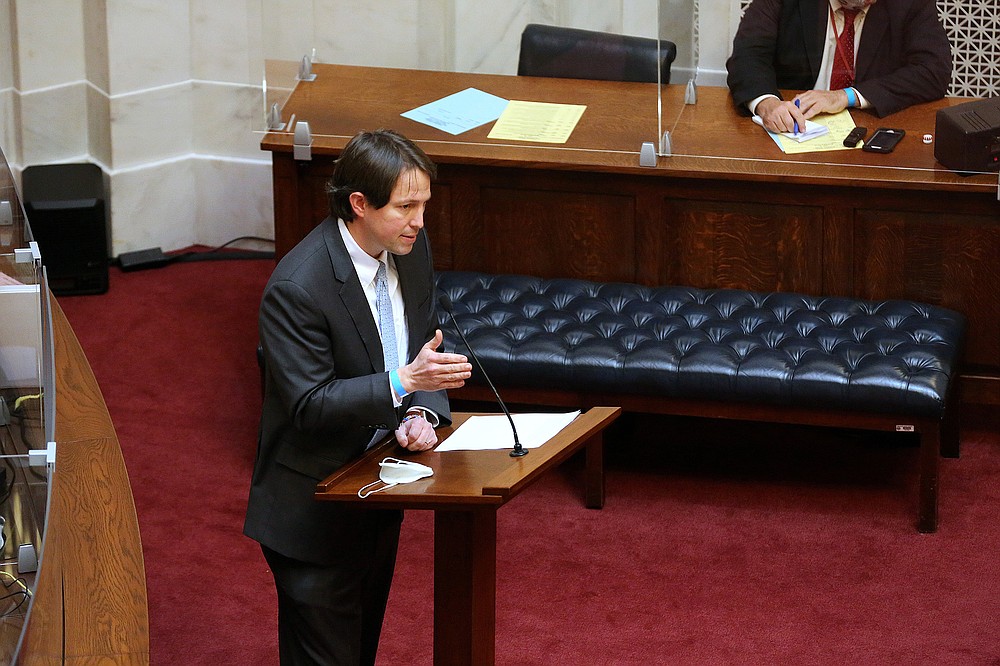 “That word sex in the federal civil rights act prohibits discrimination on the basis of sexual orientation or gender identity,” Sen. Clarke Tucker, D-Little Rock, said Wednesday in speaking against Senate Bill 354. “This bill targets kids who we know are having a very hard time in high school and this will only make their lives harder,” he said. (Arkansas Democrat-Gazette/Thomas Metthe)
ADVERTISEMENT