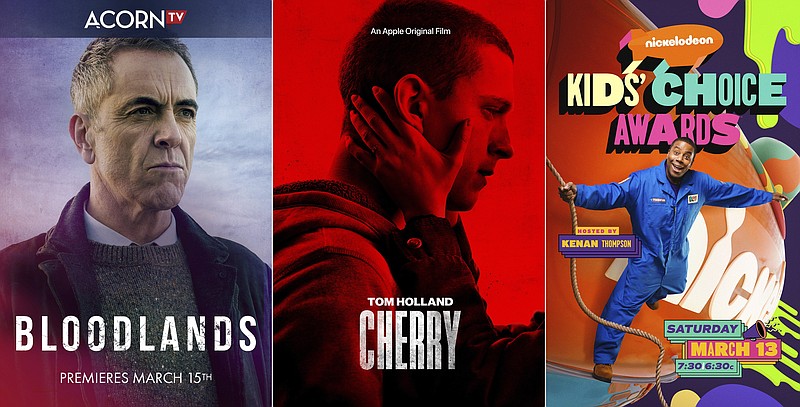 Here's a collection culled by The Associated Press' entertainment journalists of what's arriving on TV, streaming services and music platforms this week.

◼️ Anthony and Joe Russo, the filmmaking brothers behind the "Avengers" movies, pivot in a different direction on "Cherry," a new drama about PTSD and drug addiction. Tom Holland stars as a combat medic who suffers psychologically after returning from tours in Iraq and Afghanistan. A doctor prescribes him OxyContin, and his subsequent opioid addiction leads to a life of bank robbing. The film, based on Nico Walker's best-selling semi-autobiographical novel, premieres Friday on Apple TV+. In their first directorial project since "Avengers: Endgame," the Russos employ their blockbuster aesthetic on a stylized and self-indulgent American crime drama.

◼️ The late days of winter, let alone of a pandemic, can drag anyone down. It's a good time to break out some Preston Sturges. Thankfully, on Sunday, The Criterion Channel will premiere an eight-film series of the screwball master — a body of work that stands as one of the sublime and most absurdly entertaining in all of movies. Many of them come from Sturges' early '40s blitz: "The Great McGinty," "Christmas in July," "Sullivan's Travels," "The Palm Beach Story," "The Miracle of Morgan's Creek." But look out, also, for 1948's lesser-known "Unfaithfully Yours," a daringly sinister comedy in which a conductor (Rex Harrison) spends a concert fantasizing about how he'll respond to the wife (Linda Darnell) he believes has had an affair. For slapstick, it is gloriously dark.

◼️ Selena Gomez is tapping into her Mexican roots with her first Spanish-language project. "Revelación" is coming out Friday and features collaborations with Puerto Rican performers Rauw Alejandro and Myke Towers as well as French producer DJ Snake, whom Gomez worked with on the pop and Latin hit "Taki Taki," also featuring Cardi B and Ozuna.

◼️ After topping the charts with his brothers, Nick Jonas is going solo again. The pop star and "The Voice" mentor will release "Spaceman" on Friday. It is the 28-year-old's fourth solo effort.

◼️ Here's an anniversary we all fervently hope is one-and-done: that of the coronavirus pandemic. "Jimmy Kimmel Live!" is marking the dire milestone today with a special episode titled the "Coronaversary Show." Biden administration cabinet member Pete Buttigieg, who was a substitute host a year ago to the day, is back as a guest along with Joel McHale and musical guest Adam Duritz. The episode, billed as a commemoration of "our national incarceration," airs at 10:35 p.m. on ABC.

◼️ Grown-ups don't have a lock on awards shows, as Nickelodeon's Kids' Choice Awards proves once again. The ceremony promises to be a virtual "wild ride" that, yes, will include slime. Top nominees include Justin Bieber, who is scheduled to be among the performers; Ariana Grande; "Stranger Things" and "Wonder Woman 1984." Kenan Thompson of "Saturday Night Live" will host the event airing at 6:30 p.m. Saturday on channels including Nickelodeon and Nick Jr.

◼️ A decades-old cold case involving a series of disappearances is at the heart of the Irish crime thriller "Bloodlands," debuting Monday on the Acorn TV streaming service. James Nesbitt stars as a veteran detective forced to explore his own troubled past during the investigation. The country's history also is part of the mystery. The four-part drama's cast includes Charlene McKenna ("Peaky Blinders") and Ian McElhinney ("Game of Thrones").