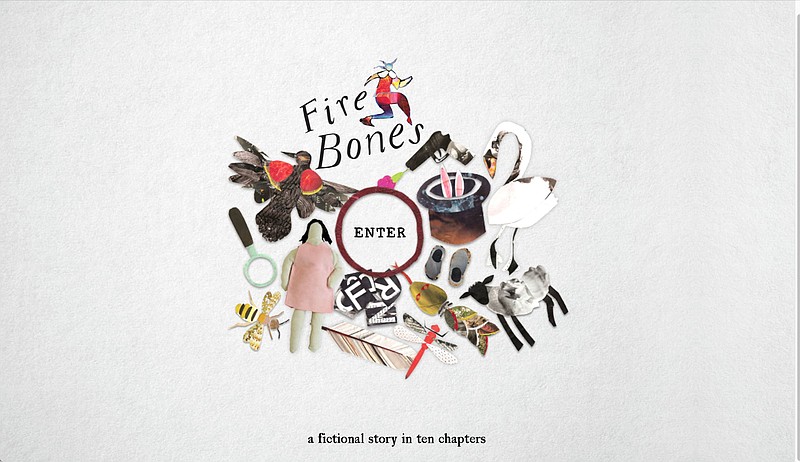 This is the landing page for “Fire Bones,” a multimedia storytelling project, designed for the internet by Arkansas poet Greg Brownderville, who now teaches at Southern Methodist University, and Bart Weiss, a professor of film at the University of Texas at Arlington.

If you blinked for a few seconds last year, you might have missed the debut and the shuttering of Quibi, a streaming service that offered audiences entertainment intended for cellphones. There were a host of series that ran in 10-minute segments, but few felt like paying monthly fees to watch them. Legions of people who want to see model Chrissy Teigen presiding over a courtroom, but not enough to download the app.

You can't critique the content if it's not around long enough to examine.

Perhaps if DreamWorks co-founder Jeffrey Katzenberg had wanted to create "go-shows" worthy of an audience's iPhone or laptop, he shouldn't have courted his Hollywood acquaintances.

He should have come to Arkansas.

"Fire Bones" at www.firebones.org is a ten-chapter experience that defies easy categorization.

Set in the fictional Arkansas Delta town of Thisaway, the framework involves the disappearance of ferry pilot and Pentecostal preacher Amra Boustani (Meriam Khalfouf) who has disappeared while delivering an armed cropduster to the United Arab Emirates. We hear her story from the point of view of a woman whom she adopted named Gobody (Kristin Keith), an Asian-American grocer (Raymund King) who loved the missing woman, Amra's replacement at the pulpit (Chris Gardner) and one of her vocal detractors (Brittney Bluitt).

The website is divided into audio and video segments that range from convincing fabrications (the opening podcast about Boustani could have passed for the real thing had it included plugs for Hello Fresh) to head spinningly absurd. There's a 10-year-old Lebanese YouTube journalist named Boulos (Nhedrick Jabier), who might be a budding Bob Woodward or a juvenile Alex Jones, depending on when you catch him.

The series incorporates ­real-world political and ethnic tensions with esoteric nods to figures like poet Wallace Stevens. In "Fire Bones," you can dine at the Emperor of Ice Cream. The "go-show" also has a structure like a William Faulkner novel like "As I Lay Dying" because the story or stories are told from different points of view.

"Amra is this character that people project things onto. She was beautiful. She was evil. She was all kinds of things to all kinds of people. For Gobody, she's one kind of person. For others, she's a person who's taking money from poor people who don't have money to give in her church," says director Bart Weiss via Zoom from Dallas.

Writer Greg Brownderville adds, "In regard to race, the contested narrative about her identity is straddling that racial line. Some people see Amra as a white, Christian terrorist (her Maronite Christian family were persecuted back in Lebanon) meddling in political affairs that she has no business meddling in. Other people see her as an Arabic terrorist who is teaming up with terrorists in the Middle East or the Levant. That ambiguity is alive in American society. Middle Eastern people, last time I checked, are considered white by the U.S. Census, but in real life they are often treated with disdain or seen as nonwhite."

Brownderville and Weiss currently live in Dallas and recruited most of their talent from the DFW area. The former is the director of creative writing at Southern Methodist University and edits Southwest Review. The Philadelphia-raised Weiss is a professor of film at the University of Texas at Arlington and produces "Frame of Mind" on KERA TV.

Nonetheless, the series was shot and recorded primarily from Augusta, Biscoe, Cotton Plant, Dark Corner, Gregory, Heber Springs, Helena and other Delta towns. I almost gave myself carpal tunnel typing a partial list of the towns in question.

Having grown up there, Brownderville knows the real Delta the way his characters know Thisaway.

"I was born in the Arkansas Delta. I lived there my entire life until I left for college at the age of 18," he recalls. "Then I went back to the Delta and lived for several years and was collecting folk tales and folk music and folk art and actually working at a local newspaper [The Woodruff County Monitor, now the Woodruff County Monitor-Leader-Advocate]. The Delta is rich with material for any kind of writer." In fact, Brownderville credits the language of his birthplace for getting him into Stevens' poems.

When asked if making Brownderville's combination of folk art, podcasting, poetry, music and high and low literature work was a challenge, Weiss laughs and says, "There were a lot of ideas. There were things in Arkansas, things in Los Angeles, things in Honduras. The project does have a multitude of things and a multitude of characters. It was going to be complex, but it sounded exciting and energizing and wonderful. How could I not be part of that?"

"Fire Bones," which takes its name from Amra's church, is a technical marvel. I saw portions of it on my laptop and caught other portions on my iPhone. The images, sound and interface worked the same regardless of which operating system I was using. The dense sound mixes were especially impressive because my headphones and earbuds each got a workout. If you like the music, Brownderville, who helped compose and perform it, is putting together a vinyl record release.

If the technical aspects of the site are as slick as a Bill Clinton handshake, the Delta-inspired design, artwork and lettering look homespun.

Brownderville explains, "People in the Delta are very playful with images and with language. There is a kind of desolation to the landscape, and there's a great deal of poverty in the area. People react to that beautifully by creating interesting things. You see a lot of homemade art in the Delta. People's yards have homemade art. Businesses will make their own signs rather than paying professionals to make them. We saw homemade speed limit signs when we were shooting."

From talking with the two men, it seems as if love is the one thing they had that Katzenberg and company lacked.

Throughout the 90-minute conversation, Weiss talks about portions of "Fire Bones" as if he's in the digital audience instead of having served as a director, producer and on-camera talent.

When I asked him why he, Brownderville and legions of Texans and Arkansans succeeded where others failed, he replied, "I had the pleasure of working with a lot of great people. The thing with Quibi is they had too much money, so they threw money at everybody's project that nobody else would fund. So, they had celebrities attached to C and D-rated properties. They didn't have anything that people wanted to see. The problem wasn't the format. The problem was what they had."